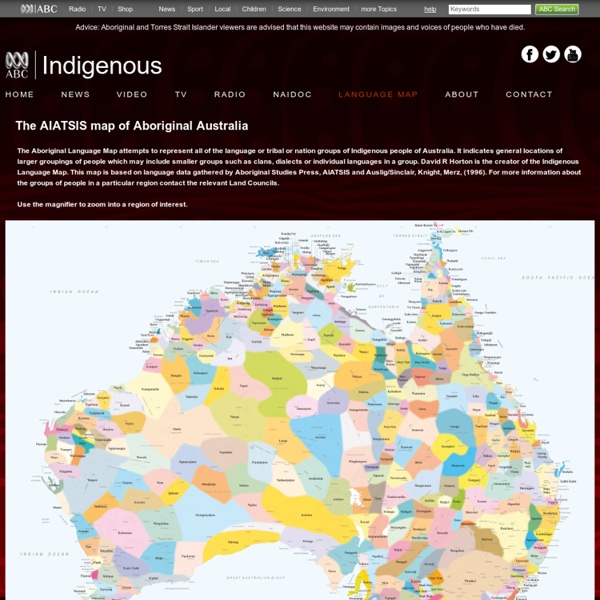 The Aboriginal Language Map attempts to represent all of the language or tribal or nation groups of Indigenous people of Australia. It indicates general locations of larger groupings of people which may include smaller groups such as clans, dialects or individual languages in a group. David R Horton is the creator of the Indigenous Language Map. This map is based on language data gathered by Aboriginal Studies Press, AIATSIS and Auslig/Sinclair, Knight, Merz, (1996). For more information about the groups of people in a particular region contact the relevant Land Councils. Use the magnifier to zoom into a region of interest. David R Horton, creator, © Aboriginal Studies Press, AIATSIS and Auslig/Sinclair, Knight, Merz, 1996. This map is just one representation of other map sources that are available for describing Aboriginal Australia.

Why a connection to country is so important to Aboriginal communities Trying to frame this concept in modern language, is like trying to grasp a two dimensional cup out of a piece of paper, it's the layers that make the cup palpable, not the drawing of it. Connection to country is inherent, we are born to it, it is how we identify ourselves, it is our family, our laws, our responsibility, our inheritance and our legacy. To not know your country causes a painful disconnection, the impact of which is well documented in studies relating to health, wellbeing and life outcomes. Modern constructs of identification do not work for us, in fact they dismantle the fabric that holds us together. For example, it matters not that my licence says that I live in Sydney, it matters that I am guest in this place, I respect it because I am from the Arrente and Luritja lands, and it is this knowledge that enables me to identify who I am, who my family is, who my ancestors were and what my stories are. What if I told you I can travel through time and worlds?

Indigenous Weather Knowledge - Bureau of Meteorology Aboriginal and Torres Strait Islander people have developed an intricate understanding of the environment over many thousands of years. Artist: Laurie Nilsen The artwork used in the design of this website represents the relationships between seasonal, meteorological and astronomical changes - and how the Mandandanji people read these changes to inform life on country.  Australians Together More than soil, rocks or minerals For many Indigenous people in Australia, land is much more than soil, rocks or minerals. It’s a living environment that sustains and is sustained by people and culture. Traditionally, this reciprocal relationship between people and the land underpinned all other aspects of life for Indigenous people.

A History of Aboriginal Sydney There is good evidence of a high Aboriginal population density at contact. Australia has a naturally occurring diversity of plant resources, rather than a few specific staples as in Papua New Guinea. These are easier to exploit if not planted. That is to say, Koori people are Polyculturists. The population may have been increasing at the time of the invasion. Butlin has calculated that the population certainly did not survive on kangaroos alone as a meat source. Australian Sacred Sites Australian Sacred Sites Aboriginal sacred sites are areas or places in Australia of significant Aboriginal Australian meaning within the animist context of the localised indigenous belief system. Most are somehow related to Aboriginal mythology, known as 'The Dreaming, or The Dreamtime'.

Guide to Aboriginal sites and places - Creative Spirits You can find Aboriginal sites everywhere in Australia. Even in heavily urbanised environments like Sydney many Aboriginal places survive. This guide outlines different Aboriginal sites and explains what Aboriginal people used them for [1]. Aboriginal history Barani Barani is an Aboriginal word of the Sydney language that means 'yesterday'. The Barani website examines the histories of people, places and events associated with Sydney's Aboriginal and Torres Strait Islander peoples. Visit Barani The first Sydneysiders Aboriginal peoples have always lived in Sydney . The many uses of indigenous plants - Science (4,7) 00:00:00:00Text on screen - 'Viewer Advice. Aboriginal and Torres Strait Islander viewers are advised that the following media resource may contain images and voices of people who have died.' A group of Indigenous people distribute and plant native plants in Australian coastal bushland. Text on screen - 'The Towra Team. Clarence Slockee.'00:00:16:19CLARENCE SLOCKEE:These young people are called the Towra Team.

Meaning of land to Aboriginal people - Creative Spirits What does land mean to Aboriginal people? Non-Indigenous people and land owners might consider land as something they own, a commodity to be bought and sold, an asset to make profit from, but also a means to make a living off it or simply 'home' . They 'develop' land, as if it was unfinished or raw.