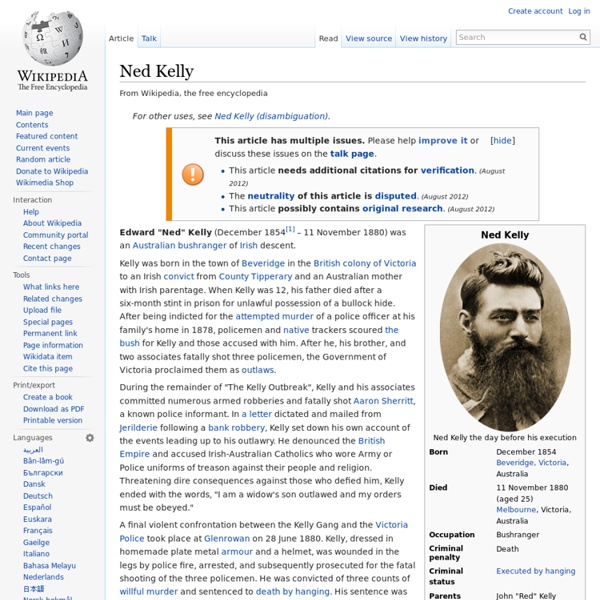 Edward "Ned" Kelly (December 1854[1] – 11 November 1880) was an Australian bushranger of Irish descent. Kelly was born in the town of Beveridge in the British colony of Victoria to an Irish convict from County Tipperary and an Australian mother with Irish parentage. When Kelly was 12, his father died after a six-month stint in prison for unlawful possession of a bullock hide. During the remainder of "The Kelly Outbreak", Kelly and his associates committed numerous armed robberies and fatally shot Aaron Sherritt, a known police informant. A final violent confrontation between the Kelly Gang and the Victoria Police took place at Glenrowan on 28 June 1880. Even before his execution, Kelly had become a legendary figure in Australia. Family background and early life Kelly's boyhood home, built by his father in Beveridge in 1859 At age 11, Kelly saved a young boy from drowning in a creek and was awarded this green sash in recognition of his bravery. Rise to notoriety Harry Power

Everyday life In 19th century Melbourne free land was scarce, housing was a problem, and when times got tough, people turned to alcohol. Those who watched the city grow tell the story of how the streets were named, when the first brewery appeared, and how a woman got by in a man's world. The witty observations of an Irish journalist tell the real story of life in Port Phillip. Hard times and economic woes made the lure of alcohol all too tempting for Melbourne's common folk. After some initial problems, Melbourne's city grid became an iconic feature of a rapidly growing town. Melbourne's population in the 1800s reflected the city's growth as a bustling metropolis. Melbourne's city street names link directly to the story of colonial life in Port Phillip. Almost since their arrival, settlers had felt strongly that Port Phillip deserved to be a separate colony. Female convicts and free settlers were a small but important part of Port Phillip's development.

Ned Kelly On Tuesday morning, to the disgust of some of the onlookers, the body was taken outside and slung up against a door to be photographed. The features were composed in a natural way and easily recognised. The face had full, fine forehead, blue eyes, downy moustache and a bushy beard covering a full chin, whilst the curly hair had recently been cut. The figure was of a well built, lithe young fellow and the face beautiful, nevertheless the spectacle was repulsive. Joe's high-heeled boots were his trademark, being referred to as larrikin heels during late nineteenth century Victoria. My name is Ned Kelly, I’m known adversely well. He was reputed to have a number of girlfriends in the towns of the Kelly country and, at the height of the hunt for the gang, he used to slip into Beechworth to drink in the back bars of hotels there. Accounts say that, a moment before the bullet struck Joe Byrne dead, he offered the toast “Here's to the bold Kelly Gang!”.

Jerilderie Letter The document known as the Jerilderie Letter was dictated by famous Australian bushranger Ned Kelly to fellow Kelly Gang member Joe Byrne in 1879. It is one of only two original Kelly documents known to have survived.[1] Ned Kelly the day before his execution by hanging in November 1880. The Jerilderie Letter is a 56-page document of approximately 8,000 words. It is a longer and more detailed version of the Cameron/Euroa Letter which Kelly sent to a member of the Victorian Legislative Assembly and the police in December 1878. Two copies were made of Ned Kelly's letter, one by publican John Hanlon and one by a government clerk. Ned Kelly and the Kelly Gang[edit] Cameron/Euroa Letter[edit] On 14 November 1878, the day before the members of the Kelly Gang were outlawed, a Victorian parliamentarian criticised the progress of the police hunt for the gang. On 9 December 1878, the Kelly Gang robbed the National Bank in Euroa, Victoria, after taking hostages at Younghusband's station nearby.

John Gilbert John Gilbert (1842?-1865), bushranger, was born in Hamilton, Canada, son of William John Gilbert. In October 1852 he arrived at Melbourne in the Revenue with his family. In May 1863 Gilbert returned to the Weddin Mountains and became Ben Hall's right-hand man although they did not always work together. Gilbert and Dunn were proclaimed outlaws in April under the Felons Apprehension Act with £1000 on each of their heads. Citation details Edgar F. 1840 – 1900 | Australia's migration history timeline | NSW Migration Heritage Centre Circular Quay, Charles Percy Pickering, 1871. Courtesy State Library of New South Wales By 1869, there were six colonies in Australia – New South Wales, Tasmania, Western Australia, South Australia, Victoria and Queensland – all settled by British people. These separate colonies all had their own governors, parliaments and systems of government reporting to Britain. As the interior was explored and mapped, squatters and free settlers followed and Aboriginal people were pushed from their homelands. The discovery of gold sent a shock wave through Colonial Australia. Chinese in Lambing Flat riots, December, 1860. Chinamen at work on the gold fields. Immigrant ships brought thousands of people keen to try their luck at the diggings. The Chinese diggers moved from goldfield to goldfield within New South Wales and across the border. Samuel Sweet, Overland telegraph party, J.A.G. Colonial governments sought to free up more land for all these people.

Bushranger History[edit] More than 2000 bushrangers are believed to have roamed the Australian countryside, beginning with the convict bolters and drawing to a close after Ned Kelly's last stand at Glenrowan.[3] 1850s: gold rush era[edit] The bushrangers' heyday was the Gold Rush years of the 1850s and 1860s as the discovery of gold gave bushrangers access to great wealth that was portable and easily converted to cash. Their task was assisted by the isolated location of the goldfields and a police force decimated by troopers abandoning their duties to join the gold rush.[3] George Melville was hanged in front of a large crowd for robbing the McIvor gold escort near Castlemaine in 1853.[3] 1860s to 1870s[edit] Bushranging numbers flourished in New South Wales with the rise of the colonial-born sons of poor, often ex-convict squatters who were drawn to a more glamorous life than mining or farming.[3] Much of the activity in this era was in the Lachlan Valley, around Forbes, Yass and Cowra.[3]