Meat pie: a great Australian dish. What do you call a seven-course meal in Australia? 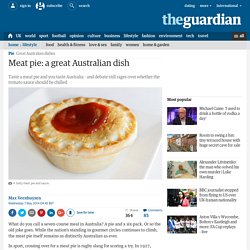 A pie and a six-pack. Or so the old joke goes. While the nation’s standing in gourmet circles continues to climb, the meat pie itself remains as distinctly Australian as ever. Australian Biscuits, Scones & Damper. Australian biscuits are many and varied much the same as anywhere else really, we do have our favourites and those that have become well known and identifiable as Australian. 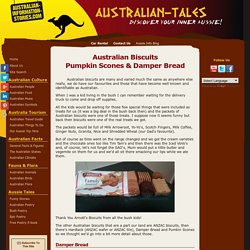 When I was a kid living in the bush I can remember waiting for the delivery truck to come and drop off supplies. All the kids would be waiting for those few special things that were included as treats for us (it was a big deal in the bush back then) and the packets of Australian biscuits were one of those treats. I suppose now it seems funny but back then biscuits were one of the real treats we got. Anzac biscuit. An Anzac biscuit is a sweet biscuit, popular in Australia and New Zealand, made using rolled oats, flour, desiccated coconut, sugar, butter, golden syrup, baking soda and boiling water. 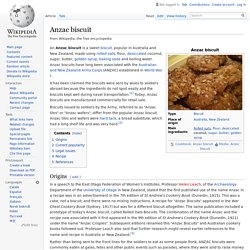 Anzac biscuits have long been associated with the Australian and New Zealand Army Corps (ANZAC) established in World War I. It has been claimed the biscuits were sent by wives to soldiers abroad because the ingredients do not spoil easily and the biscuits kept well during naval transportation.[1] Today, Anzac biscuits are manufactured commercially for retail sale. Australia's cuisine culture: a history of our food. IN ADELAIDE IN THE 1950s, my grandmother was our family cook, turning out such standards as shepherd's pie, lamb chops, and apple pie and custard. 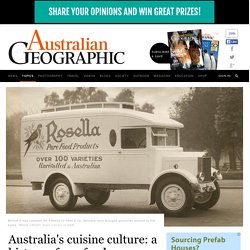 She cooked tripe in white sauce as a treat. The History of Australian Food. Prior to European colonisation in the 18th century, Aboriginal Australians survived for thousands of years on a hunter-gatherer diet. 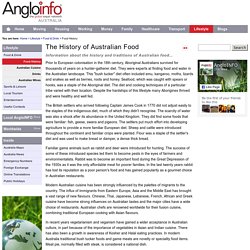 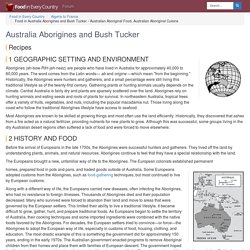 The word comes from the Latin words— ab and origine —which mean "from the beginning. " Historically, the Aborigines were hunters and gatherers, and a small percentage were still living this traditional lifestyle as of the twenty-first century. Gathering plants or hunting animals usually depends on the climate. Central Australia is fairly dry and plants are sparsely scattered over the land. Damper recipe Australia Campfire or Kitche Damper Recipes. Australia Day Recipes collection - www.taste.com.au. Taste.com.au Popular Searches: 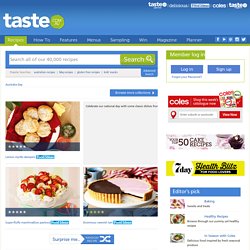 The pavlova: New Zealand or Australian dessert? Forget duelling over Russell Crowe, Crowded House or Jane Campion, it’s the origins of the pavlova that really piques the interests of Aussie and Kiwis feuding over stolen cultural 'treasures'. 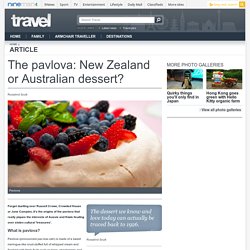 What is pavlova? Pavlova (pronounced pav-low-vah) is made of a sweet meringue-like crust stuffed full of whipped cream and finished with fresh fruits such as kiwis, strawberries and other colourful berries. The dessert is overwhelmingly agreed to be an Antipodean dish. Australian Icon Vegemite. Vegemite is uniquely Australian and a fair dinkum Aussie icon with 90 percent of Aussies having a jar in their pantry.

Vegemite is a nutritious product, one of the richest sources known of Vitamin B. One of the most popular ways to eat Vegemite is to toast some bread, butter it and then spread on the Vegemite. If an Aussie is being honest with you, they'll admit that it's an acquired taste. With Vegemite, you either love it or can't stand it. Our experience has been that if you're raised eating it when you're very young, you generally like it as an adult. We don't know of anyone who ate it for the first time as an adult and liked it. See also on our website Happy Little Vegemites Song History of Vegemite Vegemite had its beginnings when a young chemist named Dr Cyril P Callister developed a remarkable new spread from brewer's yeast. Aussie fruit flag. Australian food history timeline - Arnott's launch Tim Tams. 16 Things You Didn't Know About Tim Tams. Tim Tam Slam - an Australian Coffee Break Ritual. 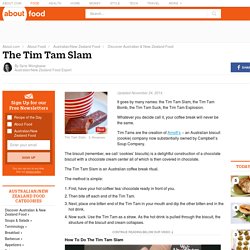 It goes by many names: the Tim Tam Slam, the Tim Tam Bomb, the Tim Tam Suck, the Tim Tam Explosion. Whatever you decide call it, your coffee break will never be the same. Tim Tams are the creation of Arnott’s -- an Australian biscuit (cookie) company now substantially owned by Campbell’s Soup Company. The biscuit (remember, we call ‘cookies’ biscuits) is a delightful construction of a chocolate biscuit with a chocolate cream center all of which is then covered in chocolate.

The Tim Tam Slam is an Australian coffee break ritual. The method is simple: First, have your hot coffee/ tea/ chocolate ready in front of you.Then bite off each end of the Tim Tam.Next, place one bitten end of the Tim Tam in your mouth and dip the other bitten end in the hot drink.Now suck. Continue reading below our video Loaded: 0% Progress: 0% Australian food history timeline - Lamingtons invented.