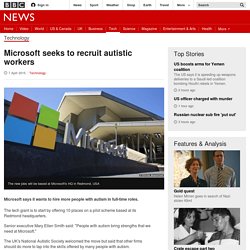 The tech giant is to start by offering 10 places on a pilot scheme based at its Redmond headquarters. Senior executive Mary Ellen Smith said: "People with autism bring strengths that we need at Microsoft. " The UK's National Autistic Society welcomed the move but said that other firms should do more to tap into the skills offered by many people with autism.

Announcing the new scheme in a blog, Ms Smith said: "Each individual is different, some have an amazing ability to retain information, think at a level of detail and depth or excel in math or code. " Specialist recruitment firm, Specialisterne, will help run a new hiring scheme. Uranium mining in Australia. Ranger Uranium Mine, number 3 pit Quarterly expenditure ($millions) on uranium exploration since 1988 Annual Australian production of uranium (thousand tonnes) since 1989 Radioactive ores were first extracted at Radium Hill in 1906, and Mount Painter in South Australia in the 1930s, to recover radium for medical use. 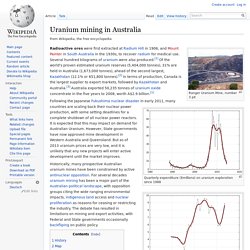 Several hundred kilograms of uranium were also produced.[1] Of the world's proven estimated uranium reserves (5,404,000 tonnes), 31% are held in Australia (1,673,000 tonnes), ahead of the second largest, Kazakhstan (12.1% or 651,800 tonnes).[2] In terms of production, Canada is the largest supplier to export markets, followed by Kazakhstan and Australia.[3] Australia exported 50,235 tonnes of uranium oxide concentrate in the five years to 2008, worth A$2.9 billion.[1] Following the Japanese Fukushima nuclear disaster in early 2011, many countries are scaling back their nuclear power production, with some setting deadlines for a complete shutdown of all nuclear power reactors. 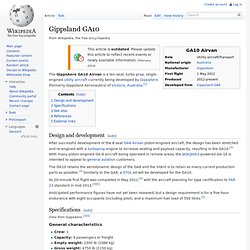 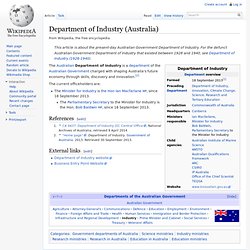 Centre for Biotechnology and Interdisciplinary Sciences (BioDeakin) How do I get to BioDeakin? 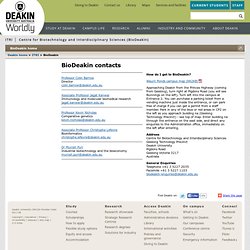 Waurn Ponds campus map (982KB) Approaching Deakin from the Princes Highway (coming from Geelong), turn right at Pigdons Road (you will see Bunnings on the left). Creative Skillset - Supporting Creative Industries. Hitachi to move rail business to UK from Japan. 20 March 2014Last updated at 05:09 ET Hitachi's transport businesses moving to the UK could pave the way for a jobs boost in the future Japanese electronics firm Hitachi says it will move its global rail business from Japan to the United Kingdom. 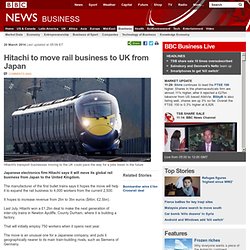 The manufacturer of the first bullet trains says it hopes the move will help it to expand the rail business to 4,000 workers from the current 2,500. It hopes to increase revenue from 2bn to 3bn euros ($4bn; £2.5bn). Last July, Hitachi won a £1.2bn deal to make the next generation of inter-city trains in Newton Aycliffe, County Durham, where it is building a factory. That will initially employ 750 workers when it opens next year. The move is an unusual one for a Japanese company, and puts it geographically nearer to its main train-building rivals, such as Siemens of Germany. Government backs industry-led CreateUK to drive UK economy and creative industries. At an event hosted by Facebook last night (2 July), business secretary Vince Cable and culture secretary Savid Javid backed the new scheme and the CIC’s plan to focus on five key creative areas. 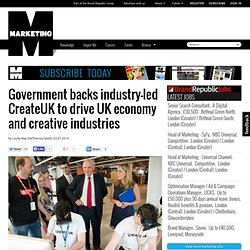 The five point plan outlines as its key areas of focus: education and skillsthe creative industry’s access to financethe creation of an industry communications infrastructureensuring an intellectual property frameworkand a focus on international business in terms of exports and inward investment. The CIC claims that the creative industries generated more than £71bn gross value added in 2012, which it said is a 9.4% increase from the year previously and one that surpassed the growth of any other UK industry sector.

Europe launches largest civilian robotics research program, worth $3.8BN. A partnership between private-sector robotics firms and the European Commission has been launched, aiming to out-invest the United States, Japan and South Korea in developing the potential of robots. 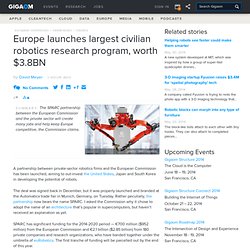 The deal was signed back in December, but it was properly launched and branded at the Automatica trade fair in Munich, Germany, on Tuesday. Rather peculiarly, the partnership now bears the name SPARC. I asked the Commission why it chose to adopt the name of an architecture that’s popular in supercomputers, but haven’t received an explanation as yet. SPARC has significant funding for the 2014-2020 period — €700 million ($952 million) from the European Commission and €2.1 billion ($2.85 billion) from 180 private companies and research organizations, who have banded together under the umbrella of euRobotics.