New Inventors: Tribute to - Tribute to: Aeroguard. Aerogard’s been keeping flies off people for about forty years but who almost became the first woman in the entire world to test aerogard? 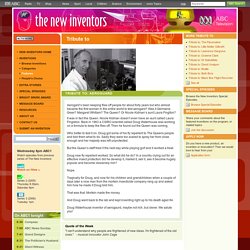 Was it Germaine Greer? Margaret Whitlam? The Queen? Or Nicole Kidman’s aunt Laura Finglton? It was in fact the Queen. Who better to test it on. But the Queen’s staff tried it the next day while playing golf and it worked a treat. Doug new fly repellent worked. Nope. Tragically for Doug, and now for his children and grandchildren when a couple of days later a nice man from the mortein insecticide company rang up and asked him how he made it Doug told him. That was that. And Doug went back to the lab and kept inventing right up to his death aged 84. Doug Waterhouse inventor of aerogaurd, maybe not rich, but clever. Aussie Inventions: 09/10/2012, Behind the News. Australia has always had a reputation for punching above its weight in sport. 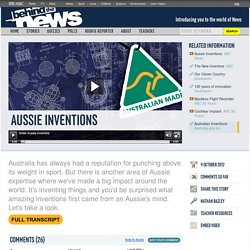 But there is another area of Aussie expertise where we've made a big impact around the world. It's inventing things and you'd be surprised what amazing inventions first came from an Aussie's mind. Let's take a look. YOUNG INVENTOR: I've been working on my prototype for about a year and a half now. YOUNG INVENTOR: My invention is designed for teenagers YOUNG INVENTOR: It's fully functional and it works and I've tested it and everything. Australia Innovates - Powerhouse Museum. Achievements A-Z - CSIROpedia - CSIROpedia. Australian Inventions. The Hills Rotary Hoist, launched in 1946. 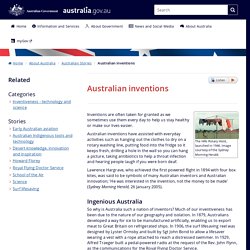 Image courtesy of the Sydney Morning Herald. Inventions are often taken for granted as we sometimes use them every day to help us stay healthy or make our lives easier. Australian inventions have assisted with everyday activities such as hanging out the clothes to dry on a rotary washing line, putting food into the fridge so it keeps fresh, drilling a hole in the wall so you can hang a picture, taking antibiotics to help a throat infection and hearing people laugh if you were born deaf.

Lawrence Hargrave, who achieved the first powered flight in 1894 with four box kites, was said to be symbolic of many Australian inventors and Australian innovation; 'He was interested in the invention, not the money to be made' (Sydney Morning Herald, 26 January 2005). Ingenious Australia So why is Australia such a nation of inventors? Another reason is that as a nation, we recognise the value of a culture that promotes new ways of doing things.

Medical advances. 14 awesome things you never knew were invented by the CSIRO. The CSIRO is behind a number of internationally renowned inventions, like extended-soft wear contact lenses. 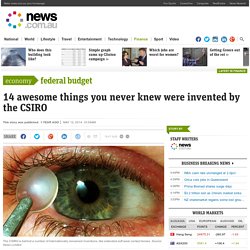 Source: News Limited IT’S responsible for some of the world’s most exciting innovations, from Wi-Fi to Aerogard and plastic banknotes. But the Commonwealth Scientific and Industrial Research Organisation (CSIRO) is one of a host of government agencies bracing for deep funding cuts in tomorrow’s budget, which could see them lose up to $150 million from the bottom line. The organisation, which works with nearly 2000 companies on diverse projects that bring in millions in government revenue, is also slated for job cuts amid fears more than 26,000 public sector workers could lose their jobs.

27 things you didn’t know about CSIRO (that could help you win the next trivia comp) By Lou Morrissey We’re often the secret ingredient behind the things that have improved your life. 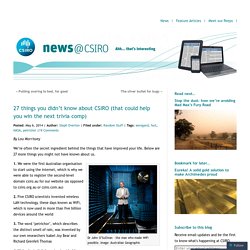 Below are 27 more things you might not have known about us. Dr John O’Sullivan – the man who made WiFi possible. Australian Inventions. Every day throughout the world over a billion people rely heavily on Australian inventions. 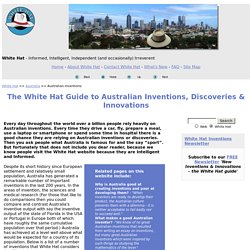 Every time they drive a car, fly, prepare a meal, use a laptop or smartphone or spend some time in hospital there is a good chance they are relying on Australian inventions or discoveries. Then you ask people what Australia is famous for and the say “sport”. But fortunately that does not include you dear reader, because we know people visit the White Hat website because they are Intelligent and Informed. Despite its short history since European settlement and relatively small population, Australia has generated a remarkable number of important inventions in the last 200 years. 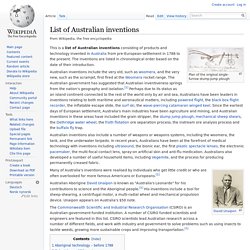 The inventions are listed in chronological order based on the date of their introduction. Australian inventions also include a number of weapons or weapons systems, including the woomera, the tank, and the underwater torpedo. In recent years, Australians have been at the forefront of medical technology with inventions including ultrasound, the bionic ear, the first plastic spectacle lenses, the electronic pacemaker, the multi-focal contact lens, spray-on artificial skin and anti-flu medication. Australians also developed a number of useful household items, including Vegemite, and the process for producing permanently creased fabric. 10 Aussie inventions that make your life easier. AUSTRALIANS ARE PROLIFIC inventors. 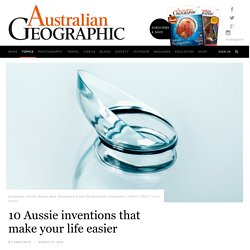 From the earliest Aboriginal inventions including boomerangs, woomeras, and didgeridoos, Australia boasts a rich history of innovation. Aussie researchers have spearheaded medical breakthroughs including the manufacture of penicillin as an antibiotic and the development of the cochlear implant. The technology behind Google Maps and the black box flight recorder are products of Australian ingenuity. The following is a list of everyday items that make our lives easier - for which we have Aussies to thank. World-changing Aussie inventions. Inventions in Australia - akubra, blundstone, drizabone, backless briefs. Aussie inventor Terry Bediavas and his ingenious revolutionary locust muncher invention Australians have invented quite a few things over the years. 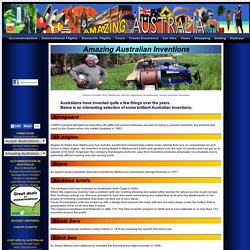 Below is an interesting selection of some brilliant Australian inventions; Aeroguard CSIRO invented Aerogard to keep flies off cattle and prevent diseases. As well as being a summer essential, the product was used by the Queen when she visited Australia in 1963. Air engine. Australian Inventions. Black box flight recorder invented in Melbourne - 80 Days That Changed Our Lives - ABC Archives. Australian inventor of the 'bionic ear' conducts the world's first cochlear implant operation - 80 Days That Changed Our Lives - ABC Archives.