Public discussion enters the age of the uninformed - The Drum. Updated Thu 10 May 2012, 8:32am AEST Can somebody tell me what happened? 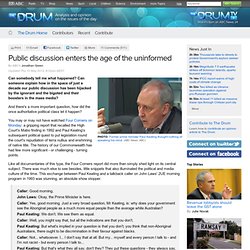 Fact file: What Tony Abbott promised on tax - Fact Check. Updated 23 minutes ago When is a promise a promise? 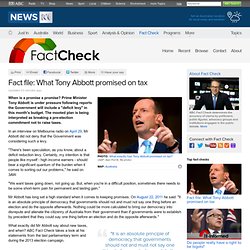 Prime Minister Tony Abbott is under pressure following reports the Government will include a "deficit levy" in this month's budget. The mooted plan is being interpreted as breaking a pre-election commitment not to raise taxes. In an interview on Melbourne radio on April 29, Mr Abbott did not deny that the Government was considering such a levy. "There's been speculation, as you know, about a deficit reduction levy. "We want taxes going down, not going up. Mr Abbott has long set a high standard when it comes to keeping promises.

"It is an absolute principle of democracy that governments should not and must not say one thing before an election and do the opposite afterwards. " What exactly did Mr Abbott say about new taxes, and when? Bait and switch. In the course of raillery with the famously scabrous Thames watermen, Boswell reports that Dr Samuel Johnson triumphed with the line “Sir, your wife, under pretence of keeping a bawdy-house, is a receiver of stolen goods”‘ That insult is applicable, with minimal modification to the Institute of Public Affairs. 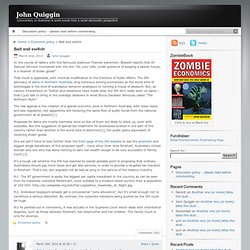 The IPA advocacy of dams in Northern Australia, long notorious among economists as the worst kind of boondoggle is the kind of scandalous behavior analogous to running a house of pleasure. But, as various interactions on Twitter and elsewhere have made clear, the IPA isn’t really keen on dams – that’s just bait to bring in the nostalgic believers in what Bruce Davidson famously called “The Northern Myth” Why The Mining Tax Won't Pay The Bills. In political circles, they sometimes describe it as "policy on the run". 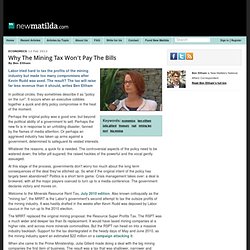 It occurs when an executive cobbles together a quick and dirty policy compromise in the heat of the moment. Perhaps the original policy was a good one, but beyond the political ability of a government to sell. Perhaps the new fix is in response to an unfolding disaster, fanned by the flames of media attention. Or perhaps an aggrieved industry has taken up arms against a government, determined to safeguard its vested interests. Labor stews over fix for mining tax. A letter from Prime Minister Julia Gillard to independent MP Rob Oakeshott says the government shares concerns about the interaction of state royalties and the mining tax. 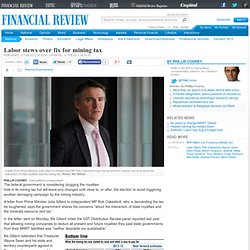 Senate failure on Newstart. Andrew Podger Senator Chris Black, chair of the Senate committee inquiring into the adequacy of allowances for job-seekers which released its report last Thursday, justifies his committee’s failure to recommend any increase in Newstart because no one would tell it where the money would come from. 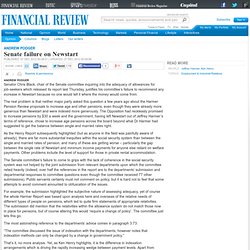 The real problem is that neither major party asked this question a few years ago about the Harmer Pension Review proposals to increase age and other pensions, even though they were already more generous than Newstart and were indexed more generously. The Opposition had recklessly promised to increase pensions by $30 a week and the government, having left Newstart out of Jeffrey Harmer’s terms of reference, chose to increase age pensions across the board beyond what Dr Harmer had suggested to get the balance between single and married rates right. Drum Post: The Industrial War that Isn’t. My Drum post looks at talk about how the IR legislation is now too pro-union. 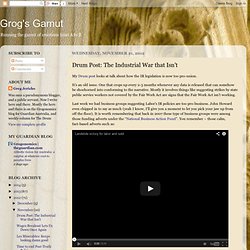 It’s an old issue. One that crops up every 2-3 months whenever any data is released that can somehow be shoehorned into conforming to the narrative. Mostly it involves things like suggesting strikes by state public service workers not covered by the Fair Work Act are signs that the Fair Work Act isn’t working. Last week we had business groups suggesting Labor’s IR policies are too pro-business. John Howard even chipped in to say as much (yeah I know, I’ll give you a moment to let you pick your jaw up from off the floor). India's thorium-based nuclear dream inches closer - tech - 09 November 2012. SINCE India began its nuclear programme in the 1950s, it has aimed to tap the ample thorium reserves that lie within its borders. 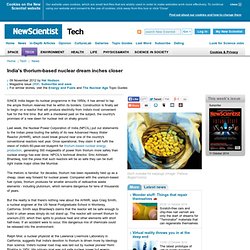 Construction is finally set to begin on a reactor that will produce electricity from India's most convenient fuel for the first time. But with a checkered past on the subject, the country's promises of a new dawn for nuclear rest on shaky ground. Last week, the Nuclear Power Corporation of India (NPCIL) put out statements to the Indian press touting the safety of its new Advanced Heavy Water Reactor (AHWR), which could break ground near one of the country's conventional reactors next year. Once operational, they claim it will fulfil the vision of India's 60-year-old blueprint for thorium-based nuclear energy production, generating 300 megawatts of power from thorium more safely than nuclear energy has ever done. The rhetoric is familiar: for decades, thorium has been repeatedly held up as a cheap, clean way forward for nuclear power.

More From New Scientist. Gillard Gambles It All On Asylum Seekers. Can We Be Any More Productive? "Productivity isn't everything, but in the long run it is almost everything", said Paul Krugman, an economist generally seen as being on the "progressive" side of politics. 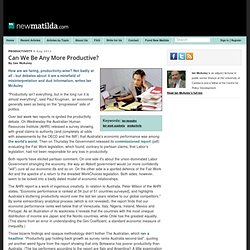 Over last week two reports re-ignited the productivity debate. On Wednesday the Australian Human Resources Institute (AHRI) released a survey showing, with great claims to authority (and completely at odds with assessments by the OECD and the IMF) that Australia's economic performance was among the world's worst. Then on Thursday the Government released its commissioned report (pdf) evaluating the Fair Work legislation, which found, contrary to partisan claims, that Labor's legislation, had not been responsible for any loss in productivity. Both reports have elicited partisan comment. China stamps Australian dollar with reserve currency status. Every click you make, they'll be watching. Agencies want access to texts, and social media such as Facebook and Twitter. 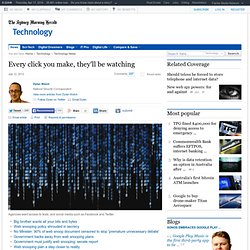 THE telephone and internet data of every Australian will be retained for up to two years and intelligence agencies would be given increased access to social media sites such as Facebook and Twitter, under a suite of new proposals from Australia's intelligence community.

Paltry Newstart Allowance is fast becoming a poverty trap. Despite ongoing uncertainty about global economic conditions, prosperity in Australia remains both very high and relatively widespread. But there is one group in Australia who has not shared in our rising national prosperity at all: people receiving unemployment payments (Newstart Allowance). People reliant on pensions and benefits are recognised as being amongst the poorest in our community.

Age and disability pensioners have always received higher payment rates than the unemployed. But since 1997, when the Howard government started to index pensions to average weekly earnings but continued to index unemployment payments to the consumer price index, the gap has widened significantly. How can you survive on Newstart? - The Drum Opinion. Find More Stories How can you survive on Newstart? Rachel Siewert. Gillard rallies her troops for the final round. Every time Julia Gillard’s desperate Government looks at some policy or event as a potential circuit-breaker, things seem to get worse rather than better. But hope springs eternal. Gillard and her inner circle now believe they can use a return to surplus, and the Budget that brings it about, as a platform for a political recovery. This was the basis of a speech - a revving-up lecture - that the prime minister delivered to a special meeting of federal Cabinet on Tuesday night.

Eye popping politics: Hockey 'entitled' to candour - The Drum. Updated Fri 20 Apr 2012, 6:51am AEST Every now and again, Joe Hockey stands up and says something so completely correct that his colleagues automatically want to track him down and thump him. Like in February last year, when – amid an ugly controversy over whether taxpayers should pay for asylum seekers to bury their dead from the Christmas Island tragedy – Mr Hockey shamed his colleagues with a dignified handful of words: "I would never seek to deny a parent or child from saying goodbye to their relative.

" Or when he shut down, later last year, Coalition enthusiasm for forcing Craig Thomson to remain in Parliament when his wife was due: "We're not going to deny the right of a person to be at the birth of their child. " This time, though, Joe's really done it. Razor gangs and welfare reformers must not lose sight of evidence. Australia could learn from Asia when it comes to welfare ... Joe Hockey. Photo: Gary Schafer. US quantitative easing a point of interest for RBA - The Drum Opinion.

Find More Stories US quantitative easing a point of interest for RBA Greg Jericho. Nominal GDP Targeting (QE3) Will Not Work Redux. Swan's Zero-Sum Surplus. The pots and kettles - Meganomics Blog. Swan's budget challenge and the surplus non-debate - The Drum Opinion - This year talk of the budget has gone from the usual individual measures to be included or cut, to the actual size of the budget itself, and whether or not it should be in surplus. (A. Budget surplus: economic or political imperative? - The Drum Opinion - The shrill and empty-headed political debate over budget surplus is a prime example of how politics completely overshadows sensible economics.

These Drones Will Irritate The Neighbours. What do Australians regard as a ‘middle income’? It’s been well documented that reports of Australians’ incomes sometimes betray a fair bit of ignorance about what constitutes a typical or a high income. I’ve been interested in whether most Australians share this tendency of some journalists to imagine that a family comfortably ensconced in the upper echelons of the income distribution is actually on a ‘middle income’. Do people really think that $150 000 or $200 000 a year is typical? A recent Essential Report by EMC tried to find this out.

Productivity in a nutshell - The Drum Opinion. Trend growth truths - The Drum Opinion - The whole claim of "returning to trend growth" rather fails when you hold it up to the light of reality. Find More Stories. Tax. Think of the Business Council as a dog chasing a car. Wednesday column. The frozen gales of political bluster are near - The Drum Opinion - The frozen gales of political bluster are near. Winter is coming - insulate yourself with some facts. Find More Stories. Australia is not growing at trend - macrobusiness.com.au.

Why is Australia so opposed to debt? Keynes the key to maintaining Australia's economic health. Economy faltering – Australia’s wind-up Treasurer “We will cut harder” The Soft Economy - Australia. Faith in Politics. The Global Financial Crisis.