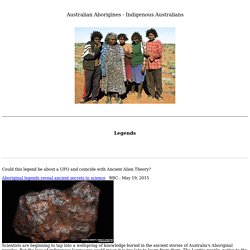 Aboriginal legends reveal ancient secrets to science BBC - May 19, 2015 Scientists are beginning to tap into a wellspring of knowledge buried in the ancient stories of Australia's Aboriginal peoples. But the loss of indigenous languages could mean it is too late to learn from them. Current scientific discoveries seem to verify Aboriginal legends passed down for millennia. Egyptian Link with Australia: Carvings in NSW, Gympie Pyramid and Ape. Ancient Egyptian Link with Australia Anubis Email from John Takacs The Egyptian carvings in Australia are just down the road from us at Kariong, NSW. 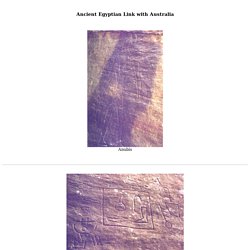 Here is a photo of my son at the carvings. He is now 16. There use to be a tunnel down to go under the main bolder. Didgeridoo, Didjeridu. Didgeridoo The didgeridoo (also known as a didjeridu or didge) is a wind instrument developed by Indigenous Australians of northern Australia around 1,500 years ago and still in widespread usage today both in Australia and around the world. 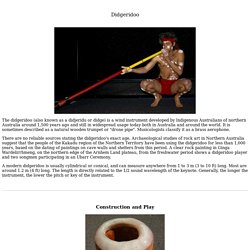 It is sometimes described as a natural wooden trumpet or "drone pipe". Musicologists classify it as a brass aerophone. There are no reliable sources stating the didgeridoo's exact age. Ancient tunnels in New Zealand. Ancient Tunnels, underlying an historical site in New Zealand. 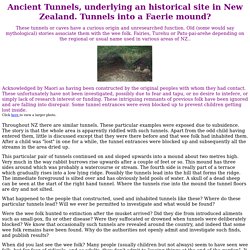 Tunnels into a Faerie mound? These tunnels or caves have a curious origin and unresearched function. Old (some would say mythological) stories associate them with the wee folk. Fairies, Turehu or Patu-pai-arehe depending on the regional or usual name used in various areas of NZ.. Acknowledged by Maori as having been constructed by the original peoples with whom they had contact. Throughout NZ there are similar tunnels. This particular pair of tunnels continued on and sloped upwards into a mound about two metres high. 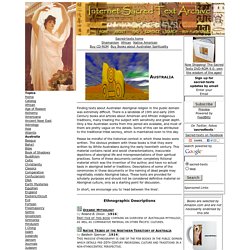 There is a landslide of 19th and early 20th Century books and articles about American and African indigenous traditions, many treating the subject with sensitivity and great depth. Only a few Australian works from this period are available, and most of them are pretty vague on the details. Some of this can be attributed to the traditional tribal secrecy, which is maintained even to this day.

Please be mindful of the historical context in which these books were written. In short, we encourage you to 'read between the lines'. Ethnographic Descriptions Oceanic Mythology by Roland B. The Native Tribes of Central Australia by Baldwin Spencer and F. Works of K. Australian Legendary Tales collected by K. The Euahlayi Tribe by K.

THE ABORIGINAL CREATION MYTH. The Lost Lands of Mu and Lemuria: Was Australia Once Part of a Sunken Continent? Lemuria and Mu are interchangeable names given to a lost land believed to have been located somewhere in either the southern Pacific or Indian Oceans. 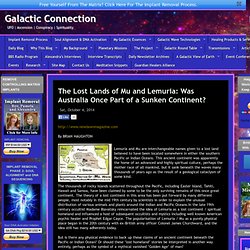 This ancient continent was apparently the home of an advanced and highly spiritual culture, perhaps the mother race of all mankind, but it sank beneath the waves many thousands of years ago as the result of a geological cataclysm of some kind. The thousands of rocky islands scattered throughout the Pacific, including Easter Island, Tahiti, Hawaii and Samoa, have been claimed by some to be the only surviving remains of this once great continent.

But is there any physical evidence to back up these claims of an ancient continent beneath the Pacific or Indian Ocean? Sacred Texts - Australia. Sacred-texts home Shamanism African Native AmericanBuy CD-ROM Buy Books about Australian Spirituality Finding texts about Australian Aboriginal religion in the public domain was extremely difficult. 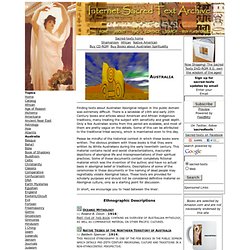 Australian Mythology - the gods and spirits of Aborigine Oz. Like most 'discovered' countries, Australia had already been discovered by its original inhabitants - the Aborigines. 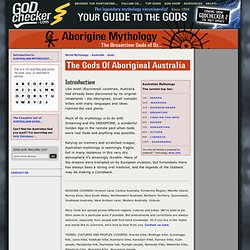 Small nomadic tribes with many languages and ideas roamed the vast plains. Much of Oz mythology is to do with Dreaming and the DREAMTIME, a wonderful Golden Age in the remote past when Gods were real Gods and anything was possible. Relying on memory and scratched images, Australian mythology is seemingly fragile, but in many instances in this very dry atmosphere it's amazingly durable. Many of the dreams were trampled on by European invasion, but fortunately there has always been a strong oral tradition, and the legends of the Outback may be making a Comeback. REGIONS COVERED: Arnhem Land, Central Australia, Kimberley Region, Melville Island, Murray River, New South Wales, Northeastern Australia, Northern Territory, Queensland, Southeast Australia, West Arnhem Land, Western Australia, Victoria. Many Gods are spread across different regions, cultures and tribes. 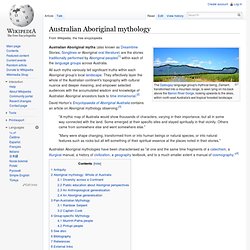 All such myths variously tell significant truths within each Aboriginal group's local landscape.