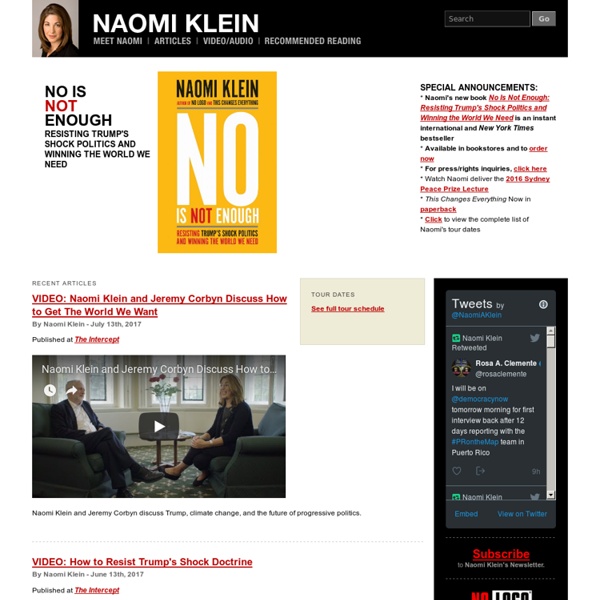 Published at The Intercept Now that it seems virtually certain that Donald Trump will withdraw the United States from the Paris climate accord, and the climate movement is quite rightly mobilizing in the face of this latest dystopian lurch, it’s time to get real about something: Pretty much everything that is weak, disappointing, and inadequate about that deal is the result of U.S. lobbying since 2009. The fact that the agreement only commits governments to keeping warming below an increase of 2 degrees, rather than a much safer firm target of 1.5 degrees, was lobbied for and won by the United States. The fact that the agreement left it to individual nations to determine how much they were willing to do to reach that temperature target, allowing them to come to Paris with commitments that collectively put us on a disastrous course toward more than 3 degrees of warming, was lobbied for and won by the United States.

John Nichols Protesters in Wisconsin, 2011, where communities are voting to amend the constitution. (Darren Hauck/Reuters) Even as the US Supreme Court attempts to expand the scope and reach of the already dangerous dominance of our politics by billionaires and their willing servants, Americans are voting in overwhelming numbers against the new politics of dollarocracy. The headline of the week with regard to the campaign-finance debate comes from Washington, where a 5-4 court majority has—with its McCutcheon v. Federal Election Commission decision—freed elite donors such as the politically-ambitious Koch Brothers to steer dramatically more money into the accounts of favored candidates, parties and political action committees. The decision makes it clear that the high court's activist majority will stop at nothing in their drive to renew the old Tory principle that those with wealth ought to decide the direction of federal, state and local government.

Susan George Susan George: How to win the Class War November 2013 The Transnational Institute is proud to present Susan George's compelling satirical 'guide for corporate leaders': How to win the Class War – The Lugano Report II Debt, austerity, devastation July 2013 Margo Kingston Margo Kingston (born 1959) is an Australian journalist, author, and commentator. She is best known for her work at The Sydney Morning Herald and her weblog, Webdiary. Since 2012, Kingston has been a citizen journalist, reporting and commenting on Australian politics via Twitter and her own Web site. Early life and education[edit] Projects — Angus MacRae A truly international collaboration with artist Gregory Euclide and Düsseldorf based trio InsaDonjaKai, Thesis 07 is a collection of new works for pitched percussion, piano, two cellos and analog synths, forming part of a larger series of collaborations with musicians around the world. Released on a strictly limited edition of 10" vinyl, with unique artwork for each record. More info. "The desire to create the project sprung from the love of music. The desire to run the project as a vinyl only limited release sprung from the way in which I saw myself consuming music. I wanted the music on my terms… in my car, on vacation, portable and always present.

Altercation Senate Majority Leader Harry Reid (AP Photo/J. Scott Applewhite) My new Nation column is called "The Right Loses It Over Russia—Again" and it notes that "Conservative hysteria over Putin's aggression in 2014 is eerily reminiscent of right-wing reaction to a previous Crimean adventure, at the dawn of the Cold War. Alter-reviews: Rise of Neoliberal and Undemocratic Europe What is the continuity you see between the moment of Maastricht through the Lisbon Agenda and the Lisbon Treaty, to the Six Pack and now this new Fiscal Treaty? The Maastricht Treaty was a treaty that presented two completely arbitrary figures: 3 percent budget deficit with regard to the GNP and 60 percent for the debt. Why not 4 per cent or 2 per cent? Why not 55 or 65 per cent? Nobody knows.

Guilt - roots and liberation In his thought-provoking essay The Happiness Conspiracy (NI 391), John F Schumaker described the damaging psychological and social effects of a society single-mindedly fixated on the pursuit of personal happiness above all other concerns. ‘No-one is less able to sustain happiness than someone obsessed with feeling only happiness,’ he observed. By chance, Schumaker’s essay appeared in the NI special issue on carbon offsets (CO²nned), in which I alluded to guilt as one of the possible motivating factors behind people’s desire to ‘neutralize’ their ‘carbon footprints’.

James Fallows This morning I had the privilege of giving the commencement address at the University of Vermont—UVM, home of the Catamounts, in Burlington. My wife Deb and I, and our colleague John Tierney, visited UVM several years ago and wrote about it in our American Futures series, notably with John’s piece about the school’s emergence as a “public Ivy.” Seven Days, the financially-and-journalistically successful weekly based in Burlington (which I’ve also written about), has a story about today’s commencement, here.

Alan Greenspan’s Perpetual Motion Machine I formally propose that Alan Greenspan, former Chairman of the Federal Reserve, be considered for the Nobel Prize. Not for the prize in economics, a field in which Mr. Greenspan has shown a very limited grasp, but for the prize in physics. His remarkable accomplishment is related to the invention of the world’s first perpetual motion machine. Many physicists (and a few economists) claim that a perpetual motion machine is impossible, but Mr. Anita Roddick Dame Anita Roddick, DBE (23 October 1942 – 10 September 2007) was a British-born international businesswoman, human rights activist and environmental campaigner, best known as the founder of The Body Shop, a cosmetics company producing and retailing natural beauty products that shaped ethical consumerism.[1][2] The company was one of the first to prohibit the use of ingredients tested on animals and one of the first to promote fair trade with third world countries. Roddick was involved in activism and campaigning for environmental and social issues, including involvement with Greenpeace and The Big Issue. In 1990, Roddick founded Children On The Edge, a charitable organisation which helps disadvantaged children in eastern Europe and Asia.[3]

CV - Moshtari Hilal Moshtari Hilal is a visual artist and researcher living in Hamburg and Berlin. Her work is shaped by the (self)portrait and family archive. With a special focus on analogue drawing, Moshtari considers her overall practice nonetheless to be interdisciplinary and process-oriented. While her process begins with the personal as a resource, it involves as well academic research and the engagement with the public, in form of lectures, essays, artist talks, interviews and social media.

Related:
Related:  Personen   -  Design Thinking for Schools   -  THE STONE - Opinionator - NYTimes.com - NYTimes.com   -  Naomi Klein: Addicted to risk | Video on TED.com   -  Teaching Kids Design Thinking, So They Can Solve The World's Biggest Problems | Co.Design | business + design   -  Srimad Bhagavad-Gita   -  Buddhist meditation - Wikipedia, the free encyclopedia   -  Bodhisattva Quotes - We live in a world where we have to hide to make...   -  Design Thinking: Lessons for the Classroom | Edutopia   -  Spirit Quotes - Inspiring Quotes of Spiritual Teachers, Philosophers & Mystics   -  A Quick Guide To Managing A Classroom Full Of iPads | Edudemic   -  10 Things in School That Should Be Obsolete | MindShift   -  Eliminative materialism - Wikipedia, the free encyclopedia   -  Logic Fallacies List   -  5 Must-Know Tips For Deploying iPads In Your Classroom | Edudemic   -  A Basic Buddhism Guide: Buddhism and the God-idea   -  THE BASIC TEACHING OF BUDDHA   -  40 Simple Ways To Use A Smartphone In The Classroom   -  iClassroom iManagement – tips for managing an iPad classroom | Reflections of a Passionate Educator   -  10 Must-Have Apps For iPads In The Classroom - Edudemic   -  The 20 Best Education Apps And Web Tools Of The Year - Edudemic   -  10 Great Apps for a Teacher’s New iPad | iPad Apps for School   -  17 Real-World Ways iPads Are Being Used In Schools - Edudemic   -  Mirror iPad, iPhone, iPod to Your Screen for Free   -  The Residential School System   -  30 Incredible Ways Technology Will Change Education By 2028   -  The Thirteen Mindfulness Trainings - Ayahuasca-Wasi   -  Down for Maintenance - Orientalia   -  The Conversation: In-depth analysis, research, news and ideas from leading academics and researchers.   -  61 Educational Apps For The 21st Century Student   -  Buddhism   -  MinecraftEdu :: Home   -  What is 3D printing? How does 3D printing work?   -  45 Design Thinking Resources For Educators   -  A history of residential schools in Canada   -  Truth and Reconciliation Commission of Canada (TRC)   -  Naomi Klein : « Le mouvement Occupons Wall Street est actuellement la chose la plus importante au monde » - Basta !   -  Buddhist Geeks by Personal Life Media on Apple Podcasts