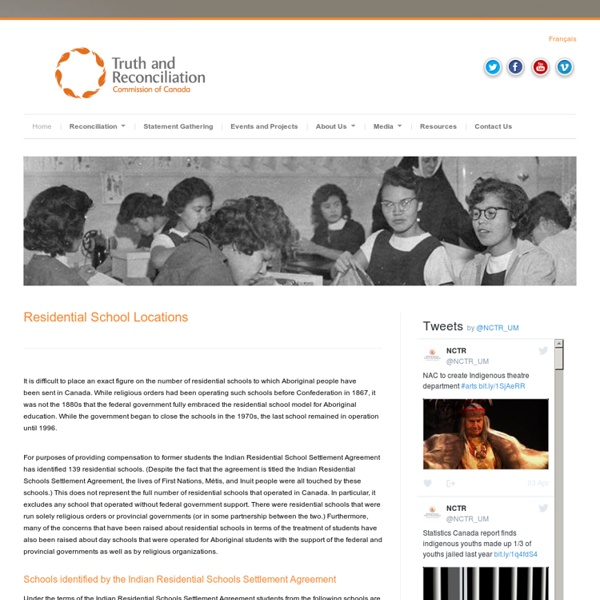 10 books about residential schools to read with your kids - Aboriginal - CBC More and more children will be read stories about the legacy of residential schools in the classroom this year. Provinces are changing curriculums and educators across the country are developing resource guides in response to the Truth and Reconciliation Commission (TRC) recommendations. "One of the first criteria for choosing anything is that it's a good story," said Jo-Anne Chrona. It opens up that space for conversation. - Jo-Anne Chrona, educator For parents reading these books at home to their children, Chrona says it's important to be mindful of what's appropriate, emotionally and developmentally. "Talk with your children about what it is that they're reading, what it is that they understand," she said. "It opens up that space for conversation." The following ten books reflect on the residential school experience in different ways. Shi-shi-etko, by Nicola Campbell (Ages 4-8) Shi-shi-etko by Nicola I. Shin-chi's Canoe, by Nicola Campbell (Ages 4-8)

Heritage Minutes Dive Into 'Darker Chapters' Of Canada's History Two new Heritage Minutes released Tuesday focus on significant moments in Indigenous history. The clips, produced by Historica Canada, were written by acclaimed author Joseph Boyden, according to a press release. One of the videos tells the story of Chanie Wenjack, an Anishinaabe boy who ran away from the Cecilia Jeffrey Indian Residential School in 1966 and died during his escape to go home. 'Chanie wanted to go back home' "His death sparked the first inquiry into the conditions faced by residential school students," reads the Historica Canada release. The Wenjack minute, embedded above, is narrated by his sister Pearl Achneepineskum, a residential school survivor. "Chanie wanted to go back home," she says in the video. "I survived residential school. The clip ends with an aerial shot of a lifeless Wenjack lying next to a train track. Chanie Wenjack ran away from a residential school in 1966. The second clip is titled “Naskumituwin (Treaty).” You can watch the Naskumituwin video below: Close

Teacher Guides/Lesson Plans | Project of Heart Many organizations have already constructed curriculum that you may find useful with your learner group. The First Nation Child and Family Caring Society have constructed lesson plans that assist educators that aim to teach about social justice issues. These guides include campaigns which FNCFCS promote and encourage all Canadians to create awareness and make a difference! Education Resources K-2 Education Resources 3-6 Education Resources 7-8 Education Resources 9-12 Sherryl Maglione is a teacher who has taught exclusively in First Nation schools during her entire sixteen-year teaching career, most recently senior high English Language Arts at the Sioux Valley High School in Brandon, Manitoba. The Law Project was created by Monro Communications for British Columbia Social Studies Teachers’ Association. 8th Fire Where are the Children

SECRET PATH - GORD DOWNIE and JEFF LEMIRE Jordan's Principle | The Caring Society Report a Jordan's Principle case The Caring Society is keeping track of unresolved Jordan's Principle cases. If you think you have encountered a Jordan's Principle case, we would like to hear from you. Updates Background Jordan’s Principle is a child-first principle named in memory of Jordan River Anderson, a First Nations child from Norway House Cree Nation in Manitoba. Payment disputes within and between federal and provincial governments over services for First Nations children are not uncommon. In a landmark ruling on January 26, 2016, the Canadian Human Rights Tribunal ordered the federal government to immediately stop applying a limited and discriminatory definition of Jordan’s Principle, and to immediately take measures to implement the full meaning and scope of the principle. On July 6, 2016, INAC submitted a compliance report to the Tribunal providing an update on its implementation of the principle. Resources

Chanie Wenjack Chanie “Charlie” Wenjack (born 19 January 1954; died 23 October 1966 near Redditt, ON). Chanie Wenjack, an Anishinaabe boy from Ontario, ran away from his residential school near Kenora at age 12, and subsequently died from hunger and exposure to the harsh weather. His death in 1966 sparked national attention and the first inquest into the treatment of Indigenous children in Canadian residential schools. Personal family photo of Chanie "Charlie" Wenjack. (courtesy Pearl Achneepineskum) Early Life Wenjack grew up at Ogoki Post, on the Marten Falls Reserve, with his parents, sisters and two dogs. Cecilia Jeffrey Indian Residential School Located near Kenora, Ontario, the Cecilia Jeffrey School was run by the Women’s Missionary Society of the Presbyterian Church in Canada, and paid for by the federal government. Wenjack started residential school at Cecilia Jeffrey when he was nine years old and was placed in grade one. Escape Children ran away frequently from residential schools. Death Inquest

How Chanie Wenjack chose Joseph Boyden Chanie Wenjack. (The Wenjack Family) The story has all the hallmarks of great tragedy: an innocent boy lost in the vast wilds of northern Ontario in late October. He’s desperately trying to make his way home as the weather begins its brutal turn. What makes this story even more tragic is that it’s true. A few years ago now, Mike Downie, the brother of the Tragically Hip’s singer Gord Downie, found an article written in this very magazine way back in 1967; he introduced it to Gord, and then Gord to me. MORE: Read the story that inspired it all I don’t want to assume much on Gord’s behalf, but I think it’s safe to say that the image of this little boy just trying to get home haunted him as much as it did me. In my own corner, I’d been working on a novel called Seven Matches I hoped to finish in time for an October 2016 release date. MORE: Our review of Boyden’s Wenjack Nicole suggested I write a long story, a novella, in commemoration instead. But why this particular boy?

Chanie Wenjack Born 19 January 1954; died 23 October 1966 At age 9, Chanie Wenjack was sent to the Cecilia Jeffrey Residential School, near Kenora, Ontario. Chanie ran away from school at age 12 and died during his attempt to return home. His death sparked the first inquest into the treatment of Indigenous children at residential schools. Chanie grew up in Ogoki Post, on the Anishinaabe Marten Falls Reserve in Northern Ontario, where he lived with his family until he was taken from them to attend residential school in 1963. The Cecilia Jeffrey Residential School was run by the Women’s Missionary Society of the Presbyterian Church and funded by the Canadian government. >Chanie Wenjack and two friends escaped from the playground on the afternoon of 16 October 1966. Setting off alone, clothed in a thin cotton shirt and pants, Chanie carried only one small glass jar of matches. Chanie’s death and the subsequent investigation prompted nationwide questioning of the morality and ethics of residential schools.

Although the government has put in effect a program to try to repay for the horrors they committed to the aboriginals through the intermediate of residential schools, still many of the victims will not get any compensation because this plan only includes the native-Canadians, not the Metis or the Inuits. by brunetcarrier Oct 31

This site lists the all the residential schools across Canada. It helps us understand the magnitude of the schools effect on the nation in the late 1800s to mid 1900s. However, this site does'nt contain all the residential schools, so you can imagine just how mnay there were across Canada. We find the number of schools shocking since there are over 75 of them. by hazbounwasher Oct 26

The truth and reconciliation comity of Canada is in charge of trying to mend the wounds of the aboriginals that were sent to residential schools by giving them apology money, but they can only legally compensate federal residential school, because unlike the schools that were run by a province or the church, they have ties to the federal government. This causes conflict because the people at the schools that weren’t run by the Canadian government probably went through just as many if not more traumatic events, but it is said that nothing can be done to help mend their torn souls. by bertoia.bobotis.dufresne. Oct 24

This web page shows how many residential school existed in Canada, though not all of them are in this list, only the ones who are identified which makes it a total of 139 schools, so they're a chances that they are still a lot more schools. This seems like a good and trustworth website, it also has a map where they show you where exactly are situated these residential schools. We find it absurd to have so many of these school across Canada because these school have hundreds of aboriginal attending one school and to think they are 139 of them, makes it have thousdans of Idian physically, mantally and sexually abused. by chenglaitung Oct 24