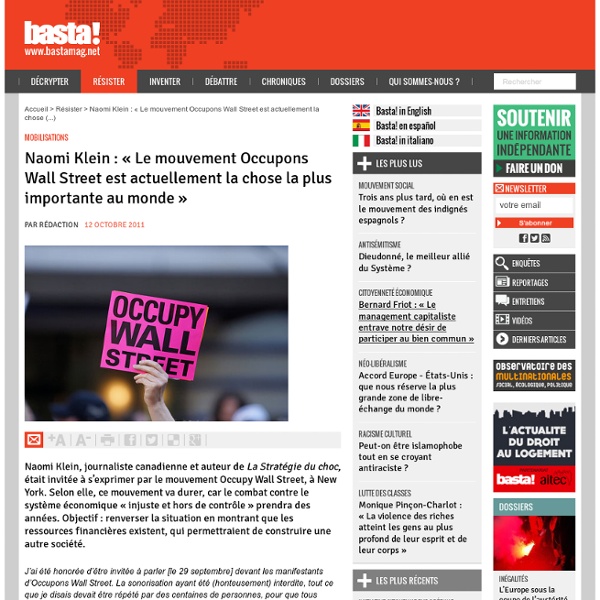 5 Crucial Lessons for the Left From Naomi Klein’s New Book This post first appeared at In These Times. Naomi Klein (Photo: Dale Robbins) In her previous books The Shock Doctrine: The Rise of Disaster Capitalism (2007) and NO LOGO: No Space, No Choice, No Jobs (2000), Canadian author and activist Naomi Klein took on topics like neoliberal “shock therapy,” consumerism, globalization and “disaster capitalism,” extensively documenting the forces behind the dramatic rise in economic inequality and environmental degradation over the past 50 years. But in her new book, This Changes Everything: Capitalism vs. the Climate (due in stores September 16), Klein casts her gaze toward the future, arguing that the dangers of climate change demand radical action now to ward off catastrophe. She certainly isn’t alone in pointing out the urgency of the threat, but what sets Klein apart is her argument that it is capitalism — not carbon — that is at the root of climate change, inexorably driving us toward an environmental Armageddon in the pursuit of profit. 1.

Occupy Wall Street Run on Citibank Ends in Arrests [VIDEO] (twitter.com/celakabat) Around 2:30 p.m. on Saturday, the Occupy Wall Street Livestream captured about 20 people being arrested outside a Citibank at La Guardia Place in New York. A protester announced via human mic that people had gone inside Citibank to close their accounts. They were asked to leave and complied, he said, but the bank’s security guards locked them in until the N.Y.P.D. arrived. “Some wanted to close their accounts with Citibank,” he read from a cell phone. “When asked to leave, they began to exit but were locked in by security.

America's Teacher The Shock Doctrine author interviews Michael Moore on the roots of the economic crisis and the promise and peril of this political moment. About the Author Naomi Klein Naomi Klein is an award-winning journalist, syndicated columnist, fellow at The Nation Institute and author of the... In Spite of Elections and "Camping Bans," Revolutionary Wave Grows A look back at Occupy Oakland before it was razed. In a world devastated by poverty, austerity cuts, and bank foreclosures, community action like Occupy Oakland’s recent attempt to turn a derelict building into a vibrant social center for the needs of the 99% should be applauded. Instead, the agents of the 1%, in this case the Oakland police – already under investigation for excessive force – once again attacked. Using flash bang grenades, projectiles, batons, tear-gas, and other weapons, police arrested over 400, bringing total US Occupy-related arrests to over 6,300. As the Occupy Oakland Media Committee said:

Launch of a #ows currency design competition at Occupy Wall Street Many of Wall Street's occupiers understand that austerity comes from a shortage of money, not resources, and that the right to issue money is granted by the government to a banking cartel. Most US citizens have no understanding of what money is and how it is make artificially scarce to compel them to compete against one another in converting natural resources into "economic growth." Money need not be a destructive force which, through interest, centralises wealth and power. The occupiers of Wall street intend to issue their own 'complementary' currency to raise awareness of the role of monetary design in the currency monetary crisis. In order to ensure the new certificates will are as attractive and relevant as possible, we are launching a design competition, for the next seven days. We are thankful to the p2p foundation for hosting.

Naomi Klein: the hypocrisy behind the big business climate change battle I denied climate change for longer than I care to admit. I knew it was happening, sure. But I stayed pretty hazy on the details and only skimmed most news stories. Occupy Wall Street Occupy Wall Street (OWS) is the name given to a protest movement that began on September 17, 2011, in Zuccotti Park, located in New York City's Wall Street financial district. The Canadian, anti-consumerist, pro-environment group/magazine, Adbusters initiated the call for a protest. The ensuing series of events helped lead to media awareness that inspired Occupy protests and movements around the world.

Obama's Big Silence: The Race Question Published in The Guardian Americans began the summer still celebrating the dawn of a "post-racial" era. They are ending it under no such illusion. The summer of 2009 was all about race, beginning with Republican claims that Sonia Sotomayor, Barack Obama's nominee to the US Supreme Court, was "racist" against whites.