We live in a world where we have to hide to make... - StumbleUpon 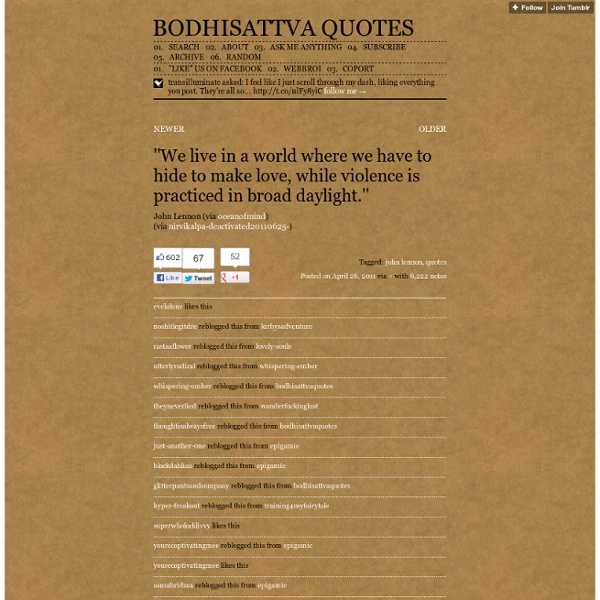 Buddhism Facts - Interesting Facts on Buddhism - Buddhism Religion Fact This write up on Buddhism facts contains information on some interesting facts on Buddhism religion facts. Buddhism is the fourth largest religion of the world. Founded by Gautam Buddha, it is a path of spiritual development that helps a person in finding the true nature of life. Buddhism emphasizes on experiencing, rather than teaching or learning. It considers meditation as the means to enlightenment and is based on a number of principles. The followers of Buddhism do not worship any God and follow the noble eightfold path to lead a meaningful existence.

Sacred Centers - The Chakras Portal - Pathways for Personal and Global Transformation - Chakras, Videos, Workshops and Books by Anodea Judith. The Chakra System originated within the yoga traditions of India, most specifically the Tantric period, circa 500 – 1000 AD. Therefore, yoga is an ideally designed practice to not only train your mind and body, but to access your chakras. The word yoga means yoke or union, and one can see how the chakra system represents the structural aspect of that yoke — the means through which mind and body, mortal and divine, connect.

Five Tibetan Rites The Eye of Revelation by Peter Kelder The Five Tibetan Rites is a system of exercises reported to be more than 2,500 years old[1] which were first publicized by Peter Kelder in a 1939 publication titled The Eye of Revelation.[2] The Rites are said to be a form of Tibetan yoga similar to the yoga series that originated in India. However, the Five Rites and traditional Tibetan yoga both emphasize "a continuous sequence of movement" (Sanskrit: vinyasa), whereas Indian forms focus on "static positions". Although the Rites have circulated amongst yogis for decades, skeptics say that Tibetans have never recognized them as being authentic Tibetan practices. The Five Tibetan Rites are also referred to as "The Five Rites", "The Five Tibetans" and "The Five Rites of Rejuvenation".

Buddhism and the Brain & SEEDMAGAZINE.COM - StumbleUpon Credit: Flickr user eschipul Over the last few decades many Buddhists and quite a few neuroscientists have examined Buddhism and neuroscience, with both groups reporting overlap. I’m sorry to say I have been privately dismissive. One hears this sort of thing all the time, from any religion, and I was sure in this case it would break down upon closer scrutiny. Chakras Chakras Chakra means Wheel in Sanskrit. Consciousness and energy move from one frequency to another in spiraling fashion.

Sound and the Chakras” - healingsounds.com Sound and the ChakrasBy Jonathan Goldman In 1980 I first began my study of the uses of sound and music as therapeutic and healing modalities. This study ultimately manifested with a Master’s Degree in Independent Study of the Uses of Sound and Music for Healing from Lesley University in Cambridge, Massachusetts. My initial investigation into the area of sound healing was the relationship between sound and the chakras. Chakra From an 1899 Yoga manuscript in the Braj Bhasa language. Their name derives from the Sanskrit word for "wheel" or "turning", but in the yogic context a better translation of the word is 'vortex or whirlpool'.[1][note 1] The concept of chakra features in tantric and yogic traditions of Hinduism and Buddhism. Etymology[edit] Sanskrit chakra derives from the Proto-Indo-European *kʷekʷlos; its cognates include Greek kuklos, Lithuanian kaklas, Tocharian B kokale, and English "wheel," as well as "circle" and "cycle".[2]

Pineal Gland Detox: Enhance Spiritual, Mental and Physical Well-Being A tiny gland in the center of the brain named the pineal may seem insignificant, but researchers have found it to be vital for physical, mental and, many believe, spiritual health. Through poor diet, exposure to toxins, stress and modern lifestyle choices, the pineal gland becomes hardened, calcified and shuts down. To awaken this gland from its slumber, detoxification is necessary using diet and herbs, sunlight and pure water. An important pea-sized gland Pinecone shaped, the size of a pea and resting in the center of the brain, the pineal gland is small but powerful.

Psychedelics Can Expand Your Consciousness It might seem as though we are all separate, and individual from one another and our environment. While that may appear true and could very well be true in some ways, we are also all connected at the deepest levels of existence. When understanding this, we can look at how we operate daily and begin to ask questions: Why are we so concerned with dominating one another? Why do we strive to be better than others? Why do we chase pieces of paper so that we can have more and more things? Why do we judge one another?