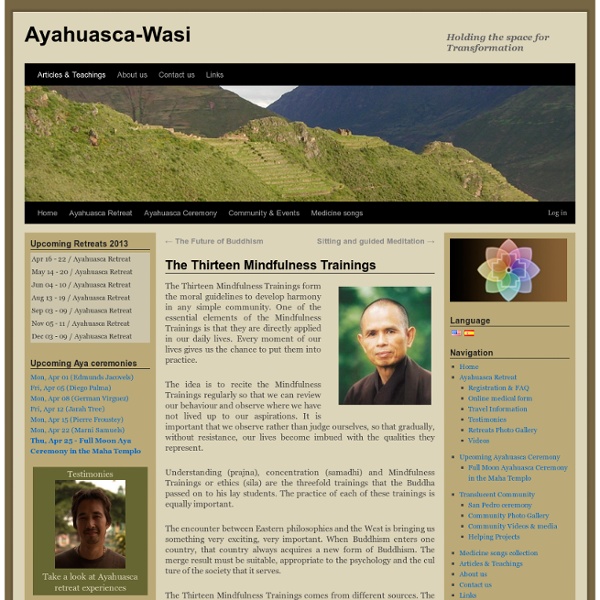 The Thirteen Mindfulness Trainings form the moral guidelines to develop harmony in any simple community. One of the essential elements of the Mindfulness Trainings is that they are directly applied in our daily lives. Every moment of our lives gives us the chance to put them into practice. The idea is to recite the Mindfulness Trainings regularly so that we can review our behaviour and observe where we have not lived up to our aspirations. It is important that we observe rather than judge ourselves, so that gradually, without resistance, our lives become imbued with the qualities they represent. Understanding (prajna), concentration (samadhi) and Mindfulness Trainings or ethics (sila) are the threefold trainings that the Buddha passed on to his lay students. The encounter between Eastern philosophies and the West is bringing us something very exciting, very important. The Thirteen Mindfulness Trainings comes from different sources. Tiep and Hien are Vietnamese words of Chinese origin. Related:  Buddhism and Buddhist schools

Wildmind Buddhist Meditation - Learn Meditation Online Buddha's World & Buddhism Hi Stumblers! Please see my spiritual newsletter My focus is not on rituals, symbolism or gods, but on the path that Buddhism points to and its vision on the nature of our every day "reality". Texts on the nature of the Buddhist path, texts on the nature of reality (see emptiness), karma, and texts on meditation. As the title suggests different Buddhist lineages are represented here. Amongst them Tibetan Buddhism and Zen. Of living teachers of Buddhism, material by Thich Nhat Hanh,the Dalai Lama has been included here, among many others. Katinka Hesselink

Cave Temples In 386 the Northern Wei dynasty was declared by the Tuoba, a nomadic people from the north. As it consolidated power in north China during the fifth century, this non-Han dynasty found it beneficial to associate themselves with the burgeoning popularity of Buddhism. Despite this, the Northern Wei emperor Taiwu (r. 424-452) was persuaded by Daoist and Confucian officials at court to curb the Buddhist church. This persecution of Buddhism, begun in 446, lasted until his death in 452. Taiwu's grandson, Wencheng (r. 452-465) succeeded him and reinstated Buddhism to its previous, eminent position. Today, over 50,000 statues from the 52 caves survive. The front walls of many of the caves have eroded away, so that some of the larger statues can now be viewed from a distance, as seen below.

Anger "It is natural for the immature to harm others. Getting angry with them is like resenting a fire for burning." Shantideva Once upon a time there was a little boy with a bad temper. His father gave him a bag of nails and told him that every time he lost his temper, he should hammer a nail in the fence. The first day the boy had driven 37 nails into the fence. The definition of Aversion is: Exaggerated wanting to be separated from someone or something. The basic problem according to Buddhism, is that emotions like anger and hatred are based on projections and exaggeration, not on objectivity or wisdom, and thus basically incorrect. As His Holiness the Dalai Lama mentioned: "When reason ends, then anger begins. Is anger or hatred ever justified? "'Righteous hatred' is in the same category as 'righteous cancer'or 'righteous tuberculosis'. And as Khenpo Konchog Gyaltsen Rinpoche mentioned: "Some people feel patience is showing weakness or pessimism. ^Top of Page What forgiveness is

Buddhism and the Brain Credit: Flickr user eschipul Over the last few decades many Buddhists and quite a few neuroscientists have examined Buddhism and neuroscience, with both groups reporting overlap. I’m sorry to say I have been privately dismissive. One hears this sort of thing all the time, from any religion, and I was sure in this case it would break down upon closer scrutiny. When a scientific discovery seems to support any religious teaching, you can expect members of that religion to become strict empiricists, telling themselves and the world that their belief is grounded in reality. But science isn’t supposed to care about preconceived notions. Despite my doubts, neurology and neuroscience do not appear to profoundly contradict Buddhist thought. Buddhists say pretty much the same thing. When considering a Buddhist contemplating his soul, one is immediately struck by a disconnect between religious teaching and perception. Mr. The next day Mr. Consider how easily Buddhism accepts what happened to Mr.

The Five Buddha Families. The Buddha families as presented by Chogyam Trungpa Rinpoche are a description of five qualities of energy. They describe qualities we all have. They are not meant to solidify one’s ego through identifying them the way some people identify with their astrological signs. They are instead a fluid working basis for recognizing our current sanity or neurosis. Practitioners of the buddhadharma are not expected to be uniformly cool or warm, smart or spacious. Each Buddha family has an emotion associated with it, which can be transmuted into wisdom, as well as a color, element, landscape, direction, season, and even a time of day. The central Buddha family is Buddha, which has the quality of space and accommodation. But the neurosis of the Buddha family is dullness, a kind of bubble-gum or molasses mind. This is the wisdom, which makes it possible for the other Buddha families to function. The Vajra family is known for precision and intellectual exactness. There is no fixed type-casting. Bonus:

Bodhisattva Quotes | We live in a world where we have to hide to make... Bodhisattva Quotes "At night I dream that you and I are two plants that grew together, roots entwined and that you know..." follow me → Newer Older <div id="about_container" style="display:block;border-top: 1px #000000 dashed;"><a name="me"></a><p class="avatar"><img alt="Bodhisattva Quotes"src=" /></p><p><script type="text/javascript"> var gaJsHost = (("https:" == document.location.protocol) ? Field Notes Theme.

eBooks: Welcome Welcome to Buddhanet eBook!s! Here you will find our extensive collection of eBooks that were created by the Buddha Dharma Education Association Inc. for BuddhaNet.Net. The collection covers a large range of topics, from childrens books to art and history, spanning Mayahayana, Theravada and other Buddhist traditions. You will find more eBooks archived in the BuddhaNet File Library. Our eBooks are FREE. All eBooks contained here are © Copyright 'Buddha Dharma Education Association/Buddhanet.net' All rights reserved unless otherwised indicated. DAILY INSPIRATION on Spiritual Growth