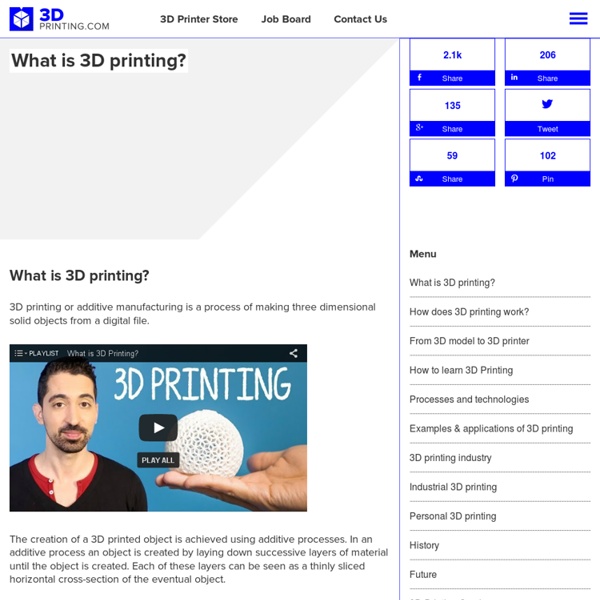 Related:  Unit 7 Unlock 3 • How 3D Printing is being used in Schools • reshmah • lesjoy

3D Printing You are in: Future Technologies : 3D Printing 3D Printing Imagine a future in which a device connected to a computer can print a solid object. A future in which we can have tangible goods as well as intangible services delivered to our desktops or highstreet shops over the Internet. And a future in which the everyday "atomization" of virtual objects into hard reality has turned the mass pre-production and stock-holding of a wide range of goods and spare parts into no more than an historical legacy. Such a future may sound like it is being plucked from the worlds of Star Trek.

What Can 3D Printing Do? Here Are 6 Creative Examples Airwolf 3D printer / Image: Wikipedia 3D printing has been used to create car parts, smartphone cases, fashion accessories, medical equipment and artificial organs. Charles “Chuck” Hull created the first functional 3D printer in 1984 and the technology has come a long way ever since then. Manufacturing corporations and aerospace organizations have saved billions of dollars by using 3D printing for building parts. 3D printing has also helped save lives. One of the best ways to learn about what 3D printing can do is by researching real-life applications on the technology.

Teaching Art to Teens in Public Libraries, Teaching Artist Journal, 2013 One of the hottest terms among public librarians today is "content creation," which involves stuff that library patrons make instead of simply use in a library context. Videos, music, fiction, paintings, 3D printed materials, websites--all these are made in public libraries, and will increase in popularity as more libraries shift from purveyors of content to facilitators of creation. Libraries are becoming "incubators" of art, ideas, economic benefits, and community benefits. A library seething with creative energy can shock some traditionalists, who still see the library as a quiet place to read a book. Yet the mission of many public libraries is not only to inform via printed or multimedia materials but also to connect ideas and people, to build communities, and to offer transformative experiences to all by bridging opportunity divides. In light of the "library=transformation" model, art programs are a natural fit.

What is laptop computer? - Definition from WhatIs.com A laptop computer, sometimes called a notebook computer by manufacturers, is a battery- or AC-powered personal computer generally smaller than a briefcase that can easily be transported and conveniently used in temporary spaces such as on airplanes, in libraries, temporary offices, and at meetings. A laptop typically weighs less than 5 pounds and is 3 inches or less in thickness. Among the best-known makers of laptop computers are IBM, Apple, Compaq, Dell, and Toshiba. By submitting your email address, you agree to receive emails regarding relevant topic offers from TechTarget and its partners. You can withdraw your consent at any time. Robotics - Gizmag In both an impressive display of innovative technology and a glimpse of a future in which humans could be redundant, Volvo has shown off its Robot-based Autonomous Refuse handling (ROAR) project. The system uses drones to locate refuse bins and robots to collect and empty them. Read More Two marine scientists have shown that autonomous underwater vehicles (AUVs) can be programmed to make independent decisions and trigger new missions in real time based on data coming from multiple sensors. They believe this could reveal much about the life of squid and other marine creatures. Read More

11 Amazing Ways People Are Using 3D Printers For Good, Not Guns Even though anyone willing to shell out $850,000 on a 3D metal printer can now produce fully functioning guns in the legal comfort of their own home, it's not time to cry foul on the emerging technology. A lot of other people are creating some amazingly innovative and non-lethal things that won't leave you wondering which 3D-printed guns can and can't be detected by metal detectors. Engineers, for example, have long enjoyed using 3D printers to pop out quick prototypes made of thin plastic filament, layered on top of itself to create solid objects. Over the years, the machines have become more advanced, now capable of providing us with other, more widely useful applications, from car parts to body parts.

MSU Libraries Location and Hours Location: Main Library Copy Center, located on the 2nd floor of the West Wing. Hours of operation for 3D Printing are in accordance with the Copy Center. Your Laptop in 2018: The Future of Computing Think back to the laptop you had in 2008. It probably doesn't look too different from what you're using today. Sure, your current notebook is lighter than the brick you lugged around five years ago, and it's running Mountain Lion or Windows 8 rather than Vista or Leopard, but it's still a clamshell laptop with the same basic functionality. Fast-forward to 2018, and your computing experience will be radically different — but familiar, too. Humanoid Robot Starts Work at Japanese Department Store Dressed in a kimono and smiling, Aiko Chihira greets shoppers at the entrance of Tokyo's Mitsukoshi department store. But Chihira is no regular employee -- she is a humanoid robot. Developed by Toshiba last year, the robot made its debut at the store on Monday in a new role interacting with customers. Speaking Japanese, Chihira, which has human-like features and blinks, can also be programmed to speak in other languages such as Chinese.

5 Potential Future Applications of 3D Printing Within the Aerospace Industry Like many industries, the aerospace industry is increasingly adopting 3D printing and rapid prototyping technologies to develop aircraft parts in the pursuit of trimming down manufacturing costs. As a matter of fact, one of the major players in the aerospace domain, Boeing, already makes use of 3D printing technology extensively and printed over 22,000 parts last year. Boeing 787 Dreamliner The Boeing 787 Dreamliner apparently has 30 printed parts, which in itself is an industry record. Moreover, General Electric (GE) recently announced an investment of $50 million to 3D print fuel nozzles for the next-generation LEAP jet engine. The sudden inclination of aerospace industry towards additive manufacturing is mainly due to the possibility to achieve significant weight reduction.

ALIA Information Online 2015 Conference wrap Tuesday 3 February It was a great day at ALIA Information Online 2015 - some fantastic learning opportunities, great fun networking and some mind-expanding presentations. The day started with a breakfast workshop on 3D printing by Dale Nicholls which encouraged libraries to create maker spaces so groups could learn new skills. One of the most interesting developments is libraries buying 3D printers and teaching groups in the community how to use the tool to produce many different things. Some examples of toys made by the printer were displayed. ALIA President Damian Lodge opened the conference, noting that the theme was ‘at the edge’. ‘With information at our fingertips, we are seeing amazing changes and innovations taking place with incredible speed.

Volunteers in libraries: an alternative to closures, or a risk to the professionals? Manchester Central Library. (Photograph: James Carson) By James Carson Anyone doubting the capacity of libraries to stir up strong feelings need look no further than the debate concerning volunteers in public libraries. In 2011, when the leader of Oxfordshire County Council called for increases in the use of volunteers in public libraries, the author Philip Pullman was quick to respond:

How current robotics advancements can have real-world applications The field of robotics is heating up with ever-growing innovations for healthcare. Forecasts from the UK's Visiongain suggest the overall world market for robotics in healthcare will surpass $3 billion this year and continue expanding to 2025. "Surgical robots are currently the most dynamic submarket within the overall robotics in healthcare market," the company states. "Medical robots that exhibit both clinical and economical benefits over existing healthcare solutions are in great demand." In the United States, Johnson & Johnson and Google have announced a strategic collaboration specifically to advance surgical robotics through new technologies designed to improve accuracy, cost efficiency and outcomes. The deal involves Ethicon, a medical device company under Johnson & Johnson, and Google's Life Sciences team.