The Conversation: In-depth analysis, research, news and ideas from leading academics and researchers. 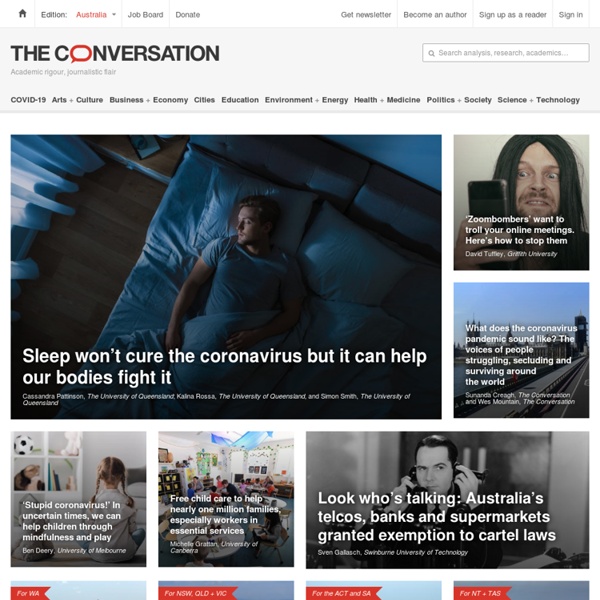 Mike Baird has been elected unopposed as the new NSW Liberal Party leader, and will soon become the state’s 44th premier after the shock resignation of Barry O'Farrell yesterday. But what are the prospects… In a world of iPhones and drones, people are right to wonder why they are still working so hard. The past century saw huge technological advances and yet there hasn’t been a corresponding increase in leisure… Considering India’s aspirations to be a global power, foreign policy has played but a minor role in the current election campaign. The manifestos of the major parties also say little on the subject, so…

A Film Blog: Book Review: The Reason Why (1953, Cecil Woodham-Smith) Note: An early version of this article originally appeared on Amazon.com. My reason for posting this here will become apparent, if a) you noted my recent hints about researching a larger, in-depth article; b) you know the book's connection with a certain movie. Cecil Woodham-Smith (1896-1977) was born of an Irish family in Wales. Marrying a London solicitor, Woodham-Smith busied herself raising children and writing potboiler novels, before becoming an historian. After finishing an acclaimed biography of Florence Nightingale (1950), she remained fascinated with the Crimean War, especially the Charge of the Light Brigade.

Science and technology research news « Prev | 1 | 2 | 3 | 4 | 5 | 6 | 7 | 8 | 9 | 10 | Next » Detecting corrosion and fatigue during service A new project, CORFAT (Cost effective corrosion and fatigue monitoring for transport products SCP7-GA-2008-218637), looks to develop new monitoring technology based on acoustic emission testing (AT) combined with follow-up NDT (non-destructive testing) to detect defects such as corrosion or cracks in the structure of surface transport products (ships, railway tank cars, road tankers). Projects talks to Andreas Jagenbrein about predictive maintenance and what this means for transport safety.

Google honours Hedy Lamarr, inventor of technology behind Wi-Fi and Bluetooth Hedy Lamarr: from actress to inventor Google pays tribute to Hollywood actress-turned-inventor Hedy Lamarr on the 101st anniversary of her birth. Renaissance woman Hedy Lamarr could not be accused of living a dull life. Start Here New to Keeper of the Home? Welcome! We’re so glad you’re here! I know it can be challenging to find your way around a new website. Allow me to show you around a little! Spotlight — RT Programs 1967 - Born in Dushanbe, Tajikistan, USSR 1987 - Applies to Moscow Military Institute 1991 - Military translator 1993 - Founder, Transavia travel agency 1995 - Establishes trans aviation network group, Oostende, Belgium 1995 - Founder, Air Cess,... 31.08.2007 20:00 Spotlight is a 26 minute, in-depth, daily interview programme which focuses on current events in Russia and across the world. Respected Russian journalist Aleksandr Gurnov speaks to people from a broad spectrum of professional backgrounds, including politics, academia, arts, and science. Some 40,000 English football fans have arrived in Russia to watch the Champions League final between Manchester ... Head of the Russian Islamic Committee Geidar Jemal and Financial Analyst Sergey Aleksashenko “Dear ...

Questions Learners Should Be Addressing Every Day at School I believe it is every educator’s responsibility to help insure that learners are addressing the following questions during each school day: What questions am I asking today?What answers am I seeking today?What am I exploring today?What am I making today? Accelerating Future There isn’t enough in the world. Not enough wealth to go around, not enough space in cities, not enough medicine, not enough intelligence or wisdom. Not enough genuine fun or excitement. Not enough knowledge. of Halloween - Halloween Halloween is a holiday celebrated each year on October 31, and Halloween 2020 will occur on Saturday, October 31. The tradition originated with the ancient Celtic festival of Samhain, when people would light bonfires and wear costumes to ward off ghosts. In the eighth century, Pope Gregory III designated November 1 as a time to honor all saints. Soon, All Saints Day incorporated some of the traditions of Samhain. The evening before was known as All Hallows Eve, and later Halloween.

Haunted History of Halloween Video - History of Halloween You're almost done! You will soon receive an activation email. Once you click on the link, you will be added to our list. If you do not receive this email, please contact us. To ensure delivery to your inbox, add us to your address book. Oops, there's a problem.