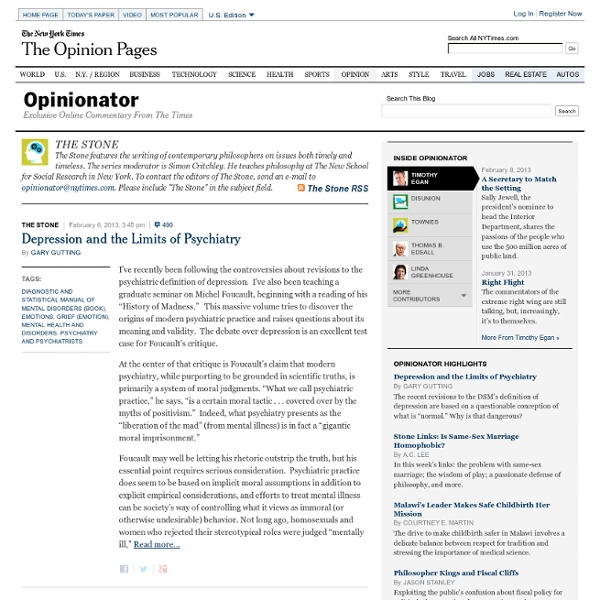 This is the second in a series of interviews about religion that I am conducting for The Stone. The interviewee for this installment is Louise Antony, a professor of philosophy at the University of Massachusetts at Amherst and the editor of the essay collection “Philosophers Without Gods: Meditations on Atheism and the Secular Life.” Gary Gutting: You’ve taken a strong stand as an atheist, so you obviously don’t think there are any good reasons to believe in God. But I imagine there are philosophers whose rational abilities you respect who are theists. Louise Antony: I’m not sure what you mean by saying that I’ve taken a “strong stand as an atheist.” G.G.: That is what I mean. L.A.: O.K. I say ‘there is no God’ with the same confidence I say ‘there are no ghosts’ or ‘there is no magic.’ That’s not to say that I think everything is within the scope of human knowledge. G.G.: Yes, I do think it’s relevant to ask believers why they prefer their particular brand of theism to other brands.

Philosophy Pages Philosophy TV Ockham’s Beard Third Person: Politics of Life and Philosophy of the Impersonal Roberto Esposito puts forth a radical and provocative thesis: the triumph of the category of "the person" that, since the end of World War II has accompanied the discourse on human rights, is not the source of its success, but rather of its failure. The notion of the person, which has, since the days of Roman law and even more pointedly in its Christian elaboration, indicated the transcendent value of a human being, is incapable of bridging the gap between humanity and the logic of citizenship, precisely because it is what creates such a gap. By opposing the person, as something artificial and endowed with moral and political significance, to mere humanity in its naturalness, Roman law gave rise to the "dispositif" of the person (p. 9), that is, to a notion that has, throughout its various Western morphologies, always been able to produce very real and tangible effects. How is this possible despite the triumph of the notion of the person?

Julian Baggini — I still love Kierkegaard I fell for Søren Kierkegaard as a teenager, and he has accompanied me on my intellectual travels ever since, not so much side by side as always a few steps ahead or lurking out of sight just behind me. Perhaps that’s because he does not mix well with the other companions I’ve kept. I studied in the Anglo-American analytic tradition of philosophy, where the literary flourishes and wilful paradoxes of continental existentialists are viewed with anything from suspicion to outright disdain. In Paris, Roland Barthes might have proclaimed the death of the author, but in London the philosopher had been lifeless for years, as anonymous as possible so that the arguments could speak for themselves. Discovering that your childhood idols are now virtually ancient is usually a disturbing reminder of your own mortality. It’s easy enough to see why I fell in love with Kierkegaard. Kierkegaard was not so much an oasis in this desert as a dramatic, torrential thunderstorm at the heart of it.