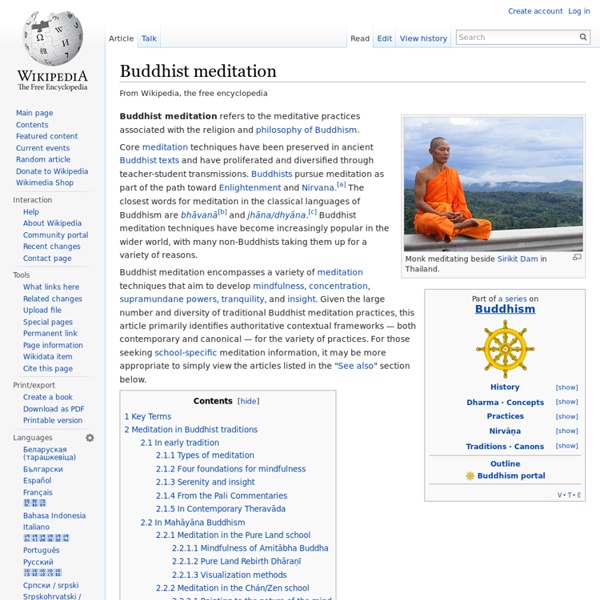 Buddhist meditation refers to the meditative practices associated with the religion and philosophy of Buddhism. Core meditation techniques have been preserved in ancient Buddhist texts and have proliferated and diversified through teacher-student transmissions. Buddhists pursue meditation as part of the path toward Enlightenment and Nirvana. Key Terms[edit] Meditation in Buddhist traditions[edit] While there are some similar meditative practices — such as breath meditation and various recollections (anussati) — that are used across Buddhist schools, there is also significant diversity. In early tradition[edit] Types of meditation[edit] Meditation on the Buddhist Path Most Buddhist traditions recognize that the path to Enlightenment entails three types of training: virtue (sīla); meditation (samadhi); and, wisdom (paññā). And implicitly in regard to : Right View (samma ditthi) – embodying wisdom traditionally attained through the meditative development of vipassana founded on samatha. [edit]

Buddha's World & Buddhism Hi Stumblers! Please see my spiritual newsletter My focus is not on rituals, symbolism or gods, but on the path that Buddhism points to and its vision on the nature of our every day "reality". Texts on the nature of the Buddhist path, texts on the nature of reality (see emptiness), karma, and texts on meditation. As the title suggests different Buddhist lineages are represented here. Amongst them Tibetan Buddhism and Zen. Of living teachers of Buddhism, material by Thich Nhat Hanh,the Dalai Lama has been included here, among many others. Katinka Hesselink

Bodhisattva Quotes | We live in a world where we have to hide to make... Bodhisattva Quotes "At night I dream that you and I are two plants that grew together, roots entwined and that you know..." follow me → Newer Older <div id="about_container" style="display:block;border-top: 1px #000000 dashed;"><a name="me"></a><p class="avatar"><img alt="Bodhisattva Quotes"src=" /></p><p><script type="text/javascript"> var gaJsHost = (("https:" == document.location.protocol) ? Field Notes Theme.

Buddhism in the West Buddhism in the West broadly encompasses the knowledge and practice of Buddhism outside of Asia. Occasional intersections between Western civilization and the Buddhist world have been occurring for thousands of years. With the rise of European colonization of Buddhist countries in Asia during the 19th century detailed knowledge of Buddhism became available to large numbers of people in the West, as a result of accompanying scholarly endeavours. Hellenistic world[edit] Ancient history[edit] The Western and Buddhist worlds have occasionally intersected since the distant past. The Mauryan Emperor Aśoka (273–232 BCE) converted to Buddhism after his bloody conquest of the territory of Kalinga (modern Orissa) in eastern India during the Kalinga War. Perhaps the finest example of these is the Great Stupa of Sanchi in India. The Maurya Empire under Emperor Aśoka was the world's first major Buddhist state. This period marks the first spread of Buddhism beyond India to other countries. 1950s[edit]

Brahma Viharas The four sublime mental states are qualities of mind that we cultivate in order to alleviate the suffering we experience in everyday life and to feel more connected to others—and the worries and fears we all share. In the language of the Buddha (Pali), they are called the brahma viharas , which means "the dwelling place of awakened beings." The good news for us unawakened beings is that it's easy to begin cultivating the brahma viharas . Indeed, they are an integral part of other religious, spiritual, and humanistic traditions. Metta . I like to think of metta as the simple act of well-wishing. Sylvia once said that she practices metta by just looking at a person and silently saying, "I love you." Karuna . The Vietnamese Zen master, Thich Nhat Hanh, helped me learn to cultivate compassion for myself. Mudita . Just as metta is an antidote for our judgmental tendencies, mudita is the perfect antidote for envy. Upekkha .

free buddhist audio : free mp3s and texts on buddhism, meditation and the arts Buddhism Develop the mind of equilibrium. You will always be getting praise and blame, but do not let either affect the poise of the mind: follow the calmness, the absence of pride. Buddhism is a religion and philosophy, said to have been founded by Gautama Buddha. The vast majority of Buddhists live in Asia. Quotes[edit] Renunciation is not getting rid of the things of this world, but accepting that they pass away.Aitken Roshi, as quoted in The Awakening of Global Consciousness: A Guide to Self-Realization (2010) by Jawara D.

Buddhism Vaults : Dalai Lama's Heart Sutra Talk, May 2001, SF Bay Area, California, Day 1 of 3. by Dave Evans Day 2Day 3 Introduction Today I was fortunate enough to sneak out of work for a few hours to hear His Holiness the Dalai Lama began a lecture on the Heart Sutra. This is a three day class and I'm going to sneak out of some work tomorrow and Attend Saturday during the day as well. Please forgive my spelling, my crutch... er, spell checker is not working currently. Tickets for the three day class were $150. His Holiness started this morning talking about the diversity of religions and then even the diversity of views within buddhism. I want to point out that these are just my notes of H.H.' I missed some of the afternoon session, couldn't sneak out of work for the whole thing, but I'll summarize as much detail as I have. The shoreline stage was decorated with a large backdrop picture of the palace in Lhasa, with a small decorated throne like chair in front for the fourteenth Dalai Lama to sit on. He started his lecture in English. Each religion has a unique perspective and strengths.