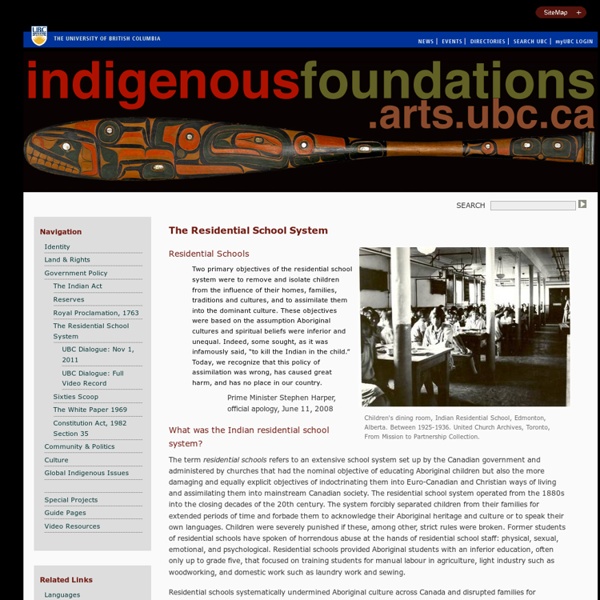 "Mohawk Institute": Six Nations Public Library-Digital Archive "Sides differ over preservation of residential school": Six Nations Public Library-Digital Archive Sides differ over preservation of residential school MARIEVAL, Sask. (CP) - The symbolic significance of the last of Saskatchewan's original residential schools has sparked a feud between the former and current chiefs of the Cowessess First Nation. Former chief Terry Lavallee wants the Marieval school, built in 1897, preserved as a museum and a reminder of the physical and sexual abuse aboriginal students suffered at the church-run facilities. Current chief Terrence Pelletier says the building is a black mark on aboriginal history and should be torn down so a new $8-million school can be built on the site. Demolition has already begun on the east wall of the school, and the rest is scheduled to be brought down in the coming month. Lavallee said he will seek a court injunction to stop the demolition. "(The history) is no reason to save it, and it is no reason to demolish it," said Pelletier. "The Department of Indian Affairs wants to wipe the slate clean," countered Lavallee.

"Residential school abuse survivors seek $1 billion in damages": Six Nations Public Library-Digital Archive Residential school abuse survivors seek $1 billion in damages NORTH VANCOUVER - Survivors of abuse at native residential schools in British Columbia are seeking an estimated $1 billion in damages. The money would come from civil lawsuits tiled on behalf of an estimated 2,000 survivors of residential schools and their families. The lawsuits would be part of an international strategy that views British Columbia as the most favorable climate for large ­scale class-action lawsuits, the First Nations Summit was told at a meeting Wednesday. The summit represents most on-reserve chiefs of B.C.' Each survivor could get up to $500,000, said a legal opinion by Vancouver lawyer Karim Ramji. No class-action suit based on residential school abuse has been filed in British Columbia. But 49 individual lawsuits have been filed stemming from abuse at the schools, run in the provinces from 1858 to 1984 by churches under contract to the federal government. It is being spearheaded by Phil Lane, a U.S.

"Harper won't commit to TRC recommendations": Six Nations Public Library-Digital Archive "Truth and Reconciliation Commission releases final report": Six Nations Public Library-Digital Archive “Reframing” Native Narratives: The Allure of Project 562 You’ve probably heard about Matika Wilbur by now (and if you haven’t, now is a good time to fix that!) Matika Wilbur’s story is that of a young woman with places to go and people to photograph – the 28-year-old Swinomish/Tulalip photographer from the Swinomish Reservation in Washington has started an ambitious project to photograph and collect oral histories from all 562 federally-recognized Indigenous tribes in the United States. With stories on Upworthy, ICTMN, the New York Times, NBC News, Huffington Post, and more, Wilbur’s story has gone viral – and at last count she has more than quadrupled her crowd-sourced Kickstarter fundraising campaign, which covers project expenses such as photographic equipment, travel fees, and more. Why is this creating such a buzz? Why does everyone love Wilbur? Perhaps it’s because this project, as far as we know, has never before been undertaken by a Native American. In 1906, photographer and ethnologist Edward S.

Canada must not ignore Indigenous 'genocide', landmark report warns Canadians can no longer turn a blind eye to the “genocide” of Indigenous peoples in the country, a landmark report on missing and murdered women has concluded. Indigenous communities across the country have for decades attempted to convey the depth and scope of a tragedy that has haunted thousands of families. As many as 4,000 Indigenous women and girls are believed to have been killed or gone missing in Canada over the past 30 years – although the true number of victims is unlikely ever to be known. On Monday the findings of a three-year inquiry were released at a solemn ceremony in Quebec, attended by victims’ families, survivors, Indigenous leaders and senior government officials. “This is an uncomfortable day for Canada,” said the prime minister, Justin Trudeau. The inquiry’s final report, a 1,200-page catalogue of historical and contemporary injustices, concludes that decades of policy and state indifference amounted to genocide against Indigenous peoples. “It’s powerful.

Canada’s genocide of Indigenous peoples: Time for decolonisation - JusticeInfo.net The National Inquiry into Missing and Murdered Indigenous Women and Girls found that an ongoing genocide of Indigenous peoples constitutes a root cause of the violence that is currently being perpetrated against Indigenous women and girls. Genocide is a centerpiece of the National Inquiry’s report, which argues that colonial violence is ongoing, not just a legacy of the past. Its 231 Calls for Justice reflect the legal obligation to stop genocide through a range of policy and process changes. Indigenous women are at least six times more likely to be the victims of a homicide than non-Indigenous women. Numbers are difficult to ascertain, as they keep growing, but nearly two decades of studies and reports in Canada have uncovered more than 1,200 names of Indigenous women who are known to have been killed or who have simply disappeared. Canadians have been, collectively, given a history of themselves that is not accurate. What is colonial genocide? Colonial genocide is a slow-moving process.

Canada's treatment of Indigenous peoples fits the definition of 'genocide' | Canadian Lawyer Raphael Lemkin, who coined the word "genocide" in 1943, defined the term as the destruction of a nation or of an ethnic group through the “disintegration of the political and social institutions, of culture, language, national feelings, religion and the economic existence of national groups, and the destruction of the personal security, liberty, health, dignity and even the lives of the individuals belonging to such groups.” Genocide is defined in the Genocide Convention as any of the following acts committed with intent to destroy, in whole or in part, a national, ethnical, racial or religious group, as such: (a) Killing members of the group; (b) Causing serious bodily or mental harm to members of the group; (c) Deliberately inflicting on the group conditions of life calculated to bring about its physical destruction in whole or in part; (d) Imposing measures intended to prevent births within the group; (e) Forcibly transferring children of the group to another group.

In this website we can read about how strict the rules in the residential schools were... if some students did not convert to a more (canadien) way of life and religion and etc... they would use violence to do so. The impact of those schools marked these peoples for life. They had to convert to something they were not and thats how many of them lost their idenety even after getting out of those schools because they did not know what to belive in anymore. by stuartghita Oct 26

This webpage goes into detail about what Residential Schools were created for, what students went through at the schools and the permanent effects they had on the children who attended them. It also has extracts from the apologies given by the Canadian government to the victims of the Residential Schools system. by hazbounwasher Oct 25

In this website, we can see that the residential schools' survivors are people that have been abused from an early age physically, emotionally, sexually and mentally. Unfortunately, the circle of abuse never stops as it repeats itself with the same behavior once the survivors have children. Obviously this is affecting the family circle and stimulates more dysfunction with close ones. We think people should never be in such conditions since they take them as a lifestyle that is unacceptable. by leclairlemay Oct 25

Residential schools are schools that Indian children were forced to go to in order to become more European. This website is a great source of information because it explains why residential schools were created, what life was like in the schools and the effect they had on the students afterwards. by scarpaleggiamaiorino Oct 24

In this link ,under the subtile " Living conditions at the residential schools" , it informs us on how terrible the conditions they were living in were. For instence they had the very minimum of education, girl were tought house work and boys outdoors work for example : farming. They were almost all sexualy abused and beaten. Every place in the school was dirty and the children were not taken care of most of them die of illenses cought in the school. Everyone was clutered and there was no secure places to be found. by simlaramee Oct 23

On this site under the subtile " long-term impacts ", it explains that even onece you are out of the residential school the consecenses don't just stop there. Most aboriginals that now have kids lack parenting skills and tend to do to raise there kids the way they were raised ( with abuse & violence). Generations of children have grown up without a nuturing family life ( even without beeing in a residential school it's self). by simlaramee Oct 23

This website talks about how the residential schools take part in taking away their childhood culture and replacing it with what they think is the superior culture. It also states that these tasks were taken too far because the english thought that the indians' spiritual beliefs were not good which ended up being wrong of coarse. by brownfamili Oct 21

This website is a very detailed and is abondant with information revolving around the Residential Schools. This website also explains, in depth and professionalism, the reasons behind the creation of the Residential schools, the life and atmosphere inside their schools, the long-term impacts on the aboriginal communities, and also other well documented facts to be read. This website is strongly recommended to people who would want to know more about the subject. by bolduczienkiewiczhamdy Oct 19

In this pearl, the website explains how the residential schools had a huge impact on the kids and families...the schools were very strict because they had to force the students to become more ''canadian'' but they would do it in a very violent way. by dufresnehernandez Oct 17

This website is a very complete information source because it gives the reasons for which residential schools were created as well as the impact of these institutions on the future of Aboriginal communities in a pleasant to read Q & A form. This source is one of the best we found. by wangdulong Oct 15

Residential schools where young Aboriginals were sent to go to school, although they were mistreated. They had to learn a different way of living and learn a new language for some. They were underfed and the schools were very strict. This website describes Residential schools in greater detail. by difiorelaplante Oct 8

We think that this is a excellent site to explain the life condition of the poor children who lost everything thy had and loved. by durandeaua Oct 7

The reisidential schools took away their way of life, their traditions and their hopes and dreams. They lived with fear of being beaten and mistreated. Even though they learned the basics of surviving in modern societies, it was not easy and done in a humain way. by biellowener Oct 7

I think that the residential schools took away their culture, they lived in fear, that did not help them but they still learned how to read, write and manual labor like woodworking . by dragcairn Oct 7