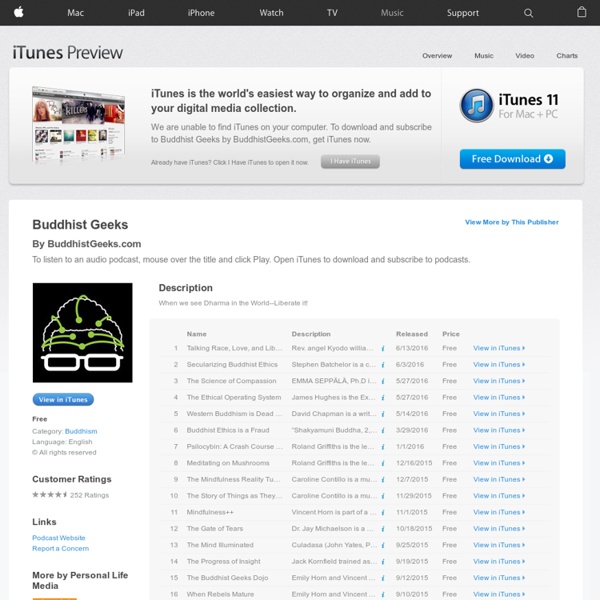 A perfect moment of peace in a busy day by JC1120 These podcasts are humble, scholarly, and sincere (I hope that "scholarly" is taken in a positive Buddhist sense!). I have immense respect for the effort here, and I've learned so much from the first five already. Thanks so much. Not the Usual Fluffy Dharma by im.sorry I have been listening to the Buddhist Geeks podcast for over a year. ...More

Sacred Texts: Buddhism Sacred-texts home Journal Articles: Buddhism OCRT: Buddhism Buy CD-ROM Buy Books about Buddhism Modern works Southern Buddhism Northern Buddhism JatakaLinks Modern works The Paintings of Michael Shapcott & The Modern Artist Michael Shapcott is an artist from central Connecticut who began drawing at an early age. iewers and purchasers of Mike’s paintings have called them powerful, inspiring, and filled with emotion. Symbols from dream imagery, folklore, and personal memories are the major inspirations and elements used in Mike’s work. His art is a unique blend of illustration and traditional portraiture created with a blend of acrylics, graphite and oil. For More info on Michael Shapcott Check Out: His Official Web Page – DeviantART Page –

printer.php from menshealth.com Muscles are funny things. They respond to just about any type of training, as long as it's hard and as long as it's not the same damn thing you've always done. That's the beauty of density training: It's a whole lot of stuff you haven't tried yet. Buddhism For Non-Believers I’ve got that quarter-life crisis swag going on. I have yet to be very productive during my post-graduation time. I watch as my friends get bonuses at their jobs, read their tweets about how difficult grad school is, and be astonished that I don’t know one but multiple peers working for Teach For America. Yes, I did get to fulfill my stereotypical wanderlust moment by traveling through SE Asia for six weeks. Yes, I did get some form of an internship for a while. And yes, I did move to New York.

Beautiful Watercolor Landscapes (12 pieces) Z.L. Feng grew up in Shanghai and began painting at the young age of seven. After experimenting with all kinds of different mediums, he finally settled on a favorite - watercolor. The artist always revered the medium because of its level of difficulty. “With watercolor you cannot cover your mistakes, so you must know what you are doing,” he says. Buddhist Inspirations & News » Are Manifestations & Mediums Of Bodhisattvas & Buddhas Around? We should respect all beings, even helpful humans, gods and ghosts. However, Buddhists only take refuge in the perfect Buddhas, Dharma and Aryasangha. An interestingly phrased question arose recently – ‘Why do mediums not get any Buddha to answer their devotees’ questions?’ Before there is further confusion, we should be clear that the use of mediums is not a Buddhist practice.

Audrey Kawasaki - Articles and Features Audrey Kawasaki’s first solo exhibit in NYC ran from December 12th through January 9th, 2010 at the Jonathan LeVine Gallery. I had the opportunity to see the Hajimari—a prelude show just in time. Kawasaki's new series included her signature style paintings on wood panels as well as works on paper. Seeing her work in person left me with a greater appreciation for her artistic craft and use of line and color. For those outside of New York who weren't able to see the show, here is a collection of photos showcasing most of Kawasaki's latest works.

Chinese Fa-hsiang School Teaching The Chinese Yogachara school was founded by Hsuan-tsang(600-664, Fig. 2), a Chinese pilgrim-translator, and his student Kwei-Ji(638-682), who systematized the teaching. Hsuan-tsang went to India and studied the doctrines derived from Dharmapala (?-507) and taught at the Vijnanavada center in Valabhi. When he returned to China (Fig.1, Great-Goose-Temple, Chan-Yan), he translated Dharmapala's Vijnapti-matratasiddhiand and many other works. His teachings mainly followed the line of Dharmapala. The most important book of the school is the Vijnaptimatrata-siddhi (Chin., Cheng-wei-shih-lun, proof of Nothing-but-Cognition) by Hsuan-tsang, a compendious work in which the teaching of the school is presented in detail.

Stan Prokopenkos Blog For a video version of this tutorial visit www.proko.com/how-to-draw-ears-anatomy-and-structure In this tutorial I will go over the parts of the ear and suggest an easy way to remember all these complex shapes. At the end, I will show a step by step of an ear drawing. Basic Forms Greco-Buddhism Greco-Buddhism, sometimes spelled Graeco-Buddhism, refers to the cultural syncretism between Hellenistic culture and Buddhism, which developed between the 4th century BCE and the 5th century CE in the Indian subcontinent, in modern day Afghanistan, India, and Pakistan. It was a cultural consequence of a long chain of interactions begun by Greek forays into India from the time of Alexander the Great, carried further by the establishment of the Indo-Greek Kingdom and extended during the flourishing of the Hellenized Kushan Empire. Greco-Buddhism influenced the artistic, and perhaps the spiritual development of Buddhism, particularly Mahayana Buddhism.[1] Buddhism was then adopted in Central and Northeastern Asia from the 1st century CE, ultimately spreading to China, Korea, Japan, Philippines, Siberia, and Vietnam. Historical outline[edit]

9 Very Common Figure Drawing Mistakes, And How to Avoid Them Over the last twenty-five years I have spent my fair share of time drawing and studying the human figure. As a result, I’ve come across several (actually, nine) common figure-drawing mistakes over and over again. Like any other art process, figure drawing is a fluid activity and impossible to pin down with exact rules—but if your goal is to create a more convincing life drawing, then these next few ideas will certainly help. Here are the nine common figure-drawing mistakes, along with their solutions: Mistake #1 – Drawing without a goal in sight More often than not, people immediately begin sketching without establishing some kind of intention in their mind first.

Was the Buddha an Atheist? "The Buddha was an atheist." Writer Allan Badiner made this bald pronouncement in the midst of a conversation that spanned the wee hours of a cloudless Burning Man night. Sitting in a vast tent where, during the day, scores of partygoers had washed off their dust and grime in a plexiglass chamber, we discussed prevailing notions of a Buddhist godhead and, conversely, our mutual embrace of the religion in its secular form. I was most intrigued, though, by Badiner’s description of the Buddha as an atheist.