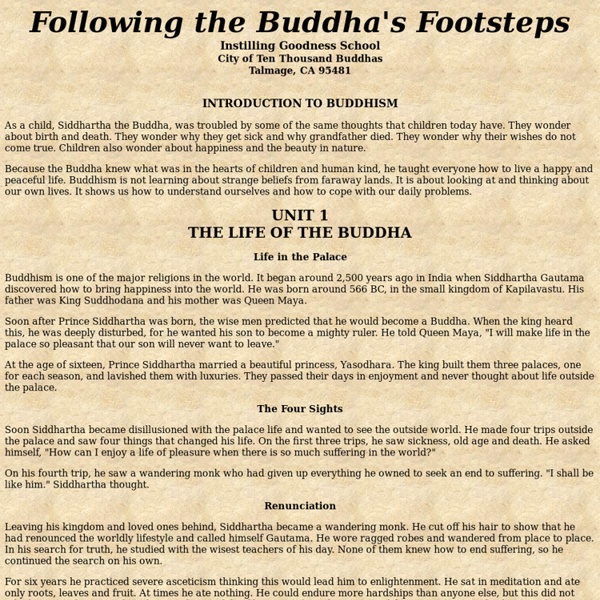 Following the Buddha's FootstepsInstilling Goodness SchoolCity of Ten Thousand BuddhasTalmage, CA 95481 As a child, Siddhartha the Buddha, was troubled by some of the same thoughts that children today have. They wonder about birth and death. Because the Buddha knew what was in the hearts of children and human kind, he taught everyone how to live a happy and peaceful life. Life in the Palace Buddhism is one of the major religions in the world. Soon after Prince Siddhartha was born, the wise men predicted that he would become a Buddha. At the age of sixteen, Prince Siddhartha married a beautiful princess, Yasodhara. The Four Sights Soon Siddhartha became disillusioned with the palace life and wanted to see the outside world. On his fourth trip, he saw a wandering monk who had given up everything he owned to seek an end to suffering. Renunciation Leaving his kingdom and loved ones behind, Siddhartha became a wandering monk. Enlightenment The Buddha Teaches The Last Years 1. 2. 3. 1. 1. 2. 3. 4. Related:  Buddhism and Buddhist schools • spécial à revoir

Secular Buddhism UK Teaching World History & Geography - Conceptual Frameworks What to teach: conceptual frameworks This is the second component of a world history and geography body of knowledge to be taught in school: ....... chronological narrative ....... conceptual frameworks ....... thinking strategies What are conceptual frameworks? It is the job of conceptual frameworks to connect and organize knowledge to make it more meaningful. The alphabet, for example, is an artificial structure imposed on spoken language that enables us to read and write. A review of literature from history education and cognitive research strongly suggests that conceptual frameworks, by whatever name, contribute to meaningful understanding and should be a major component of history education. Themes History and geography educators often speak in terms of "themes" that represent an interest in phenomena that are manifested across several historical periods and/or geographic locations, and thus may offer useful insights into how humans generally behave and how the world generally works.

Hopi mythology The Hopi maintain a complex religious and mythological tradition stretching back over centuries. However, it is difficult to definitively state what all Hopis as a group believe. Like the oral traditions of many other societies, Hopi mythology is not always told consistently and each Hopi mesa, or even each village, may have its own version of a particular story. But, "in essence the variants of the Hopi myth bear marked similarity to one another Major deities[edit] A mural depicting Tawa, the Sun Spirit and Creator in Hopi mythology. Most Hopi accounts of creation center around Tawa, the Sun Spirit. Masauwu, Skeleton Man, was the Spirit of Death, Earth God, door keeper to the Fifth World, and the Keeper of Fire. Maize is also vital to Hopi subsistence and religion. Feminist interpretations[edit] Some contemporary writers tend to posit an absolute importance of the feminine to the Hopi and attribute the role of a male Creator (Tawa) to intrusions into Hopi folklore of European beliefs.

Buddhism world religion founded by the Buddha Buddhism (, ) is the world's fourth-largest religion[3] with over 520 million followers, or over 7% of the global population, known as Buddhists.[web 1][5] Buddhism encompasses a variety of traditions, beliefs and spiritual practices largely based on original teachings attributed to the Buddha and resulting interpreted philosophies. It originated in ancient India as a Sramana tradition sometime between the 6th and 4th centuries BCE, spreading through much of Asia. Theravada Buddhism has a widespread following in Sri Lanka and Southeast Asia such as Cambodia, Laos, Myanmar and Thailand. Vajrayana, a body of teachings attributed to Indian adepts, may be viewed as a separate branch or as an aspect of Mahayana Buddhism.[11] Tibetan Buddhism, which preserves the Vajrayana teachings of eighth-century India, is practised in the countries of the Himalayan region, Mongolia,[12] and Kalmykia.[13] Life of the Buddha Buddha in Sarnath Museum (Dhammajak Mutra) Karma

Mesopotamian religion Mesopotamian religion refers to the religious beliefs and practices followed by the Sumerian and East Semitic Akkadian, Assyrian, Babylonian and Chaldeans living in Mesopotamia (a region encompassing modern Iraq, Kuwait, south east Turkey and north east Syria) that dominated the region for a period of 4,200 years from the fourth millennium BCE throughout Mesopotamia to approximately the 10th century CE in Assyria.[1] Mesopotamian Polytheism was the only religion in ancient Mesopotamia for thousands of years before entering a period of gradual decline beginning between the 1st and 3rd centuries CE. As with most dead religions, many aspects of the common practices and intricacies of the doctrine have been lost and forgotten over time. History[edit] Overview map of ancient Mesopotamia. The people of Mesopotamia originally consisted of two groups, the East Semitic Akkadians (later to be known as Assyrian and Babylonians) and the Sumerians who spoke a Language Isolate.

The religion of Buddhism Religions of the world Menu Quotation by Siddhãrtha Gautama (Buddha): "Do not believe in anything simply because you have heard it. Sponsored link Background: Buddhism currently has about 376 million followers and is generally listed as the world's fourth largest religion after Christianity, Islam and Hinduism. Topics covered in this section: Sponsored link: Amazon.com's online store lists the following books on Buddhism: If you see a generic Amazon.com ad here, please click on your browser's refresh key. For an introduction to Buddhism, we recommend the following books. Thubten Chodron, "Buddhism for Beginners." Not a sponsored link Site navigation: Copyright © 1996 to 2011 by Ontario Consultants on Religious Tolerance Latest update: 2013-JUL-08 Author: B.A. Sponsored link