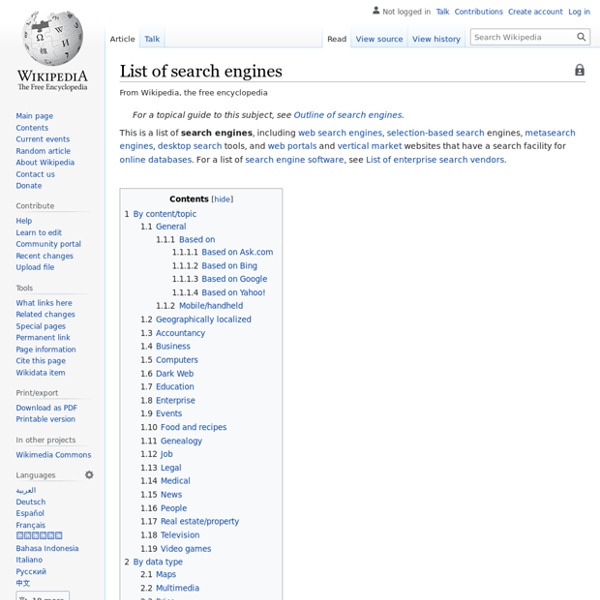 Carrot2 Clustering Engine Carrot2 Search Results Clustering Engine Carrot2 organizes your search results into topics. With an instant overview of what's available, you will quickly find what you're looking for. Choose where to search: Type your query: More options Personator - Identity Validation Tool Validate the identity of a U.S. or Canadian individual with limited input data. Use any single or combination input of name, address, phone number, ZIP Code, Melissa Address Key (MAK), or full/partial SSN and we will match it against our records to verify the identity and find more contact information. Enter a name and choose the best match to find the related address, phone, email, and demographic information. Enter an email, phone or address to find the related name and additional details. Enter a name and last four or full SSN to verify SSN matches name. Use the Free Form input to copy and paste any combination of name, address, phone or email.

The Boogaloo Movement Is Not What You Think On May 26th, crowds gathered in Minneapolis, Minnesota, to protest the death of 46-year-old George Floyd at the hands of the city’s police department. Floyd was black. Many of the protesters were people of color. The department fired four policemen that same day, after footage emerged appearing to show Floyd being strangled by a white officer; the video shows him placing his knee on Floyd, cutting off his air supply. Firing these officers was not enough to defuse anger in the city where less than four years previously, a police officer shot a black man, Philando Castile, dead at a traffic stop after Castile informed him he had a legally purchased firearm.

On practicing safe search: fine tuning, privacy-friendly searches, and learning more As librarians, we need to be concerned about privacy. ALA’s Policy Statement on Privacy reminds us Libraries, librarians, and library workers have an ethical obligation, expressed in the ALA Code of Ethics, to preserve users’ right to privacy and prevent any unauthorized use or disclosure of users’ personally identifiable information or the data associated with their use of the library’s resources. Just as we protect the confidentiality of user borrowing records, we need to prepare our students to protect their own privacy online. Fine tuning the usual suspects We might begin by encouraging students to be aware of their privacy options when they use old familiar tools.

Elongated Skulls Discovered Offer Bizarre Clues About Roman Empire's Collapse Artificially elongated skulls discovered in Hungary have offered valuable evidence of life during the Roman Empire’s collapse. People in different cultures and countries put themselves through a whole lot of physical changes — cosmetic or otherwise — in an attempt to conform to their society’s standard of beauty. The practice of foot binding in China comes to mind, or the American obsession with plastic surgery to “improve” appearance. But skull binding? Though the practice may sound odd and even cruel, it was in fact quite common as far back as the Paleolithic era in areas of central Asia. It then became popular in central Europe around the 2nd and 3rd centuries A.D. , and remained popular until about the middle of the 5th century A.D.

21 Alternative Search Engines To Use in 2020 When we talk about SEO and search engines, we instantly think of Google. But did you know there are lots of alternative search engines out there with just as much to offer? Google is a globally recognized search engine and an industry giant, in fact, even the second biggest “search engine” is Google Images, according to this study: Search engine market share

China has built 380 internment camps in Xinjiang, study finds China has built nearly 400 internment camps in Xinjiang region, with construction on dozens continuing over the last two years, even as Chinese authorities said their “re-education” system was winding down, an Australian thinktank has found. The network of camps in China’s far west, used to detain Uighurs and people from other Muslim minorities, include 14 that are still under construction, according to the latest satellite imaging obtained by the Australian Strategic Policy Institute. In total ASPI identified 380 detention centres established across the region since 2017, ranging from lowest security re-education camps to fortified prisons.

(W)Archives: That Time Britain and France Almost Bombed the Soviet Union Today, NATO is forced to consider the possibility of war with a revanchist Russia over the Baltic states. And of course, during the Cold War the prospect of military action against the Soviet Union seemed all too real. Not many people recall, however, that in the early days of World War II Britain and France seriously contemplated bombing the Soviet Union in Operations PIKE and RASPBERRY. Declassified documents housed at the U.S. National Archives at College Park, Maryland and Kew, London allow us to remember this remarkable period, which could have had radical implications for 20th-century history.

'He became a hero': Bolsonaro sees popularity surge as Covid-19 spreads Brazil’s hard-right president, Jair Bolsonaro, dismissed Covid-19 as a “little flu”, and said it should be faced “like a man, not a boy”. He sneered that self-isolating was “for the weak” and raged against lockdown measures. He clashed with state governors, and his own former health minister savaged his handling of the pandemic. But as Brazil counts nearly 5 million Covid-19 cases and more than 147,000 dead, Bolsonaro is more popular than ever. Like his idol Donald Trump, the populist Brazilian leader caught the virus and emerged apparently unscathed.