40 Maps That Will Help You Make Sense of the World 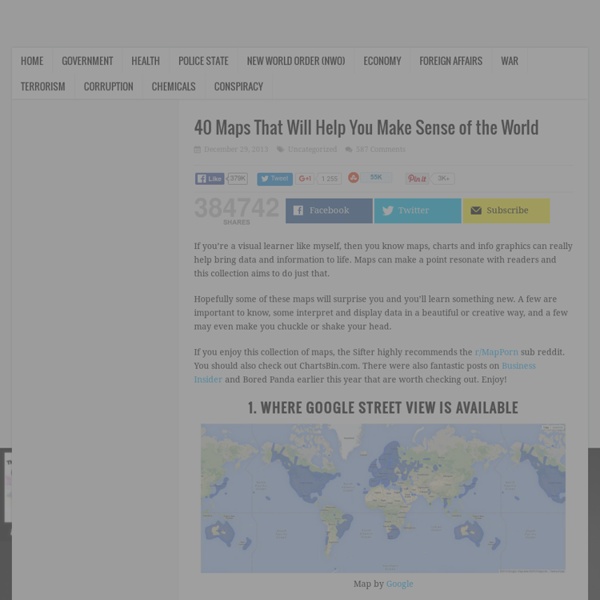 If you’re a visual learner like myself, then you know maps, charts and info graphics can really help bring data and information to life. Maps can make a point resonate with readers and this collection aims to do just that. Hopefully some of these maps will surprise you and you’ll learn something new. A few are important to know, some interpret and display data in a beautiful or creative way, and a few may even make you chuckle or shake your head. If you enjoy this collection of maps, the Sifter highly recommends the r/MapPorn sub reddit. You should also check out ChartsBin.com. 1. Map by Google 2. Map via Wikimedia Commons 3. Map by Stuart Laycock (via The Telegraph) 4. Map by eatrio.net via Reddit Pangea was a supercontinent that existed during the late Paleozoic and early Mesozoic eras, forming about 300 million years ago. 5. Map by Business Management EU 6. Map by The New York Times 7. Map by Teepr on Reddit 8. Map by ChartsBin.com 9. Map by Phoenix B 1of3 10. Map by Carna Botnet via Reddit

Linguistic Composition Map of Iran, Color Coded map of all languages spoken in Iran, Farsi, the most widely spoken Persian Language, a Farsi Dictionary, Farsi English Dictionary, The spoken language in Iran, History of Farsi Language, Learn Farsi, Farsi T Farsi - Persian Language Persian Language, also known as Farsi, is the most widely spoken member of the Iranian branch of the Indo-Iranian languages, a subfamily of the Indo-European languages. It is the language of Iran (formerly Persia) and is also widely spoken in Afghanistan and, in an archaic form, in Tajikistan and the Pamir Mountain region. Human the movie HUMAN, a film by Yann Arthus-Bertrand. Turn on the Closed Captions (CC) to know the countries where the images were filmed and the first name of the interviewees. What is it that makes us human ?

27 Incredibly Creative Print Ads You'll Love With how often each of us are online or using our mobile phones, you would think that print advertising is an antiquated artwork that no one pays real attention to. You’d be wrong, though. We found 27 of the most stunning or clever print ad campaigns out there. They are seriously impressive, even though they are completely static (unlike most of the ads we see online). THIS is advertising. Earthquake Hazard Maps The maps displayed below show how earthquake hazards vary across the United States. Hazards are measured as the likelihood of experiencing earthquake shaking of various intensities. How to read the maps

The World’s Most Spoken Languages In One Fascinating Infographic Whenever I meet someone of a different ethnicity, out of sheer curiosity, I always ask if they speak the language of their heritage. I was born in Canada, but grew up with Punjabi speaking parents. I also studied French, Japanese, and Korean, and like to see language as almost a binding agent that helps smooth over communication. Business deals can go in a completely different direction if someone knows even a few words of another language, and, let’s be honest, traveling around the world and practicing different words you’ve picked up is fun. Having even a rudimentary understanding of another language also allows you to connect with someone of a different culture much more quickly, and people generally appreciate any efforts of communication in their own tongue.

26 of the Most Thought Provoking Photographs of All Time We frequently say a “photograph is worth a thousand words”, but sometimes they are worth even more. In this incredible series of photographs, the lens captures scenes that take us deep emotional journeys causing feeling ranging from uplifting joy to overwhelming sadness. The thought provoking power of these photos start us on a journey of thought and feeling that exceeds “a thousand words” with ease. The photo of the starving child’s hand being gently held by a missionary brings us feelings of despair and questions of how to help. The vision of the exhausted surgeon and his assistant remind us of the immense sacrifice many doctors give to save lives and practice medicine. Each of these pictures capture moments filled with raw emotion and powerful stories, proving the impact of the camera.

1846 - mrlincolnandfreedom.org Menu Preface by Lewis Lehrman Introduction by Richard Behn Credits This map shows how Europe's population changed and shifted in the first decade of the 21st century Immigration – I know this sounds unlikely, but bear with us a moment here – is in the news rather a lot at the moment. For one thing, there's the Mediterranean migrant crisis, which EU leaders are meeting to discuss this week. Then there's the non-stop thrill ride of Britain's debate over whether or not it's a good idea to alienate the entirety of the continent just across the English Channel; one of the main arguments put forward by the Eurosceptic and definitely not racist right-wing party UKIP is that pulling out of Europe would give us back control of our borders.

33 Awesome Inspirations for Your Dream Home Each of us probably have an idea about what our individual dream homes would look like. Maybe your dream home would have a hammock ... or maybe an indoor slide that leads outside into a pool filled with Jell-O. You can have whatever you want, after all, it's YOUR dream home. But if you need some inspiration, here are 33 awesome things you might want to include in the house of your fantasies. 1. A ping pong table door See the Historic Maps Declassified by the CIA Shortly after the attacks of September 11, 2001, U.S. President George W. Bush and several advisors gathered at Camp David to weigh the country’s options. On the table in front of them, as you can see in the photo below, was a map of Afghanistan created by cartographers at the Central Intelligence Agency. It was among the first of what would become thousands of maps the CIA produced after September 11 to track terrorist networks and support U.S. military operations, including the raid to capture Osama bin Laden in 2011. As with much of the CIA Cartography Center’s work, these maps were classified, seen only by people in the intelligence community and at the highest levels of the government.