History of Cartography: Volumes One, Two, and Three 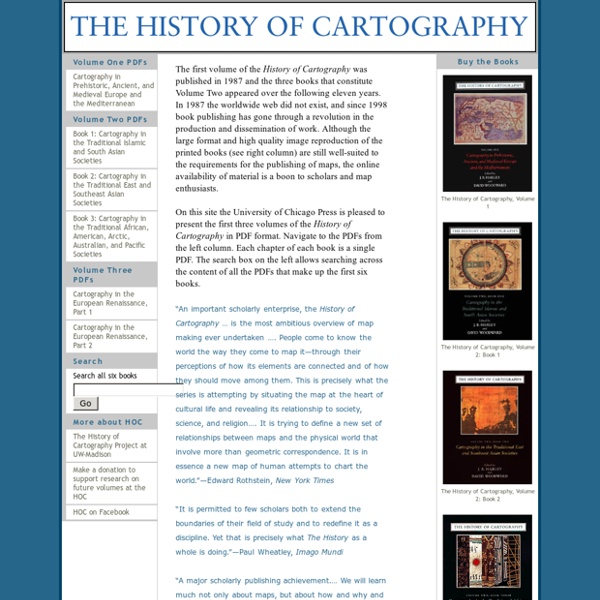 Old maps of Seven Seas (Open Ocean) How does it work? These instructions will show you how to find historical maps online. Getting started Type the place name in the search box to find the exact location. Zoom Zoom in and out with the buttons or use your mouse or touchpad natively. Exact Area tool Click here and draw a rectangle over the map to precisely define the search area. Set filters Narrow your search with advanced settings, such as Years (from/to), Fulltext, Publisher, etc. Results See the results of your search on the right side.

1780 to 1784 Pennsylvania Maps The end of the Revolutionary War, settled by the Treaty of Paris early in 1783, resulted in many maps published that year. Maps issued in previous years with "British colonies" or similar title words were reissued in the 1780's with "United States" in the title, and few other changes. The first map of the United States 'compiled, engraved, and printed by an American' was Abel Buell's A NEW AND CORRECT MAP OF THE UNITED STATES OF NORTH AMERICA LAYD DOWN FROM THE LATEST OBSERVATIONS AND BEST AUTHORITY AGREEABLE TO THE PEACE OF 1783, published in 1784. The map is included in Schwartz & Ehrenberg and other map histories, and shows the American flag printed on a map for the first time. Read !! The Feminine SolutionTo All The Worlds Problems !!

Appalachian Mountain Club's Equipped: Nearly Every USGS Topo Map Ever Made. For Free. The U.S. Geological Survey (USGS) has been producing detailed topographic maps for more than 125 years. Today they are nearly all digitized and free to download through the USGS Map Store, an incredible treasure trove for both map junkies and casual hikers alike. Locating your desired map is straightforward with the USGS Map Locator and Downloader, which allows you to zoom in or search for your area of interest. It then gets mildly confusing (though easy once you figure it out) to download the actual map. To do so, find your desired location and select the type of map you wish to download (usually the 7.5-minute versions, which provide the most detail). Next mark a point within your desired map by first selecting the button next to "Mark Points" and then clicking anywhere within the area of interest. One important thing to note is that, in general, the most recent topo maps listed are markedly different from their predecessors. “Equipped” is an AMC Outdoors blog, written by Matt Heid.

Home - Gough Map An Illustrated Guide to Space Maps Nebra Sky Disc, Germany, 1600 BC. (Photo: Rainer Zenz/WikiCommons CC BY-SA 3.0) With its patinated bronze background and shiny gold sun, moon and stars, the 3600-year-old Nebra Sky Disc is worth gazing at for its beauty alone. But the ancient object is cool for a lot of other reasons: It’s the earliest depiction of outer space we’ve ever found, and it’s also thought to be the oldest known portable astronomical instrument. For as long as humans have stared at the sky, we have sought to understand our place in the cosmos. This lovely orb is one of a long line of attempts of humans to map the unmappable—space. The story behind the disc’s discovery is almost as crazy as the disc itself: it was dug up by metal-detector- wielding treasure hunters in 1999, along with “two swords, two axes, a chisel, and fragments of armlets.” Is it art or science? From the Harmonia Macrocosmica, Holland, 1660. From the Harmonia Macrocosmica, Holland, 1660. "Idea dell'Universo." "Systema Solare et Planetarium."

Using Google To Map The Yellowstone Trail In Washington - AMERICAN ROAD® FORUM—the ultimate road trip planning community. Copyright AMERICAN ROAD, LLC 2006-2011 I'll be taking a two-day quick trip across Washington traveling as much as possible upon the old Yellowstone Trail. Unlike other old roads that I've traveled (Route 66, etc), there's no guide book to tell me to "turn left at crappy dirt road and hope for the best." So I had to gather some common sense, maps, hearsay, luck and prayers and map it out myself. I think I done good. But certainly not perfect. Not by a long shot. Here are links to how I'll be driving it with a little explanation along the way. Each link will go to a map on GoogleMaps. Seattle to Fall City (early more northerly alignment according to 1917 & 1924 Blue Books and others)*YT used 4th Ave, south to Jackson, but you can no longer go that way - used 2nd instead. Seattle to Fall City (later more southerly alignment - post 1925ish)*This is mostly based upon Hobb's 1926 map/guide. There was an even earlier alignment through Seattle, but the routing from the 1916 Blue Book makes no sense when compared with modern Seattle.

Anglo-Saxon London Map The full map in overview. A high-resolution version can be found by clicking below. Central London was once largely marshland. The first major Anglo Saxon settlement was Lundenwic (now Covent Garden/Aldwych). South London, with some familiar place names. The Thames near Chiswick, which means ‘cheese farm’. North-west London, with the ‘nose-shaped hill’ (Neasdun), Wemba Lea and the curling River Brent, which still flows through the area. The eastern Thames, showing Charlton, Woolwich and Plumstead and, to the north, the important abbey town of Barking (Bercingum). Click here for the full-resolution Anglo-Saxon map (3.2 MB). Three years ago, we put together a map showing the London area in Anglo Saxon times (roughly speaking, 500-1066AD). We’ve now updated the map, based on feedback and further research. The map comes with a few caveats.

burnunit / Ethereal Cartography A Republic of Desire The locus of the end points of projected desires and imagined journeys from my home(s), 1978-2009. All projections A rainbow of imagined thrusts into the world. at six years the extent of my ideas was minimally detailed—a desire to see the places in stories I'd heard, an inexplicable curiosity about Russia and the USSR. at around 13 The next several years saw many additions to my list of places, goals real or imagined, and inspiration from stories. at around 20 I became much less ambitious for a time, or rather, Romantic. up to and around twenty five or so the romance extended: a vision of *walking tours* of great long adventures exploring in depth. thirty Very *focused* desires, with a minimum of extraneous distractions: a consuming need to return to Minnesota, around which all others revolved. at present A distinct SF0 focus, with some recurrent themes as well. overlay with tracing

Wagner & Debes Cartographers English: The Leipzig Geographical Institute of Wagner & Debes was important German cartographic printer and publisher of cartographic work in the 19th- and early 20th century. Established in 1835 as a lithographic press by Eduard Wagner, who worked with cartography publisher Karl Baedeker. In 1872 Heinrich Wagner, son of Eduard Wagner, took over, moved the presses to Leipzig, and established his own publishing firm in collaboration with Ernst Debes. Subcategories This category has the following 2 subcategories, out of 2 total.

Ariock / Strip Map INSTRUCTIONS: Create a strip map modeled on Ogilby's maps. "A strip map is a process map, a diagram of how to go from one place to another; route and destinations are predetermined. Ordinary maps are state maps describing the whole countryside; the user decides where to go from wherever he is." Your map should provide an intimate description of what might be seen on a journey, from a slow moving vehicle or on foot. Be sure to examine the example image below. This strip map is a loop around my neighborhood, and as I walked around, I looked for things that I might not notice otherwise along the way. Note that this map does not contain at least 8 of the 10 elements that are required for a map. The map is not to scale.

USGS Historical Topographic Maps Accessing historical topographic maps has never been easier TopoView highlights one of the USGS's most important and useful products, the topographic map. In 1879, the USGS began to map the Nation's topography. This mapping was done at different levels of detail, in order to support various land use and other purposes. As the years passed, the USGS produced new map versions of each area. This interface was created by the National Geologic Map Database project (NGMDB), in support of topographic mapping program managed by the National Geospatial Program (NGP). Packed with new features and downloadable file formats The maps shown through topoView are from the USGS’s Historical Topographic Map Collection (HTMC). GeoTIFF – The GeoTIFF files are a compressed, 300 dpi TIFF image format, with embedded georeferencing information so that the map can be used directly in a Geographic Information System (GIS). Send us your feedback