Global warming is melting the Greenland Ice Sheet, fast. A new study measures the loss of ice from one of world’s largest ice sheets. 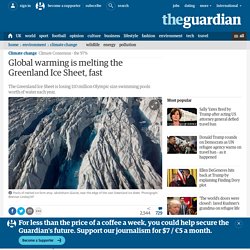 They find an ice loss that has accelerated in the past few years, and their measurements confirm prior estimates. As humans emit heat-trapping gases, we expect to see changes to the Earth. One obvious change to be on the lookout for is melting ice. This includes ice atop mountains, ice floating in cold ocean waters, and the ice within large ice sheets or glaciers. It is this last type of ice loss that most affects ocean levels because as the water runs into the oceans, it raises sea levels. So measuring ice sheet melting is important, not only as a signal of global warming but also because of the sea level impacts. 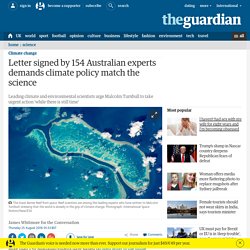 The letter, organised by the Australian National University climatologist Andrew Glikson, calls on the federal government to make “meaningful reductions of Australia’s peak carbon emissions and coal exports, while there is still time”. The 154 signatories include leading climate and environmental scientists such as the Climate Council’s Tim Flannery, Will Steffen and Lesley Hughes, as well as reef scientists Ove Hoegh-Guldberg and Charlie Veron. They point out that July 2016 was the hottest month on record, and followed a nine-month streak of record-breaking months. 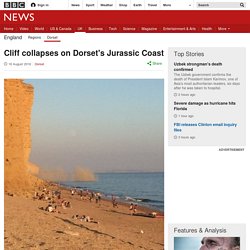 The fall happened at the East Cliff side of West Bay, near Bridport, at about 19:40 BST. 'Unusual and enigmatic' long-finned pilot whales spotted off Welsh coast. Image copyright Mick Baines/ Sea Watch Foundation. 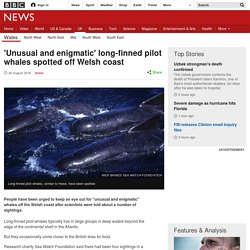 Why Are Dolphins Dying on East Coast? Experts Alarmed. Bottlenose dolphins are washing up dead in unusually high numbers along the U.S. 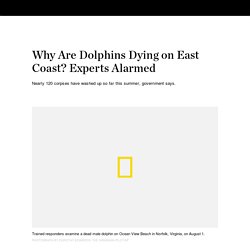 East Coast this summer—a "very alarming" situation that has experts scrambling to decipher the cause. Nearly 120 corpses have washed ashore in coastal states from New York to Virginia in July and the first week of August, which is much higher than the normal number of strandings attributed to natural deaths. West Antarctica Glaciers Collapsing, Adding to Sea-Level Rise. A massive glacier system in West Antarctica has started collapsing because of global warming and will contribute to significant worldwide sea-level rise, two teams of scientists warn in a pair of major studies released Monday. 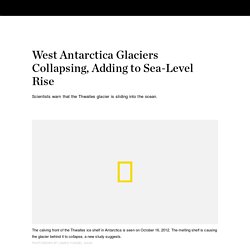 Scientists had previously thought the two-mile-thick (3.2 kilometers) glacier system would remain stable for thousands of years, but new research suggests a faster time frame for melting. A rapidly melting section of the West Antarctic Ice Sheet appears to be in irreversible decline and will sink into the sea, scientists at the University of California, Irvine and NASA reported Monday.

"This retreat will have major implications for sea-level rise worldwide," said Eric Rignot, a UC-Irvine Earth science professor and lead author of a study to be published in a journal of the American Geophysical Union. Polar Ice Sheets Shrinking Worldwide, Study Confirms. The polar ice sheets are indeed shrinking—and fast, according to a comprehensive new study on climate change. 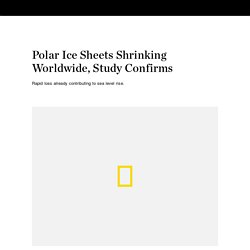 And the effects, according to an international team, are equally clear—sea levels are rising faster than predicted, which could bring about disastrous effects for people and wildlife. Rising seas would increase the risk of catastrophic flooding like that caused by Hurricane Sandy last month in New York and New Jersey. 16-foot Waves Measured in Arctic Ocean Where There Was Once Only Ice. Sixteen-foot waves are buffeting an area of the Arctic Ocean that until recently was permanently covered in sea ice—another sign of a warming climate, scientists say. 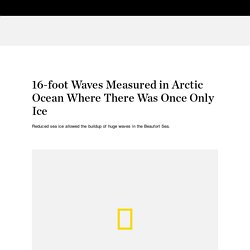 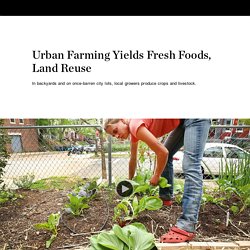 Urban Heat May Warm Faraway Places. The massive amounts of heat produced by cities may be heating up rural areas 1,000 miles (1,600 kilometers) away, atmospheric researchers have found in a new modeling study. 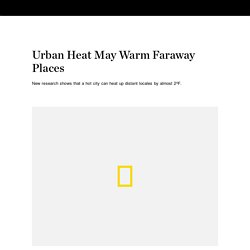 Scientists have long invoked the "urban island heat effect" to explain why cities are generally hotter than suburban and rural areas. Erupting Volcano Lets Scientists Watch Rare Caldera Collapse. As gateways to the seething-hot heart of our planet, volcanoes are feared for their occasionally cataclysmic behavior. From Vesuvius to Krakatau, some of the most devastating eruptions in human memory have one calamitous factor in common: caldera collapse.

Usually rapid and unannounced, only seven known collapses have occurred since the start of the 20th century, and scientists have been puzzling over the mechanism behind these events for more than a hundred years. So when the massive Bárðarbunga volcano in Iceland’s remote southeastern interior started demonstrating caldera formation in slow motion, researchers had an unprecedented opportunity to better understand the process. Reporting today in the journal Science, a team of 47 scientists and data modelers from nine countries, led by geophysicist Magnús Gudmundsson of the University of Iceland, describes the evolution of Bárðarbunga’s caldera from August 2014 to February 2015. Anatomy of a Disaster. Japan Earthquake Not the "Big One?" Though Friday's Japan earthquake—which spawned a tsunami and damaged a nuclear power plant—was the largest to strike the country since the dawn of modern seismology, it wasn't the long dreaded "big one," experts say.

Not because the magnitude 9 earthquake wasn't big, but because it was in the wrong place. (See Japan earthquake and tsunami pictures.) World’s Oldest Fossils Discovered Due to Climate Change. Bound for Marriage as a Child, Now a Change Agent for Kenyan Girls. First Ever Confirmed Case of Puppy Identical Twins. Behold, This Is Our First Picture of Jupiter’s North Pole.