Digital Atlas of the Roman Empire 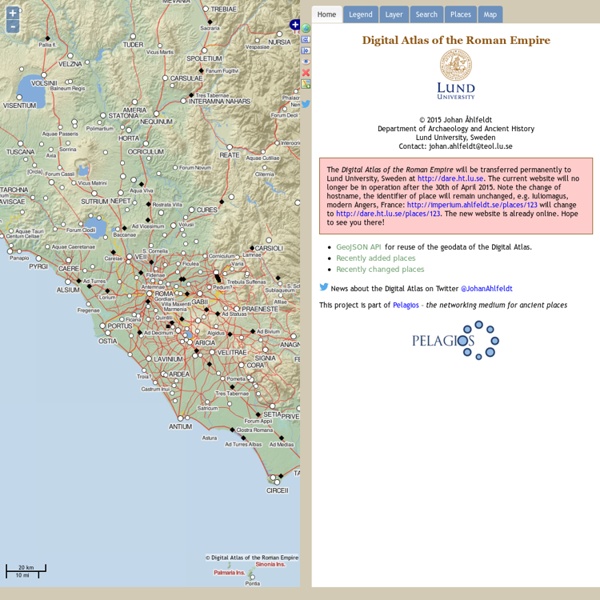 Maecenas: Images of Ancient Greece and Rome 408,330 visitors before 21 March, 2002, visitors since then Images are copyrighted, but may be used for non-commercial purposes. Click here to see the images If the search engine is out of service, you can use back-up search engine. 10 must see ancient greek temples HeritageDaily Back in Ancient Greece the temple was the most important building. The first temples to be constructed from stone began to appear in the 6th century. The Greek temples were not used as places of worship, but rather as monuments to their beloved gods and goddesses. Moneta: Ridiculous Portraits! Inspired by a little Twitter conversation with Andrew Woods (numismatics, York museums), this blog is dedicated to those imperial portraits that seem so patently ridiculous that you wonder how on earth they were ever approved. And believe me, there are some stonkingly awful portraits of the emperors out there.*

DMMapp - Digitized Medieval Manuscripts App What is the DMMapp? The DMMapp is an open source app that links to digital repositories containing digitized western medieval manuscripts from all over the world. Finding digitized repositories can be difficult, and we want to create a central hub that can help medievalists, codicologists, and enthusiasts to find the medieval manuscripts they are searching for. Who made the DMMapp? The DMMapp is a project by Giulio Menna, MA, and Marjolein de Vos, MA. A Wonderfully Stereotypical 1970s Map of New York How might a person who’s never left New York City view the rest of the world? Perhaps with Manhattan taking up 80 percent of the U.S., the other four boroughs 10 percent, the Midwest completely nonexistent, and foreign countries reduced to vague presences somewhere across the water. That’s the view of this wonderful 1970s map lampooning a New Yorker’s self-centered geography. The snarky cartographer remains anonymous, according to the David Rumsey Map Collection.

Diotima: Women & Gender in the Ancient World Call for Collaborators to The On-line Companion to The Worlds of Roman Women The On-Line Companion to the Focus Reader, The Worlds of Roman Women, expands the book's wide representation of Latin texts by and about women dating from the earliest periods through the fourth century CE. The medium of a website, moreover, offers the opportunity to integrate visuals to texts, thus enabling users to make connections between language and material culture. The Companion has two major parts. The Worlds section includes Class, Religion, Childhood, Learning, Marriage, Family, Body, State, Work, and Flirtation. 10 must see roman sites across the world HeritageDaily The Roman era is one of the most well known among today’s civilization, it is an era of history that is taught at the majority of schools and was so widespread that you can visit many different parts of the world and still manage to stumble upon some Roman ruins. Listed are some of the most majestic and dominating Roman structures that still stand today that cannot be missed. 1 Palmyra Palmyra is located in Syria and its ruins are listed as a UNESCO World Heritage Site. The city contains some of the empire’s most well preserved ruins. Temple of Bel, Palmyra: WikiPedia

Five Hardcore Deaths Suffered By Roman Emperors It is ironic that the ancient world that created the adage “moderation in all things” could disregard this counsel in flagrant fashion. We’ve recently written about a number of various Greco-Roman excesses, from certain Roman gastronomic overindulgences to grotesquely imaginative Greek torture methods. Today, continuing this trend, we bring you a short list of the most gruesome deaths of Roman emperors, based on The Awl’s 2012 post, “Roman Emperors, Up To AD 476 And Not Including Usurpers, In Order Of How Hardcore Their Deaths Were” compiled by Josh Fruhlinger. Without further ado, and in no particular order, here is the list: To follow with this fratricidal motif, Caracalla himself was murdered in 217 by a man whose brother Caracalla may have had killed just days earlier. Caracalla had stopped on the side of a road to urinate while journeying to Edessa, and was dispatched by Julius Martialis, one of his bodyguards, with a single sword blow.