A Real-Time Map of Births and Deaths 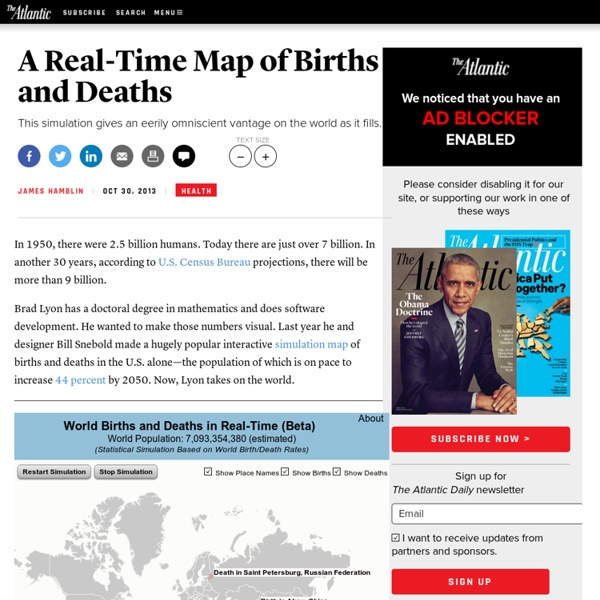 In 1950, there were 2.5 billion humans. Today there are just over 7 billion. In another 30 years, according to U.S. Census Bureau projections, there will be more than 9 billion. Brad Lyon has a doctoral degree in mathematics and does software development. He wanted to make those numbers visual. "This one for world births/deaths is certainly more overwhelming than the one for the U.S.," Lyon told me, "and the rate at which they must be occurring gives another glimpse into how big the world is." That is to say, watch this and everything you're worried about today becomes nothing. "What got me interested initially," Lyon said, "was simply curiosity about what the pattern of births and deaths might be like, based on the current rates, coupled with the desire to learn more about some of the newer technologies for the web." In this case, that technology is primarily d3.js, a javascript library by New York Times graphics editor Michael Bostock.

True Blood: Personality and Blood Types in Japan A blood type towel: not as gross as it sounds. Sometimes, it’s the small cultural differences you notice more than the big ones. For me, one of the most interesting things about Japanese culture is the fascination with blood types. 10 Maps That Will Change How You View The World Maps are one of those things you can lose yourself in for hours. Since their humble origins as scribbles in the sand thousands of millennia ago, maps have been useful companions during the development of human culture and society. Now, in an age of seemingly endless information, maps are more abundant, advanced and fascinating than ever before. Here are some of the most interesting maps we could find; hopefully, they will leave you looking at our little "pale blue dot" with a fresh perspective. Goode Homolosine Projection Image credit: Strebe/Wikimedia Commons

Is Google God? By Matt MacPherson Google is the closest thing to an Omniscient (all-knowing) entity in existence, which can be scientifically verified. She indexes over 9.5 billion WebPages, which is more than any other search engine on the web today. Not only is Google the closest known entity to being Omniscient, but She also sorts through this vast amount of knowledge using Her patented PageRank technology, organizing said data and making it easily accessible to us mere mortals. 8 Maps Showing How The US Fits Into The Rest Of The World How the US Population Fits in Europe by reddit user jackblack2323 The US is the third most populous country on earth, with over 320 million people according the current U.S. Census Population Clock. Yet, only around 4.4% of the world’s people live in the country and considering it’s only the 180th most densely populated country on earth, it’s rather sparsely populated.

Germany passes Japan to have world's lowest birth rate - study A study says Germany's birth rate has slumped to the lowest in the world, prompting fears labour market shortages will damage the economy. Germany has dropped below Japan to have not just the lowest birth rate across Europe but also globally, according to the report by Germany-based analysts. Its authors warned of the effects of a shrinking working-age population.

100 Things we all should Know Website Design that makes your website work Website designers in Pretoria, Gauteng Have you had bad run-ins with web designers ?Have you been made promises re your website that were not kept ?Do you feel that you paid money for a website that does not work ?Are you weary of webdesigners and web design companies ? Religions and Language Families in Europe.[[MORE]]... Religions and Language Families in Europe. by midnightrambulador Europe: Pick Your Master RaceReligion and language have been two of the most important factors in shaping cultural identities. So I thought it would be interesting to see language families and religious denominations overlaid on a single map of Europe, and since I couldn’t find such a map, I decided to make one myself. My sources are this map for religion and this one for language (and liberal cross-checking with Wikipedia for both).The classic idea is that “Northern Europe” is Germanic and Protestant, “Southern Europe” Romance and Catholic, and “Eastern Europe” Slavic and Orthodox. And sure enough, these three are the most prominent combinations on the map.

37 maps that explain how America is a nation of immigrants by Dara Lind on October 2, 2015 American politicians, and Americans themselves, love to call themselves "a nation of immigrants": a place where everyone's family has, at some point, chosen to come to seek freedom or a better life. America has managed to maintain that self-image through the forced migration of millions of African slaves, restrictive immigration laws based on fears of "inferior" races, and nativist movements that encouraged immigrants to assimilate or simply leave. But while the reality of America's immigrant heritage is more complicated than the myth, it's still a fundamental truth of the country's history.