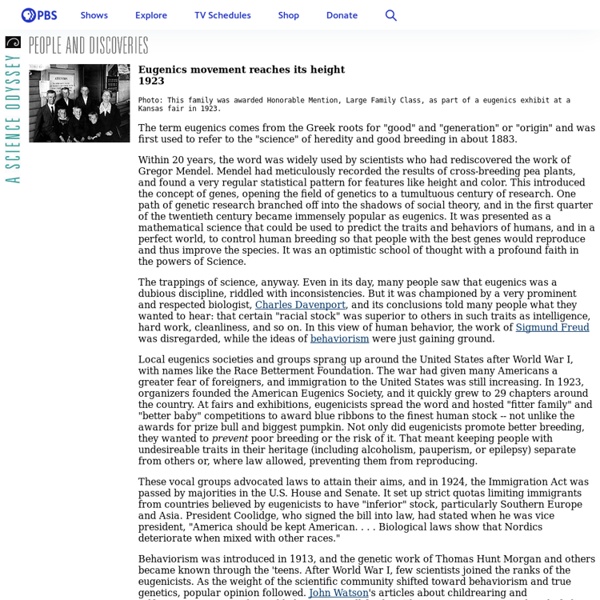 Eugenics movement reaches its height1923 Photo: This family was awarded Honorable Mention, Large Family Class, as part of a eugenics exhibit at a Kansas fair in 1923. The term eugenics comes from the Greek roots for "good" and "generation" or "origin" and was first used to refer to the "science" of heredity and good breeding in about 1883. Within 20 years, the word was widely used by scientists who had rediscovered the work of Gregor Mendel. Mendel had meticulously recorded the results of cross-breeding pea plants, and found a very regular statistical pattern for features like height and color. The trappings of science, anyway. Local eugenics societies and groups sprang up around the United States after World War I, with names like the Race Betterment Foundation. These vocal groups advocated laws to attain their aims, and in 1924, the Immigration Act was passed by majorities in the U.S.

Did Shakespeare really write his own plays? — Ask HISTORY — History Q&A Most scholars accept that William Shakespeare was born in Stratford-upon-Avon, and spent time acting in London before returning to Stratford, where he lived until his death in 1616. But actual documentation of his life is pitifully scarce: little more than several signatures, records of his marriage to Anne Hathaway and the birth of their children, a three-page will and some business papers unrelated to writing. Above all, nothing has been found documenting the composition of the 37 plays and 154 sonnets attributed to him, collectively considered the greatest body of work in the history of the English language. In the absence of such “proof” of authorship, some skeptics have posed the question: How could a man of such humble origins and education come by such wealth of insight, wide-ranging understanding of complex legal and political matters and intimate knowledge of life in the English court?

Library : Introduction to Eugenics | Catholic Culture by John Cavanaugh-O'Keefe Description This article summarizes a booklet from American Life League that gives the definition and history of the eugenics movement throughout the world, beginning with the idea of ethnic cleansing and continuing on to a discussion of selective genetics and population control as advocated by Planned Parenthood. Publisher & Date American Life League, 1995 The principal manifestations of eugenics are racism and abortion. Eugenics is the study of methods to improve the human race by controlling reproduction. A Study ... Galton defined eugenics as "the science of improvement of the human race germ plasm through better breeding." A Program ... The American Journal of Eugenics (1906) defined it as "the science of good generation" and noted that the Century Dictionary defined it (rather primly) as "the doctrine of Progress, or Evolution, especially in the human race, through improved conditions in the relations of the sexes." In 1970, I. A Religion ...

The Case Against Perfection - Magazine Breakthroughs in genetics present us with a promise and a predicament. The promise is that we may soon be able to treat and prevent a host of debilitating diseases. The predicament is that our newfound genetic knowledge may also enable us to manipulate our own nature—to enhance our muscles, memories, and moods; to choose the sex, height, and other genetic traits of our children; to make ourselves "better than well." When science moves faster than moral understanding, as it does today, men and women struggle to articulate their unease. In liberal societies they reach first for the language of autonomy, fairness, and individual rights. But this part of our moral vocabulary is ill equipped to address the hardest questions posed by genetic engineering. Consider cloning. Some say cloning is wrong because it violates the right to autonomy: by choosing a child's genetic makeup in advance, parents deny the child's right to an open future. Muscles. Memory. Height. Sex selection.

Artificial intelligence and nanotechnology 'threaten civilisation' - Futurism Synopsis AI and nanotechnology have been named alongside nuclear war, ecological catastrophe and super-volcano eruptions as risks that threaten humanity in a report by the Global Challenges Foundation. Summary In the case of AI, the report suggests that future machines and software with “human-level intelligence” could create new, dangerous challenges for humanity – although they could also help to combat many of the other risks cited in the report.The report also warns of the risk that “economic collapse may follow from mass unemployment as humans are replaced by copyable human capital”, and expresses concern at the prospect of AI being used for warfare: “An AI arms race could result in AIs being constructed with pernicious goals or lack of safety precautions.”While it notes that nanotechnology could also have a range of benefits, it could also lead to the easy construction of large arsenals of conventional or more novel weapons made possible by atomically precise manufacturing.

Eugenics debate The sixth mass extinction is here, say Stanford researchers Cumulative vertebrate species recorded as extinct or extinct in the wild by the IUCN (2012) (conservative estimate) (credit: Gerardo Ceballos et al./Science Advances) There is no longer any doubt: we are entering a mass extinction that threatens humanity’s existence. That’s the conclusion of a new study by a group of scientists including Paul Ehrlich, the Bing Professor of Population Studies in biology and a senior fellow at the Stanford Woods Institute for the Environment. “[The study] shows without any significant doubt that we are now entering the sixth great mass extinction event,” Ehrlich said. Although most well known for his positions on human population, Ehrlich has done extensive work on extinctions going back to his 1981 book, Extinction: The Causes and Consequences of the Disappearance of Species. According to the study, there is general agreement among scientists that extinction rates have reached levels unparalleled since the dinosaurs died out 66 million years ago.

Eugenics 1. Short history of eugenics Although philosophers have contemplated the meaning and value of eugenics at least since Plato recommended a state-run program of mating intended to strengthen the guardian class in his Republic, the modern version of eugenics had its start with the 19th century cousin of Charles Darwin, British scientist Francis Galton (1883). Galton was interested in “improving human stock” through scientific management of mating; his explicit goal was to create better humans. His ideas were taken up widely in the early part of the 20th century by seemingly well-intended scientists and policy makers, particularly in the United States, Britain, and the Scandinavian countries. Eugenicists had two-fold aims: to encourage people of good health to reproduce together to create good births (what is known as “positive” eugenics), and to end certain diseases and disabilities by discouraging or preventing others from reproducing (what is known as “negative” eugenics). 2. 3.

5 Psychological Experiments That Prove Humanity is Doomed Cracked.com's new book is now on sale. What follows is one of 22 classic articles that appear in the book, along with 18 new articles that you can't read anywhere else. Psychologists know you have to be careful when you go poking around the human mind because you're never sure what you'll find there. Oh, we're not talking about the occasional psychopath who turns up. The Asch Conformity Experiment (1953) The Setup: Solomon Asch wanted to run a series of studies that would document the power of conformity, for the purpose of depressing everyone who would ever read the results. Subjects were told that they would be taking part in a vision test, along with a handful of people. The Result: Questions the subjects were asked were like the puzzle shown here: All they had to do was say which line on the right matched the one on the left. Yet, sadly, 32 percent of subjects would answer incorrectly if they saw that three others in the classroom gave the same wrong answer. "Wait, you're right! C.

10 Fundamental Pros and Cons of Eugenics | ConnectUS Eugenics is the belief that selecting the mating partners and controlling the offspring improves the quality of human life. According to history, it dates back to Ancient Greece, but after its adaption by the Nazis, eugenics gained much criticism, scrutiny and disapproval. Some say that eugenics is all-negative because selection is always determined by who is in power, and that it violates every human being’s right to reproduction. Nevertheless, we will soon find out that eugenics does have its own benefits, and knowing the pros and cons of eugenics helps us understand it better. List of Pros of Eugenics 1. 2. 3. 4. 5. List of Cons of Eugenics 1. 2. 3. 4. 5. Eugenics does have some benefits, but as an infant technology, it is has risks and prone to costly mistakes at the expense of actual humans.

The Five Biggest Threats To Human Existence In the daily hubbub of current “crises” facing humanity, we forget about the many generations we hope are yet to come. Not those who will live 200 years from now, but 1,000 or 10,000 years from now. I use the word “hope” because we face risks, called existential risks, that threaten to wipe out humanity. These risks are not just for big disasters, but for the disasters that could end history. Not everyone has ignored the long future though. But had these pioneers or futurologists not thought about humanity’s future, it would not have changed the outcome. We are in a more privileged position today. Future imperfect Yet, these risks remain understudied. If humanity becomes extinct, at the very least the loss is equivalent to the loss of all living individuals and the frustration of their goals. With that in mind, I have selected what I consider the five biggest threats to humanity’s existence. 1. The Cuban Missile crisis was very close to turning nuclear. 2. eneas, CC BY 3. 4. gi, CC BY-SA

'Designer babies' debate should start, scientists say Image copyright SPL Rapid progress in genetics is making "designer babies" more likely and society needs to be prepared, leading scientists have told the BBC. Dr Tony Perry, a pioneer in cloning, has announced precise DNA editing at the moment of conception in mice. He said huge advances in the past two years meant "designer babies" were no longer HG Wells territory. Other leading scientists and bioethicists argue it is time for a serious public debate on the issue. Designer babies - genetically modified for beauty, intelligence or to be free of disease - have long been a topic of science fiction. Dr Perry, who was part of the teams to clone the first mice and pigs, said the prospect was still fiction, but science was rapidly catching up to make elements of it possible. In the journal Scientific Reports, he details precisely editing the genome of mice at the point DNA from the sperm and egg come together. "It is approaching 100% efficiency already, it's a case of 'you shoot you score'." New era