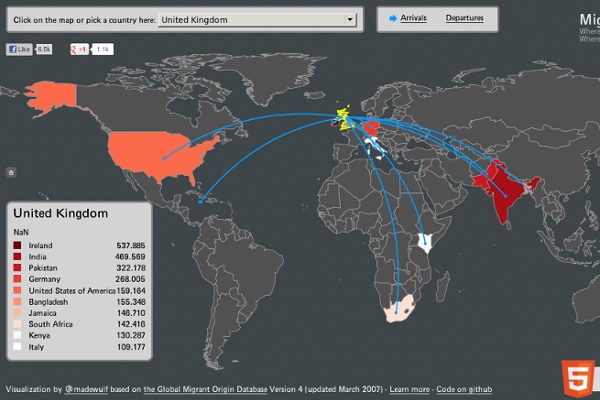 Polymaps Interactive - NatGeoMag Population The World of Seven Billion The map shows population density; the brightest points are the highest densities. Each country is colored according to its average annual gross national income per capita, using categories established by the World Bank (see key below). Some nations— like economic powerhouses China and India—have an especially wide range of incomes. Choropleth Choropleth maps visualize geographic distributions using a color encoding. This example shows U.S. unemployment density by county, as of 2009. An Albers equal-area projection preserves the accuracy of the representation. Choropleth design invented by Charles Dupin . Colors by Cynthia Brewer . Data from the Bureau of Labor Statistics , by way of Nathan Yau . Source Code

How Did We Get to 7 Billion People So Fast? I love the cool infographic video from NPR. 7 Billion: How Did We Get So Big So Fast? is a video that uses colored liquids to visualize the population rates of the differen continents. High birth rates mean fast liquid pouring in, slower death rates slow down the liquid dripping out of the bottom. The U.N. estimates that the world’s population will pass the 7 billion mark on Monday. Found on FlowingData

vis4.net 7B people & you: What's your number? Sources: All population data are based on estimates by the UN Population Division and all calculations provided by the UN Population Fund. The remaining data are from other sections of the UN, the Global Footprint Network and the International Telecommunications Union. Want to find out more? Visit the UN Population Fund's detailed population calculator, 7 billion and me. Notes on the data: Only birth dates after 1910 can be accommodated and only countries with populations of more than 100,000 people are included. Three country groupings - developed, developing and least developed - featured in the conclusions are those referenced by the UN for assessing the Millennium Development Goals. Read the answers to frequently asked questions here.

InstantAtlas Dencity Dencity maps population density using circles of various size and hue. Larger, darker circles show areas with fewer people, while smaller, brighter circles highlight crowded cities. Representing denser areas with smaller circles results in additional geographic detail where there are more people, while sparsely populated areas are more vaguely defined. Read more about how Dencity was made. Visual Gadgets American migration map Overhauling his migration map from last year, Jon Bruner uses five year's worth of IRS data to map county migration in America: Each move had its own motivations, but in aggregate they ­reflect the geographical marketplace during the boom and bust of the last decade: Migrants flock to Las Vegas in 2005 in search of cheap, luxurious housing, then flee in 2009 as the city’s economy collapses; Miami beckons retirees from the North but offers little to its working-age residents, who leave for the West. Even fast-growing boomtowns like Charlotte, N.C., lose residents to their outlying counties as the demand for exurban tract-housing pushes workers ever outward. Compared to last year's map, this one is much improved. Update: Jon also explains how he built this map sans-Flash on his own blog.

Javascript and SVG: Back to the Future Happy New Year! One of the things I am looking forward to in 2012 is yet more improvements in the no-longer-humble web browser. The move towards ‘web apps’ has made browser manufacturers focus on the speed at which users can interact with a page (usually this is done via javascript). One of the reasons Flash has been so popular in recent years has been its better performance when dealing with complex animated/interactive content. Here at ONS’ Data Visualisation Centre, we loved SVG a decade ago – so we’re really looking forward to re-working some of our existing Flash-based graphics back towards HTML5/SVG in the coming year – I’ll try and reflect on some of the experiences of doing this in a later post. Like this: Like Loading... Bio.Diaspora: Visualising interactions between populations and travel I want to share some impressive work I’ve recently come across from a Toronto-based project/group called Bio.Diaspora. Last week the team was featured in the Lancet Infectious Disease Journal as part of a special report on Mass Gatherings and Health. The report focused specifically on the potential health risks posed by the mass gathering and transit of people attending events like the Olympic Games. You can find out more information about this story on the BBC and CBC, as well as through watching the animated visualisation below. I got in touch with David Kossowsky, a GIS mapper, cartographer and graphic designer, to find out more about the work of Bio.Diaspora and some of the visualisations they have been working on. This image shows a visualisation of the global airline transportation network consisting of all commercial flights worldwide. This image shows a similar visualisation with Toronto’s flight paths isolated and highlighted: So how were these visualisations created?