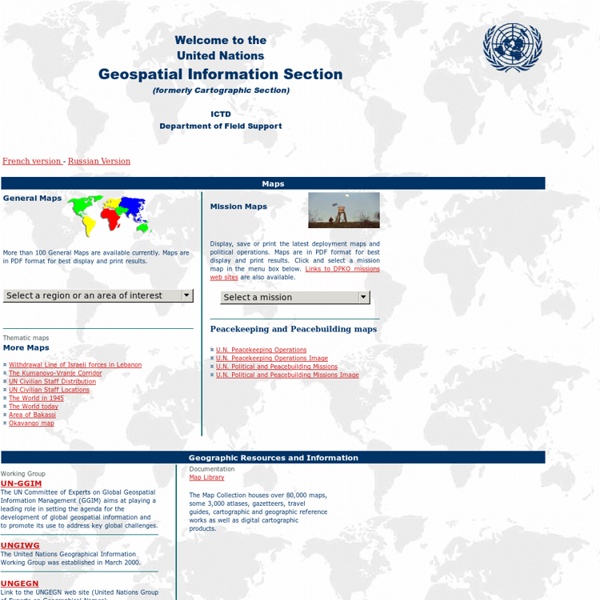 LINKS TO OTHER WEB SITES: This is the United Nations Geospatial Information Section web site. Links to other sites are provided for information only. The inclusion of these links and their content does not imply official endorsement or approval whatsoever by the United Nations. DESIGNATIONS USED: The depiction and use of boundaries, geographic names and related data shown on maps and included in lists, tables, documents, and databases on this web site are not warranted to be error free nor do they necessarily imply official endorsement or acceptance by the United Nations. COPYRIGHT NOTICE: Unless otherwise noted, the maps included on this web site are produced by the Geospatial Information Section and are copyrighted by the United Nations. Reproduction of any part without the permission of the copyright owner is unlawful.

Map: Vaccine-Preventable Outbreaks This interactive map visually plots global outbreaks of measles, mumps, whooping cough, polio, rubella, and other diseases that are easily preventable by inexpensive and effective vaccines. Red triangles indicate attacks on vaccinators and healthcare workers, as well as announcements from both governments and non-state actors that have had an impact—either positive or negative—on the successful implementation of vaccination programs. The Global Health Program at the Council on Foreign Relations has been tracking reports by news media, governments, and the global health community on these outbreaks since the fall of 2008. This project aims to promote awareness of a global health problem that is easily preventable, and examine the factors that threaten the success of eradicating preventable illnesses such as polio. Learn more about Global Health. On to the Vaccine-Preventable Outbreaks map

Global Health, Local Knowledge Marker Color Marker color reflects the noteworthiness of events at a particular location during a given time window. An event's degree of noteworthiness is based on the significance rating of the alert provided by HealthMap users. In the absence of user ratings, the system assigns a composite score based on the disease importance and the news volume associated with the alert. If a location's marker has multiple alerts, the color associated with the most prominent alert is used. Marker Size Developing Focus and Flow For Study Success Several months ago, my dear neice Kaylin was feeling overwhelmed with a lot of school assignments, tests, essays, papers, and book reports. I sent her the following which she said greatly helped her and others that she shared it with. If you are frustrated with school work (or tasks at work), I hope the following tips will give you help. These principles are useful at work, managing a home, and even Bible study. (Hat tip to David Allen and Getting Things Done book for teaching me many of these lessons)

Common Map Projections Map projections are one of the fundamental concepts of geography and cartography. Selecting the right map projection is one of the important first considerations for accurate GIS analysis. The problem with projections (and the reason why there are so many types) is that it is very difficult to represent the curved 3D surface of the Earth on a flat 2D surface of a map; some distortion is bound to occur (read about what is a map projection). Many geographers through the ages have tried to solve the distortion problem through various map projections.

What single quality predicts a good doctor? What is the most important characteristic a medical student should have? Intelligence? Empathy? The Most Useful Productivity Tool in a Browser June 27, 2012 Have you ever done a websearch to find a fact or resource and ended up in a big, long webpage? It happens to me all the time. Map projection More generally, the surfaces of planetary bodies can be mapped even if they are too irregular to be modeled well with a sphere or ellipsoid; see below. Even more generally, projections are the subject of several pure mathematical fields, including differential geometry and projective geometry. However "map projection" refers specifically to a cartographic projection. Background[edit] Maps can be more useful than globes in many situations: they are more compact and easier to store; they readily accommodate an enormous range of scales; they are viewed easily on computer displays; they can facilitate measuring properties of the terrain being mapped; they can show larger portions of the Earth's surface at once; and they are cheaper to produce and transport. These useful traits of maps motivate the development of map projections.

10 Proven Strategies of High-Performance Teams [INFOGRAPHIC] Ronald Brown is a successful startup CEO with an extensive background in technology and consumer marketing. His new book, Anticipate. The Architecture of Small Team Innovation and Product Success is available via iTunes, Amazon, Barnes & Noble, and Kobo. Who drives product innovation? Your Presentation: If You Change It, They Will Listen One fine day in January of 2009, on a plane ride from San Francisco to Las Vegas with two of my closest friends, I learned how to deploy a life vest. It was not my first time hearing an airline safety speech– by then I’d already flown over a dozen times. It was, however, my first experience with Virgin America. Rather than having two flight attendants battle it out for Most Lackluster Performance Under Fluorescent Lighting, Virgin broadcasts a safety video to its passengers via a touch-screen entertainment system installed in each headrest. The video is illustrated with what looks like hand-sketched cartoons, and it uses both humor and good ol’ common sense to communicate vital information.

Agile Business Begins with Agile Culture I kid you not, this conversation took place in the Mindjet kitchen this afternoon: Person 1: [Notices Person 2 looking at tins of day-old Chinese food on counter] Can I interest you in some day-old chow mein?Person 2: I don’t know, it looks pretty rubbery…Person 1: No way, you just have to put the right spin on it.Person 3: It’s agile chow mein![All three burst into extra-geeky laughter] Jokes aside, agility is way important these days. I know I’ve recently talked a lot about lessons learned from Baratunde Thurston, but in all seriousness, that guy (Director of Digital for The Onion) has a pretty solid notion of how technology is moving and changing business and people.

KeyRocket - A simple way to master keyboard shortcuts. Quick Example Sally installs KeyRocket and starts using Word. KeyRocket notices that Sally habitually uses the mouse to center align her text and suggests that she use a shortcut instead (in this case, Ctrl + E). 3 Barriers to Creativity Here’s a scenario we’ve all been in far too many times to count: it’s late, you’ve been asked by a superior to come up with some ideas to help kick start product sales. How do you pull it off? We’ve all suffered from creativity barriers. Mental State Called Flow A number of sources, most recently ProgrammingOutsideTheCube and the RingerTape page, say that many folk find it takes time to get into a state where work flows. Do you plan to get into flow, does it come upon you more as a kind of inspiration, or is it not necessary for you? Do you use tactics to improve your team's ability to flow? Which particular events disrupt flow the most, and how do you solve them? For me, flow requires both inspiration and expiration, if that makes sense. I need to get out into green places or seasides to drink in what's around me, and then I can breathe that vitality back into my work.