40 more maps that explain the world 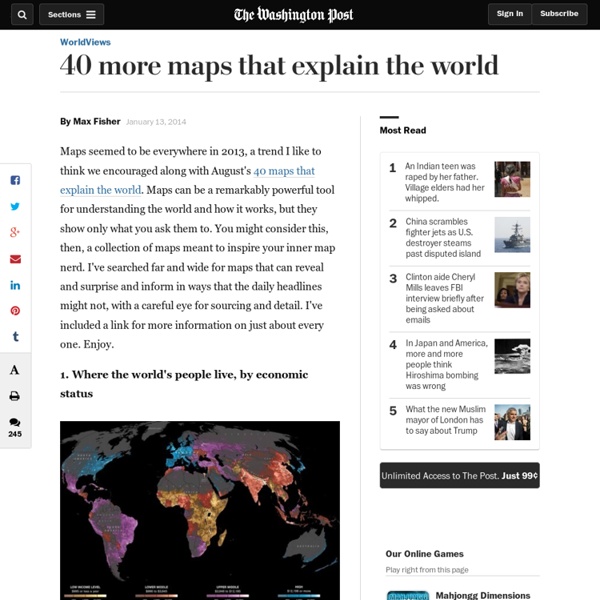 Maps seemed to be everywhere in 2013, a trend I like to think we encouraged along with August's 40 maps that explain the world. Maps can be a remarkably powerful tool for understanding the world and how it works, but they show only what you ask them to. You might consider this, then, a collection of maps meant to inspire your inner map nerd. I've searched far and wide for maps that can reveal and surprise and inform in ways that the daily headlines might not, with a careful eye for sourcing and detail. I've included a link for more information on just about every one. 1. Data source: Oak Ridge National Laboratory, World Bank. Those dots represent people: the brighter the dot, the more people. 2. Click to enlarge. Human beings first left Africa about 60,000 years ago in a series of waves that peopled the globe. 3. (Wikimedia commons) The Mongol conquests are difficult to fathom. 4. Click to enlarge. This map shows the Spanish and Portuguese empires at their height. 5. 6. 7. 8. 9. 10. Related:  Map Skills & Geographic Reasoning • Maps

Magnificent Maps: Cartography as Power, Propaganda, and Art by Maria Popova What the feats of Marco Polo have to do with medieval political propaganda and the history of tea. Three of my great fascinations — cartography as art, propaganda design, and antique maps — converge in Magnificent Maps: Power, Propaganda and Art. The lavish tome collects cartographic curiosities from the golden age of display maps — the period between 1450 and 1800, when maps were as much a practical tool for navigation as they were works of art and affirmations of cultural hegemony or social status — culled from the formidable collection of the British Library. Peter Barber, who heads the map collections at the British Library, and Tom Harper, BL’s Curator of Antiquarian Mapping, contextualize the maps with detailed descriptions of how and where they were used, from schoolrooms to bedchambers, and explore their parallel role as art and propaganda. Fra Mauro World Map, 1450 The Americas by Diego Gutiérrez, 1562 Psalter World Map (mappa mundi), 1265 Donating = Loving

Exploring How GIS Can Be Used to Manage Facilities and Plan Campuses There are dozens of applications as to how GIS can be used to improve the public sector, everything from improving service delivery, gaining efficiency, and monitoring and assessing government programs. One emerging area of GIS is the use of GIS to help plan and optimize facilities. Public sector organizations operate and maintain thousands of facilities, and with GIS, facility managers can gain new insights throughout the entire lifecycle of a facility. With GIS managers can make smart decisions on site selections, optimizing space and improve business continuity. Post Highlights Be sure to view GovLoop's recent interview with Esri President Jack DangermondGIS has been used to help manage the lifecycle of facilities, from site selection to removalThe University of Rochester uses GIS to manage maintenance requests to avoid service disruptions Traditionally, GIS was used to measure the environmental impact of a facility within the community. Want More GovLoop Content?

8 Maps That Will Change the Way You Look at Africa | Vicky Ramirez 1. Where the world's 7 billion live This National Geographic map illustrates where and how the world lives. Not surprisingly, the areas with the highest income levels have greater life expectancy (77 for males, 83 for females compared to 58 and 60 in low income levels), access to improved sanitation (99 percent compared to 35 percent), among other human security factors. 2. Using data from the World Bank Development Indicators, this map from Global Finance shows us what the world will look like in 2015 if it were inflated to the size of their economic wealth. 3. We know the African continent is pretty big. 4. To quote Rajiv Narayan from Upworthy, "Sure 12 Years a Slave won an Oscar, but we all deserve to win Best Actor for pretending slavery doesn't exist anymore." The map above, issued by the Walk Free Foundation stains the world map with reds representing concentrated slavery presence and lighter yellows for lower concentrations. 5. 6. 7. 8.

Interactive map of human genetic history revealed A global map detailing the genetic histories of 95 different populations across the world, showing likely genetic impacts of European colonialism, the Arab slave trade, the Mongol Empire and European traders near the Silk Road mixing with people in China, has been revealed for the first time. The interactive map, produced by researchers from Oxford University and UCL, details the histories of genetic mixing between each of the 95 populations across Europe, Africa, Asia and South America spanning the last four millennia. The study, published this week in Science, simultaneously identifies, dates and characterises genetic mixing between populations. To do this, the researchers developed sophisticated statistical methods to analyse the DNA of 1490 individuals in 95 populations around the world. The work was chiefly funded by the Wellcome Trust and Royal Society. "Because our approach uses only genetic data, it provides information independent from other sources. Media contact: Clare Ryan

Instituto Ciência Hoje — Viagem no tempo on-line e de graça Mapas não são... Students Map Real-World Issues with (Free) Geospatial Tools Imagine being an emergency responder in a small town that hasn't mapped its fire hydrants, labeled rural roads with street signs, or identified evacuation points in the event of natural disaster. Now imagine being part of a high school team that addresses those issues by thinking critically and using sophisticated geospatial tools to communicate findings. Until recently, only a small number of schools have had access to the high-powered geographical information system (GIS) software that enables detailed, layered mapping and analysis of data. Thanks to a recent $1 billion pledge from software developer Esri, free access to cloud-based mapping software is coming to 100,000 K-12 schools across the country. The donation of ArcGIS Online, the same software that governments and businesses use, has been pledged through ConnectED, a White House initiative to improve education in the STEM fields. Pioneers Lead the Way

Mapping Landforms 1. Discuss different kinds of landforms. Project the Landforms map and invite volunteers to point to the different landforms, name them, and read the descriptions. Show the photo gallery with examples of these landforms around the world. Ask students to describe experiences they have had of being near any of these landforms, or seeing them in a movie, in photos, or on a map. Ask: Which landform is the highest? You can project your state map using the National Geographic MapMaker Interactive and find locations of the different landforms students describe. 2. Project the Landform Map of Virginia. Point to different colors on the map, and have students use the map key to name the type of landform.Find the Piedmont. 3. Project the Landform Map of the United States. What are the highest mountains, marked on this map, in different areas of the country? The plains are where most country’s agriculture is. 4. 5. Have a whole class discussion about the landform map.

The 500 Year Old Map that Shatters the Official History of the Human Race Buck Rogers | If conventional wisdom on the history of the human race is correct, then human civilization is not old enough, nor was it advanced enough, to account for many of the mysterious monolithic and archeological sites around the world. Places like Gobekli Tepe in Turkey, the Bosnian Pyramids, and Adam’s Calendar in South Africa, beg the same question: if human civilization is supposedly not old enough to have created all of these sites, then who, or what, had the capacity to create so many elaborate structures around the globe? It is clear that our understanding of our own history is incomplete, and there is plenty of credible evidence pointing to the existence of intelligent and civilized cultures on Earth long before the first human cultures emerged from the Middle East around 4000BC. Mapmaking is a complex and civilized task, thought to have emerged around 1000BC with the Babylonian clay tablets. The ice-cap in this region is now about a mile thick. Harold Z. About the Author

Map Overlays Comparing Size All maps face the challenge of making the globe appear to scale in two dimensions. Most, like the traditional Mercator projection, keep either size or shape consistent — not both — which skews our perception of continents and countries one way or the other. But when you compare square mileage, a whole new world appears. Mike Nudelman/Business Insider Cartography: The true true size of Africa LAST month Kai Krause, a computer-graphics guru, caused a stir with a map entitled "The True Size of Africa", which showed the outlines of other countries crammed into the outline of the African continent. His aim was to make "a small contribution in the fight against rampant Immappancy"—in particular, the fact that most people do not realise how much the ubiquitous Mercator projection distorts the relative sizes of countries. A sphere cannot be represented on a flat plane without distortion, which means all map projections distort in one way or another. Some projections show areas accurately but distort distances or scales, for example; others preserve the shapes of countries but misrepresent their areas. You can read all the gory details on Wikipedia. Gerardus Mercator's projection, published in 1569, was immediately useful because it depicts a line of constant bearing as a straight line, which is handy for marine navigation.