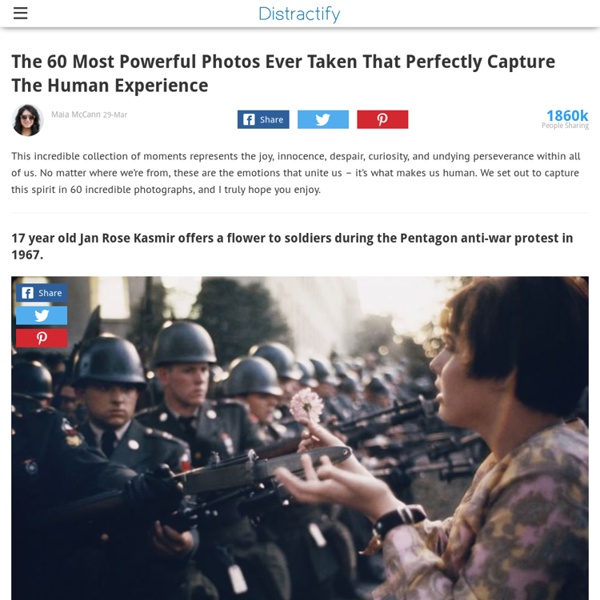 This incredible collection of moments represents the joy, innocence, despair, curiosity, and undying perseverance within all of us. No matter where we’re from, these are the emotions that unite us – it’s what makes us human. We set out to capture this spirit in 60 incredible photographs, and I truly hope you enjoy. Creating this list out of thousands of potential photos was a daunting, yet rewarding experience for me. I hope you loved it too (and if you did, share it with others below). Thanks for visiting us today!

30+ Crazy Photographers Who Will Do ANYTHING For The Perfect Shot Getting the angle and perspective for a photo just right can sometimes be very tricky, but these crazy photographers don't mind – when it comes to taking the perfect shot, they will do whatever it takes. The acts of devotion to their craft that some of the world's best photographers perform can be truly outstanding. Wildlife photographers have spent weeks camped out in the wild, allowing animals to get accustomed to their presence so that they can get the rare or intimate glimpses at their lives that others only dream of. Show 34 more Add Image

A closer look at communities thriving in unexpected places In Caracas, the capital of Venezuela, nearly 70 percent of the population lives in slums that appear to drape like silk over every hill of the city. Iwan Baan: Ingenious homes in unexpected placesIwan Baan is not as interested in what architects build as he is in the beautiful ways that people appropriate the spaces once the planners are gone. In today’s talk, Baan — whose breathtaking image of lower Manhattan after Hurricane Sandy hangs on at least one of our walls — shows incredible images from communities thriving in ways that seem quite opposite to the uniformity of suburbs. First, Baan takes us to Chandigarh, India, where people inhabit buildings created by modernist architects Le Corbusier in very different ways than expected. Then, Baan takes us to Caracas, Venezuela, where an abandoned 45-story building has become a miniature city. Baan’s talk will have you marveling at human ingenuity.

30 Beautiful Doors That Seem To Lead To Other Worlds Most doors are hopelessly mundane, but they don’t have to be; they can also serve as meaningful symbols of portals between worlds or between different aspects of our lives. When we set out to create a list of beautiful doors around the world, we were surprised to find just how many truly amazing doors there are out there that have been decorated with beautiful craftsmanship and artwork. The door is probably the single part of a building’s exterior that people will interact most frequently with, so if you want a building to look impressive up close, there’s probably no better way to do this than by having a beautiful door. Burano, Italy

Once Upon A Blog...: When You Wish Upon A Character... (How Design in Disney Movies Affects the Way Fairy Tales Are Perceived & Why We Should Care) Note: This post is very image heavy and I've had a devil of a time trying to get the images to stick where I put them. As I'm now out of time, I want to apologize in advance if there are any weird formatting issues through the post! For me, I know I just have to catch a glimpse of certain H.J. Ford drawings and I'm in love with that tale all over again. The same goes for Rackham and many other illustrator's fairy tale work. Disney images, however, aren't as subtle as sitting in a book waiting for us to open it again. 33 Graphs That Reveal Painfully True Facts About Everyday Life EmailEmail Danish writer/artist duo Mikael Wulff and Anders Morgenthaler create comedy cartoons and graphs depicting the everyday struggles, irritations, and insights of their fellow Westerners. Official-looking graphs show unofficial statistics from our daily lives that are at once unexpected and glaringly obvious.

Eight Norwegian Photographers You Need to Follow The Norwegian Journal of Photography (NJP) has released the latest issue of its biennial survey of the Scandinavian country’s contemporary documentary photography scene, showcasing the work of eight photographers. The publishers — photographers and photo editors Rune Eraker, Laara Matsen and Espen Rasmussen — combed through close to 100 applications and submissions to arrive at its final list of eight photographers, using funding from the Fritt Ord Foundation, a non-profit devoted to freedom of expression, to produce the high-quality book. “We look for strong voices,” Espen tells TIME, “and we also look for photographers who challenge the term ‘documentary photography’. Do they have a style, something to tell us, do they surprise us or challenge us? Do they create any feelings for us as a viewer? Once chosen, the NJP works with these photographers to craft and edit their long term projects, and to find financial support.

The World's Population Might Not Be About Numbers After All In a world with limited resources, we have to conserve what we have and reduce the number of people on the planet—at least, that’s what most of us believe. But is this true? That’s the provocative question raised by the new documentary Misconception. The 15 Most Beautiful Flowers In The World Canna Cannas not only feature pretty blossoms, but also beautiful leaves (often likened to that of the banana plant) that come in a variety of stunning colors. Popularized in Victorian times, Cannas are popular garden plants. Cherry Blossom

Terry Cat / How to make Soft stuffed cat of towel. It's washable. 17cm in height. Advertisements Materials 33 Awesome Inspirations for Your Dream Home Each of us probably have an idea about what our individual dream homes would look like. Maybe your dream home would have a hammock ... or maybe an indoor slide that leads outside into a pool filled with Jell-O. You can have whatever you want, after all, it's YOUR dream home.

The Chinese Art of the Crowd After viewing news photographs from China for years, one of my favorite visual themes is "large crowd formations." Whether the subject is military parades or world-record attempts, mass exercises or enormous performances, the images are frequently remarkable. The masses of people can look beautiful or intimidating, projecting a sense of strength and abundance.