The Mint countries: Next economic giants? 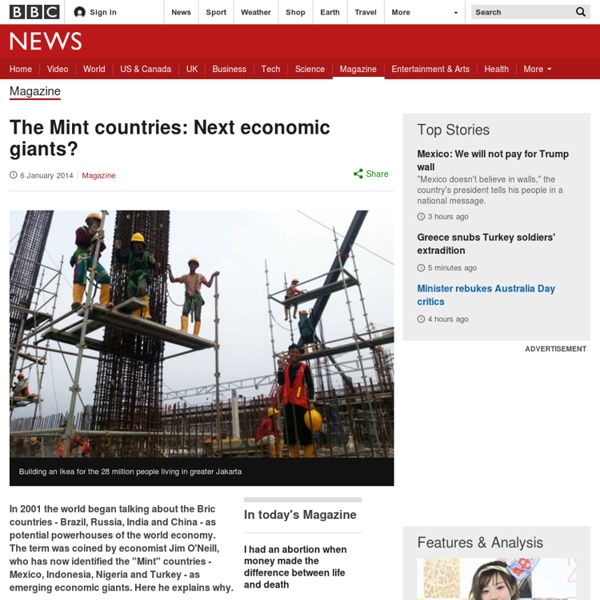 In 2001 the world began talking about the Bric countries - Brazil, Russia, India and China - as potential powerhouses of the world economy. The term was coined by economist Jim O'Neill, who has now identified the "Mint" countries - Mexico, Indonesia, Nigeria and Turkey - as emerging economic giants. Here he explains why. So what is it about the so-called Mint countries that makes them so special? A friend who has followed the Bric story noted sardonically that they are probably "fresher" than the Brics. This is the envy of many developed countries but also two of the Bric countries, China and Russia. Something else three of them share, which Mexican Foreign Minister Jose Antonio Meade Kuribrena pointed out to me, is that they all have geographical positions that should be an advantage as patterns of world trade change. For example, Mexico is next door to the US, but also Latin America. And as we all know, Turkey is in both the West and East. Indonesia, I am less sure about. He's right.

Bye-bye Bric, hello Mint — are Mexico, Indonesia, Nigeria and Turkey really the new boom economies? Plus: Why there's so little space on your local war memorial for the names of World War II heroes New year new ideas as we woke up on Monday morning to find ourselves in Lagos with Evan Davies trying to convince us that Nigeria really is undergoing an economic earthquake. It’s part of a week-long campaign by Radio 4 to make us believe that the next economic leaders among world nations will be Mexico, Indonesia, Nigeria, Turkey. These new Mint countries are destined, we are told, to take over from the Bric countries, now deemed passé after just a decade in the limelight generated by the economist fashionistas. It’s stimulating stuff for this hibernating time of year. Evan was joined by Nkem Ifejika from the World Service in his pop-up reports for the Today programme as they toured factories, the nascent Nollywood film industry, the markets of Lagos and the Eko Atlantic project, which is creating a huge new city out of reclaimed land from the ocean.

Jim O'Neill Presents The MINT Economies Former Goldman Sachs economist Jim O'Neill is the one who popularized the term "BRICs" in reference to the group of emerging-market economies made up of Brazil, Russia, India, and China. This year, however, the fortunes of those economies have taken a turn for the worse for various reasons, and many investors are abandoning the idea that they will be able to continue the rapid growth that has characterized the past several years. Much investor attention has therefore shifted from emerging markets to "frontier markets," a classification made up of economies smaller than those of the BRICs. In a new column for Bloomberg View, O'Neill presents a new potential investment destination: the "MINT" economies (emphasis added): I spent last week in Indonesia, working on a series for BBC Radio about four of the world’s most populous non-BRIC emerging economies. Policy makers and thinkers in the MINT countries have often asked me why I left them out of that first classification.

BRIC-layer makes MINT | Global Investing Former Goldman Sachs economist Jim O’Neill, deviser of the BRIC acronym uniting the emerging market giants of Brazil, Russia, India and China, has coined a new term – MINT. In a series of BBC radio programmes starting today, O’Neill looks at the “next economic giants” of Mexico, Indonesia, Nigeria and Turkey. It’s a break-out of four of the countries from his previously-coined Next-11, which also included Bangladesh, Egypt, Iran, Pakistan, Philippines, South Korea and Vietnam. O’Neill, who retired last year from his role as chairman of Goldman Sachs Asset Management (after spending too much time looking at Reuters), says on the BBC website that the MINT economies benefit from favourable geographical locations and, in some cases, reform-minded politicians: If Mexico, Indonesia, Nigeria and Turkey get their act together, some of them could match Chinese-style double-digit (growth) rates between 2003 and 2008. But tracking MINT may not be a financial success.

Hamish McRae: From the Brics to the Mints, is it time to take a new look at the emerging markets' success story? - Hamish McRae - Business Comment Except that it didn't turn out like that. If you take as your benchmark the performance of equities, last year was a bit of a disaster for this strategy. As you can see from the graph, 2013 was the year when emerging markets moved sideways while developed markets shot ahead. Some of its previous enthusiasts think so. Others broadly agree. What should we make of all this? Another is that the developed world, southern Europe apart, is performing rather better than it was and is producing good returns for investors. Finally, you have to make a distinction between growth and the performance of investments. My own reaction to all this is to note that emerging economies are, well, emerging. We have a growth disadvantage in the developed world but we have a governance advantage. Historically this has led to higher overall returns in the emerging world. On a shorter time horizon, say three years, this may not be the case.

Kickstarter economics 101: How much should you charge for a Backer Reward? | VentureBeat | Business | by Haje Jan Kamps I spend quite a bit of time supporting, looking at (and running my own) Kickstarter campaigns. One of the things I often notice is that some people don’t really think about what their campaign is for: funding their project. I’ve seen people who have promised hand-painted postcards for their Kickstarter backers at $15. The problem with this is that the postcards weren’t core to the Kickstarter project, so in practice, every second spent on those postcards was a second not spent on the main project. So what would happen if this person received 200 backers for that award level? Except Kickstarter takes 5 percent, and so does the payment processor, so we’re down to $2,700 before the money arrives. Then the work begins And that’s just the start. In addition, I know this person is a bit of a perfectionist. So the entire postcards project would cause nearly a month worth of work, paid at a reasonable $19.33 per hour. Is it worth it? Good luck! Powered by VBProfiles

Millennial Entrepreneurs Harness Power of Vintage Train Travel Two dozen young entrepreneurs spilled off a train exhausted after their journey and dragged their luggage toward Washington, D.C.’s bustling Union Station. The Millennial Trains Project participants had just spent a week and a half chugging cross-country in vintage train cars as part of what amounted to a moving start-up incubator. Each young entrepreneur had an idea for a project that could have broad impact but be implemented at the local level and they helped each other breath life into those ideas as they rolled across the country. The group disembarked from the train on Saturday as if coming off an incomprehensible high. It might sound new-agey or random, but it’s not entirely novel. "It was like getting hooked up to an IV of young entrepreneurs," he told Fusion in June. And the inaugural U.S. trip proved to be the same. It had been “surreal,” he said, after so many months of planning to finally sit back and watch his brainchild come to life.

DataWind’s Aakash 2 and Ubislate Are Cheap Tablets for the Developing World A devout Sikh, Suneet Singh Tuli, 44, has found his own way to live by his religion’s central belief of sarbat da bhala, or “may everyone be blessed.” He wants everyone in India to be on the Internet. To that end, Tuli’s London company, DataWind, is building very inexpensive tablet computers, which it assembles in China or with the help of support staff at its India offices. The idea, Tuli says, is to pair cheap tablets with ad-supported wireless service as a way to bridge the digital divide between poor and rich countries. DataWind began winning attention last year when it struck a deal to supply India’s government with 100,000 of its Aakash 2 tablets, for roughly $40 each, by this March 31. Tuli’s company is not a charity. You’ve said that you never intended to be in the hardware business. We think that hardware is dead. So tablets should be literally disposable, like USB flash drives? What new businesses will ultracheap tablets lead to in the developing world?

Nanoscribe claims world’s fastest commercially available nano-3D printer title The Photonic Professional GT - the world’s fastest commercially available 3D printer for micro- and nanostructures (Photo: Nanoscribe) Image Gallery (3 images) Shoes, robots, houses and prosthetic hands, 3D printing has already gone well beyond the bounds of model making, and biotechnology is another of the new frontiers where the technology is set to make a huge impact. Nanoscribe GmbH, a spin-off of the Karlsruhe Institute of Technology (KIT), is pushing the boundaries of this space with the release of what's claimed to be the world’s fastest and highest resolution commercially available 3D printer of micro- and nanostructures – the Photonic Professional GT. The Photonic Professional GT uses a 3D laser lithography system developed by Nanoscribe that can handle data transfer rates of more than 5 terabits per second. According to Nanoscribe, the scanning field is limited physically to "a few 100 µm" (µm = micrometer = one-thousandth of a millimeter). About the Author

Smart Education: How Lynda.com Hit $70M In Revenue Without A Penny From Investors As Ned Flanders would say, education in the U.S. is in “a dilly of a pickle.” At the risk of sounding like a broken record, the cost of education has become unsustainable. Student loan debt is over $1 trillion, unemployment remains high for the recently graduated, and non-traditional students — older people, single mothers, workers looking to re-train — are returning to academia and learning programs in droves, putting even more competitive pressure on already-scant on-site resources. Higher ed institutions struggle with the cost of expanding to meet demand. Luckily, a number of startups are tackling the problem, which, along with the maturation of online content distribution channels, are helping to lower the cost of higher, primary, and continuing education — both making it easier for teachers to do what they do best as well as transforming learning into something that’s more engaging and personalized for students. For more on Lynda.com, check them out at home here.