Peoplemovin - A visualization of migration flows 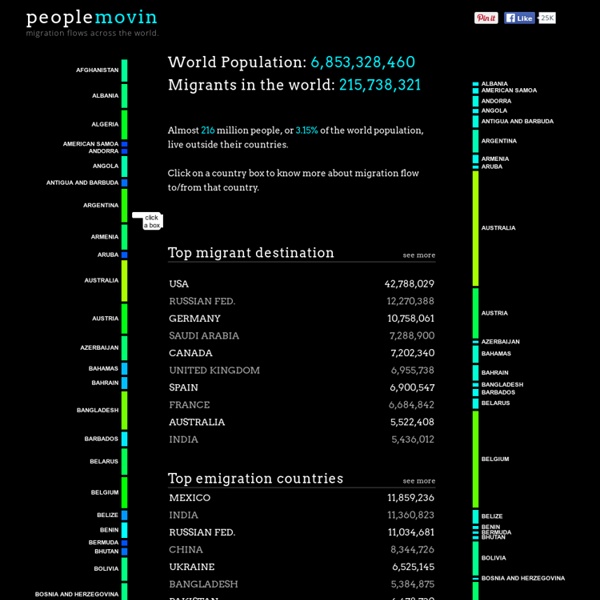 15 Stunning Examples of Data Visualization Data Visualization is a method of presenting information in a graphical form. Good data visualization should appear as if it is a work of art. This intrigues the viewer and draws them in so that they can further investigate the data and info that the graphic represents. In this post there are 15 stunning examples of Data Visualization that are true works of art. Click on the title or image for a larger view of each visualization. The Strengths of Nations Here’s an image that discusses the variations in how different nations pursue science. Madrid.Citymurmur CityMurmur tries to understand and visualize how media attention reshapes the urban space and city. Genome Jules & Jim This visual represents the relationship between characters in the movie Jules & Jim. One Week of the Guardian This is one day in a series that takes the news from one week of the Guardian newspaper, and visually represents it as a series of static visualisations. One Week of the Guardian Leisure & Poverty Stock Data Related Posts

A closer look at communities thriving in unexpected places In Caracas, the capital of Venezuela, nearly 70 percent of the population lives in slums that appear to drape like silk over every hill of the city. Iwan Baan: Ingenious homes in unexpected placesIwan Baan is not as interested in what architects build as he is in the beautiful ways that people appropriate the spaces once the planners are gone. In today’s talk, Baan — whose breathtaking image of lower Manhattan after Hurricane Sandy hangs on at least one of our walls — shows incredible images from communities thriving in ways that seem quite opposite to the uniformity of suburbs. Baan’s talk will have you marveling at human ingenuity. In the center of Caracas is the Torre David, a 45-story unfinished office tower that was in the midst of construction until the developer died in 1993, followed by the crash of the Venezuelan economy the following year. With no lifts or escalators, the tower is essentially a forty-five-story walk up. In Makoko, forced evictions are a daily reality.

The Historical Evolution of Europe's Borders The movie "Epic time-lapse map of Europe" fast forwards a map from the year 1000 AD until 2003 to reveal the dynamic nature of Europe's borders, alliances, unions, territories, and occupied lands. An alternative movie takes a bit longer, but contains useful textual annotations such as the actual year that is shown and the events that occurred. The movie was made with "Centennia Historical Atlas" by Centennia Software. Watch the movies below. Via @tillnm.

The World's Population Might Not Be About Numbers After All In a world with limited resources, we have to conserve what we have and reduce the number of people on the planet—at least, that’s what most of us believe. But is this true? That’s the provocative question raised by the new documentary Misconception. The film, which premieres at the Tribeca Film Festival on April 20, gives us a personal look at the social and political ramifications of population growth. Oscar-winning director Jessica Yu (best documentary short subject) began exploring the issue of population growth while making her previous documentary, Last Call at the Oasis, which is about the global water crisis. Misconception challenges our assumptions through the stories of three everyday people: Bao, a Chinese bachelor who’s facing pressure from his family to marry; Denise, a Canadian pro-life activist; and Gladys, a Kampala, Uganda–based journalist who works with abandoned children. At 29, Bao is under the gun to tie the knot.

OECD – Your Better Life Index Average personal index for Germany, men, 15–24 How’s life? There is more to life than the cold numbers of GDP and economic statistics – This Index allows you to compare well-being across countries, based on 11 topics the OECD has identified as essential, in the areas of material living conditions and quality of life. Download executive summary Download the index data Learn more about the index Better Life BlogArchive Happiness pays For World Happiness Day our guest author suggests that money can't buy you happiness but happiness may get you more money. more ... Gender equality in the workplace Over the past twenty years, women have made huge gains in the workplace but full job equality is still far from reality. more ... Education for well-being: Online discussion We know education is an essential component of well-being, so what makes an education that promotes well-being? more ... Visit our blog Blog RSS feed Find Out MoreArchive Mar 19, 2014 Society at a Glance 2014: OECD Social Indicators

Human Population Predicted To Reach 12 Billion By 2100 At 7.2 billion, the human population is already a serious burden on resources and a threat to the environment and species. Imagine, then, how dire the global situation would be if we were to reach 12 billion, because if the current rate continues, that is what our planet may be facing at the turn of the next century. According to a new study by the United Nations (UN) and the University of Washington, there is an 80% probability that the world population will reach between 9.6 and 12.3 billion in 2100. That’s around 2 billion higher than previous estimates. “The consensus over the past 20 years or so was that world population, which is currently around 7 billion, would go up to 9 billion and level off or probably decline,” study author and statistician Adrian Raftery said in a news release. They anticipate that a large proportion of the increase will occur in Africa because of high fertility and birth rates. Read this next: Keychain First Aid Kit Might Help Save The Bees

25 Best Infographics Of 2011 That Are Still Relevant Today The year of 2011 went very fast for us in the development world and I am sure some of you accomplished important things for your career during this year. But besides our personal achievements, the whole industry managed to reach something that was unthinkable around 10 years ago. To show you how the web progressed during the past year, I collected a series of infographics from the internet and hope, by the end of this article, you will realize what huge potential this year of 2012 has. 1. 60 seconds on the web This one shows what happened on the web during 2011 in a timeframe of 60 seconds, if we minimize the whole year to it. 600 new YouTube videos, almost 700,000 search queries on Google and Facebook status updates and close to 100,000 tweets should say enough about what power the internet holds nowadays. Source 2. It is easy to see how Apple, for example, disrupts today’s web. Source 3. Source 4. Source 5. Want to see some interesting information about the apps in Apple’s Store? Source 6.

Wind Map An invisible, ancient source of energy surrounds us—energy that powered the first explorations of the world, and that may be a key to the future. This map shows you the delicate tracery of wind flowing over the US. The wind map is a personal art project, not associated with any company. If the map is missing or seems slow, we recommend the latest Chrome browser. Surface wind data comes from the National Digital Forecast Database. If you're looking for a weather map, or just want more detail on the weather today, see these more traditional maps of temperature and wind.

50 Great Examples of Data Visualization Wrapping your brain around data online can be challenging, especially when dealing with huge volumes of information. And trying to find related content can also be difficult, depending on what data you’re looking for. But data visualizations can make all of that much easier, allowing you to see the concepts that you’re learning about in a more interesting, and often more useful manner. Below are 50 of the best data visualizations and tools for creating your own visualizations out there, covering everything from Digg activity to network connectivity to what’s currently happening on Twitter. Music, Movies and Other Media Narratives 2.0 visualizes music. Liveplasma is a music and movie visualization app that aims to help you discover other musicians or movies you might enjoy. Tuneglue is another music visualization service. MusicMap is similar to TuneGlue in its interface, but seems slightly more intuitive. Digg, Twitter, Delicious, and Flickr Internet Visualizations