What’s it’s like to get a voter ID when you’re poor and don’t drive. An election official checks a voter's photo identification at an early voting polling site in Austin. 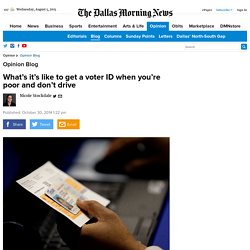 (AP) In Texas’ long-standing debate over our voter ID requirements, considered the toughest in the nation, here’s one defense of the rules we hear over and over again: You need to show an ID to fly or drive or even buy booze; why should our voting system be any less secure? The problem with this argument is that it ignores what it’s like to be poor in this state, and how seemingly simple obstacles become insurmountable when you don’t drive or lack the financial or scheduling wiggle room to acquire the necessary documents. But even acknowledging that is abstract — which is why a new report from the NYU School of Law’s Brennan Center for Justice is so important. They’ve rounded up examples of people encountering problems trying to vote during this early voting period (which ends tomorrow) — the messy real-life struggles people are fighting for their right to be able to cast a ballot. 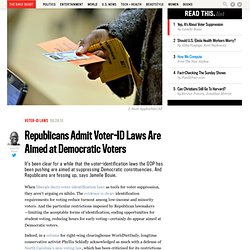 Why health-care professionals are feeling especially alarmed. The announcement that a second case of Ebola has been diagnosed in Dallas should provide an enormous sense of security for the worried general public—after all, the case has occurred not in casual contacts or even family members but rather, as predicted, in someone who cared for the patient in the late stages of his infection.

Against the sigh of semi-relief, though, is the shiver of fear as a collective chill runs down the spine of health-care workers in the United States, Africa, and Spain charged with caring for infected patients. According to reports on Sunday, a female nurse who was involved in the treatment of Thomas Eric Duncan has been confirmed to be carrying the disease, making her the first case of Ebola transmitted in the United States.

This detail is extremely important. 6 Other Times Republicans Admitted Voting Restrictions Are Just About Disenfranchising Democrats. Addicting Info – Shocker: Republicans Account For Most Cases Of U.S. Voter Fraud. The Republican party is certain that U.S. elections are rife with voter fraud. 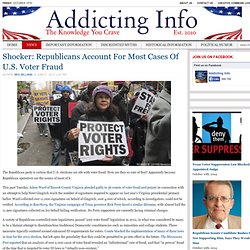 How are they so sure of that? Apparently because Republican operatives are the source of most of it. This past Tuesday, Adam Ward of Bassett County Virginia pleaded guilty to 36 counts of voter fraud and perjury in connection with an attempt to help Newt Gingrich reach the number of signatures required to appear on last year’s Virginia presidential primary ballot. Ward collected over 11,000 signatures on behalf of Gingrich, over 4,000 of which, according to investigators, could not be verified.

According to RawStory, the Virginia campaign of Texas governor Rick Perry faced a similar dilemma, with almost half the 11,900 signatures collected on his behalf failing verification. Rutgers voter fraud expert testifies at Wisconsin voter ID trial. A professor who studied voter fraud in Wisconsin and around the country testified Thursday that it is "exceedingly rare," and that requiring voters to show a photo ID might have prevented just one of the few dozen cases prosecuted in the state over the last decade. 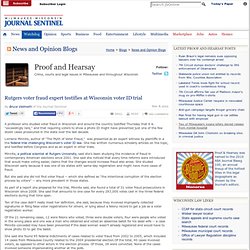 Lorraine Minnite, author of "The Myth of Voter Fraud," was presented as an expert witness by plaintiffs in a the federal trial challenging Wisconsin's voter ID law. She has written numerous scholarly articles on the topic, and testified before Congress and as an expert in other trials. Minnite, a political scientist at Rutgers University, said she's been studying the incidence of fraud in contemporary American elections since 2001.

She said she noticed that every time reforms were introduced that would make voting easier, claims that the changes would increase fraud also arose. McDaniel rep, others locked in courthouse. The Hinds County Sheriff's Department is investigating why three people, including a high-ranking Chris McDaniel campaign official, were found locked in the Hinds County Courthouse in Jackson hours after an election official says the building was closed early Wednesday morning. 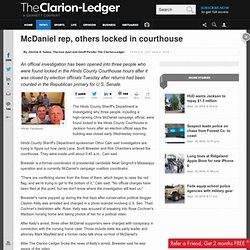 Hinds County Sheriff's Department spokesman Othor Cain said investigators are trying to figure out how Janis Lane, Scott Brewster and Rob Chambers entered the courthouse. They were inside until about 3:45 a.m., Cain said. Brewster is a former coordinator of presidential candidate Newt Gingrich's Mississippi operation and is currently McDaniel's campaign coalition coordinator. "There are conflicting stories from the three of them, which began to raise the red flag, and we're trying to get to the bottom of it," Cain said. "No official charges have been filed at this point, but we don't know where the investigation will lead us. " "I do remember when it came out," he said. "I don't care who it is. Jack Villamaino, Former GOP Candidate, Gets 4 Months In Jail For Felony Voter Fraud. In the midst of his 2012 GOP primary campaign for a Massachusetts state House seat, Jack Villamaino changed the party affiliation of nearly 300 people in his town of East Longmeadow. 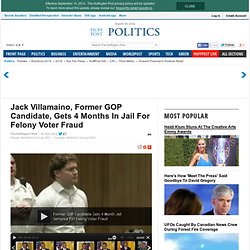 Days later, the same number of absentee ballot requests were dropped off at the town clerk’s office, a list that was almost a “name-for-name match” for those whose registration information Villamaino had altered. Earlier this week, Villamaino pleaded guilty to felony charges of stealing ballots and changing the party affiliation of 280 Democrats during his campaign for state representative.

A judge sentenced him to a year in jail, only four months of which he'll be forced to serve behind bars. The remainder of that sentence will be suspended, and Villamaino will also be required to serve a year of probation. Villamaino's defense attorney had hoped the judge would throw out the felony conviction, while Hampden District Attorney Mark Mastroianni had sought additional felony charges for forgery and perjury.