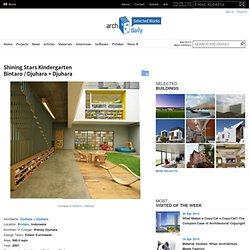 As one of the highly congested real estate development, there is a high demand for educational facilities. Many kindergartens and pre schools are built in residential areas, appearing in even the smallest neighborhood units. Among the many kindergartens in Bintaro, the Shining Stars School has survived for more than ten years, located in two former houses that are joined together, the building began to deteriorate and the need for space was a crucial issue. Rooms had been added to the original structure, taking up almost the whole site, making it impossible for natural light and air to enter the school. Wisnu & Ndari House / djuhara + djuhara. Architects: djuhara + djuhara Location: Bekasi, Indonesia Architect In Charge: Ahmad Djuhara Contractors: Eduard Sirait, Alex Gandung, Andi Linardi, Ujang, Nurhayat, Supri Area: 215.0 sqm Year: 2008 Photographs: djuhara + djuhara This project was offered to the architect after the client had seen his project for the low budget Sugiharto Steel House. 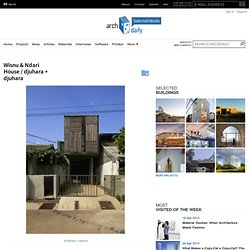 The client had previously lived on the site in a tiny, 36 square meters real estate house, on a 78 square meters piece of land in a high density housing area in the suburbs of Jakarta. 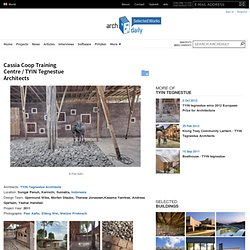 It all began with a visit from a French businessman, Patrick Barthelemy. He had come all the way from Sumatra to our office in Trondheim, and sat before us with a fascinating story and a briefcase full of cinnamon. Part of the story told of how an area of Sumatra supplies 85 % of the cinnamon consumed worldwide. Cassia Coop Training Centre has become a unique centre with ambitions of being better than its competitors, not only in qualty, but first and foremost in ethics. The main idea behind the project is the classic consept of a light wooden construction on a base of heavy brick and concrete. 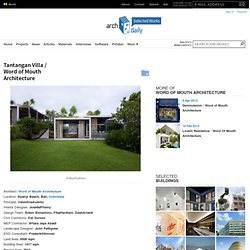 Villa Tantangan – Project Description Villa Tantangan is located on Nyanyi Beach; a private and secluded beach on the west coast of Bali. Another key design approach was the use ofnatural and locally sourced materials. Arsitektur.info. 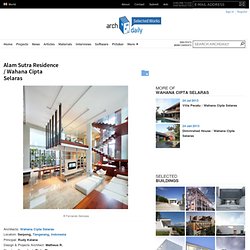 Structure Consultant: Ricky Theo Main Contractor: Neria Oendang Project Year: 2010 Project Area: 524 sqm Photographs: Fernando Gomulya In urban lifestyle, residential concepts usually focus on the resident activity. This is the main concept that used in this house. The house located in the suburb area with good environment which created residential that has interactions with the landscape. The existing landscape with big three’s around the site, inspired this residential design to create a design that can “communicate” between inside and outside. Tropical modern architecture style, selected to adapt with Indonesians tropical climate. In the interior, just like an urban house that has to accommodate all occupants’ activity in relatively small space, the layout was simple. Text provided by Wahana Cipta Selaras. Ikatan Arsitek Indonesia (Indonesian Institute of Architects) Compartment House / Ario Danar. Architects: Ario Danar Location: South Jakarta, Indonesia Site Area: 180 sqm Constructed Area: 126 sqm Project year: 2007 Photographs: Richard Salampessy Our compartment house is located in Bintaro Jaya 4th sector, South Jakarta-Indonesia, which has many types of house. 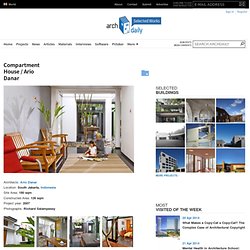 The type of house that we bought in the year of 2000 was the smallest type, type 36 (building area of 36 square meters and land area of 90 square meters). This house is a standard type. Consist of a living room, two (2) bedrooms, a kitchen, and a bathroom. Existing house roof have pitch roof. In 2003, we renovated the house to restore the original structure of the building to its previous condition. 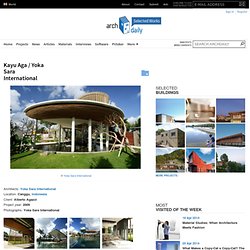 The reasoning behind the plan form of the house is initially elusive. The compound essentially consists of a carport and three orthogonal sleeping pavilions located in the four corners of the site. Occupying the center is a two-story pavilion containing the principal living/dining facilities, with an elevated studio at first floor and a verdant roof garden. 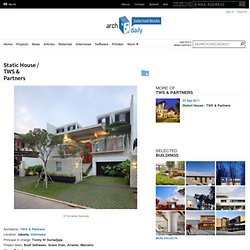 The client came to us with a particular vision of garden house, which can maximize a correlation to outdoor space from within. From client’s brief of room program, come to quite huge area of 800 square meter, which should be located within limited site. Architectural concept In respond to limited site, compare to huge program. we try to elaborate and combine two courtyard spaces, which arranged vertically and super impose each other. D-minution House / SUB. Studio for visionary design. 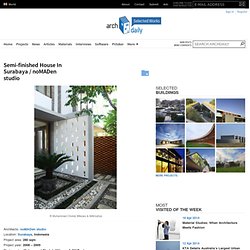 Located at housing estate which was developed by city government of Surabaya in 1980’s at the eastern part of the city. The old house totally demolished due to poor structural condition, only remain roof tile which is still in good condition as recycle material for the new one. The needs This house was planned to be occupied jointly by the owner (elder couple) and one of his son and their families. In addition, this house will be partly used for post-retirement home business and ‘home office’ for one of his son. The users hobbies The users have many hobbies such as collecting traditional ethnic style accessories and furniture, maintaining fish, birds as well as plants. The Limitation and The Respons 1. 2. 3. 4. 5. 6. Ira Residence / Andy Rahman. Architects: Andy Rahman Architect Location: Surabaya, East Java, Indonesia Project area: 180 sqm Project year: 2008 Photographs: Indiga Ikhlasani Ira residence is a typical urban contemporary style house. 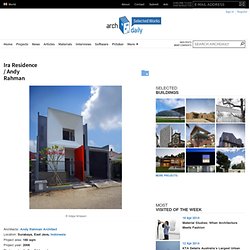 Looks provocative is the spirit of the owner of a dynamic lifestyle and love with new things. Located in a residential area in East Surabaya, this house manages to look attractive in the middle of the Mediterranean-style residential neighborhood. The owners wanted a modern house can arise among their neighborhood because they are bored with Mediterranean-style home design. The House is oriented towards to the East, where the wind blows from, East to West, this is our attempt as a potential entry into the design of this House. Student House / Peter Gunawan. Al-Irsyad Mosque / Urbane. Architects: PT. Urbane Indonesia Location: Kota Baru Parahyangan, Padalarang, Jawa Barat, Indonesia Principal Architect: M. Ridwan Kamil Project Team: Fahry Adhitya Client: PT. Belaputera Intiland Site Area: 8,000 sqm Project Area: 970 sqm Project Year: 2010 Photographs: Emilio Photoimagination A mosque is a place of worship for Muslims—a place to kneel, stoop one’s head and pray solemnly.

Oftentimes, it is also used to carry out various other religious activities. The first thing that might catch one’s attention about this mosque in Kota Baru Parahyangan (KBP) is the absence of a dome, which is almost always a quintessential characteristic of mosques. Atelierriri. Kiri’s House / Atelier Riri. Architects: Atelier Riri Location: Bintaro, Tangerang, Indonesia Project Directors: Novriansyah Yakub Landscape Designer: Tigor Charly Siahaan Constructed Area: 98 sqm Site Area: 90 sqm Project Year: 2009 Photographs: Fernando Gomulya In Indonesian, Kiri means left. An analogy to represent the shape of a house that give an impression as if it’s leaning to the left. Kiri’s House is an application of a design for a house that refers to the owner’s personal character: compact rooms to create practical living style. With an area of land 6×15 meters, this house was designed to be functional.

Shape no longer became our first priority. Rooms were programmed to suit the owner’s cultural life. Both levels is bound with a corridor that taken a shape like a sidecourt on the right side of the building. HMP Architects. Studi-o Cahaya / Mamostudio. Architects: Mamostudio Location: Jakarta, Indonesia Design Principal: Adi Purnomo Design Team: Danny Wicaksono Client: Dr. Lau and Evie Miranda Construction: Adi Y Site Area: 375 sqm Project Area: 600 sqm Project Year: 2007-2009 Photographs: Courtesy of Mamostudio This project is designed at the period after Adi Purnomo released his book “Relativitas” that showed the attitude to put actual and rational reasons as the base of his design decision. It was a time when rationality is re-questioned, whether it is a helping tool to explore creativity or does it creates limitation to find another new possibilities. It is a mix building between residential, working and art gallery that sometime is opened for public. Because the client is a photographer and an art collector (he sometime paints and sculpts), lights is an important element for him to do his works.

What possibilities are open when we are thinking about light in this context? BALI 2010: Marine Research Center in Indonesia. Grey House / SUB. Studio for visionary design. Urbane. Muted House / Aboday Architects. SUBvisionary. TWS. Ikatan Arsitek Indonesia (Indonesian Institute of Architects) Gotongroyongcity. Introduction The International Architecture Biennale Rotterdam (IABR) 2009 in collaboration with Ikatan Arsitek Indonesia (Indonesian Institute of Architects Jakarta Chapter) is pleased to announce an idea competition on the theme of 'gotong royong city' in the context of the extended metropolitan region of Jakarta.

Three winning entries will be selected by an international jury for exhibition in the IABR 2009 and awarded prizes totaling 7,000 Euros. Context: The IABR 2009 The IABR is now well-established as one of the world's premiere sites for critical, creative and progressive thinking on architecture and urbanism. The IABR aims to 'explore to what extent architects, with their knowledge, skills, and imaginative powers, can contribute to solving urgent problems in contemporary society. It therefore challenges the design disciplines, using the specific expertise of architecture, to conduct "research by design" and to develop concrete proposals, based on the Biennale's theme'. Calendar.