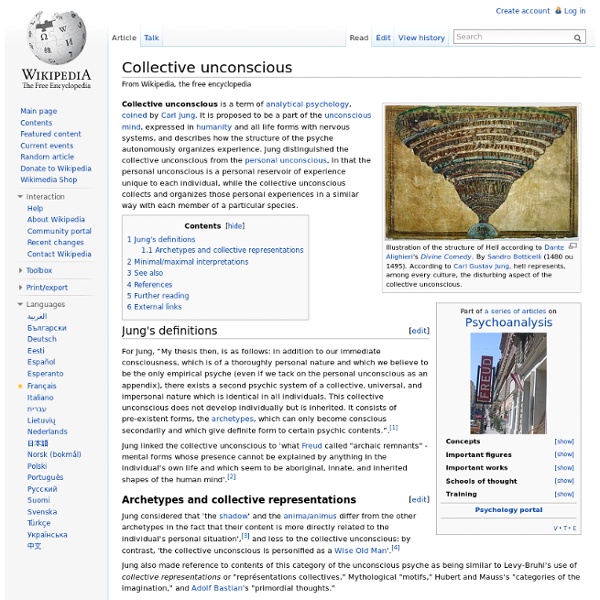 The Crying Boy The Crying Boy is a mass-produced print of a painting by Italian painter Bruno Amadio, also known as Giovanni Bragolin.[1] It was widely distributed from the 1950s onwards. There are numerous alternative versions, all portraits of tearful young boys or girls.[1] Curse[edit] By the end of November, belief in the painting's curse was widespread enough that The Sun was organising mass bonfires of the paintings, sent in by readers. Karl Pilkington has made reference to these events on The Ricky Gervais Show. Steve Punt, a British writer and comedian, investigated the curse of the crying boy in a BBC radio Four production called Punt PI. See also[edit] The Hands Resist Him also known as The eBay Haunted Painting References[edit] External links[edit]

www.ncbi.nlm.nih Orgone Orgone energy accumulator (with door closed) (with door open) Alternating layers of organic and non-organic materials inside the walls supposedly increase the orgone concentration inside the enclosure relative to the surrounding environment. Reich's theories held that deficits or constrictions in bodily orgone were at the root of many diseases—including cancer—much as deficits or constrictions in the libido could produce neuroses in Freudian theory. The National Center for Complementary and Alternative Medicine lists orgone as a type of "putative energy".[12] There is no empirical support for the concept of orgone in medicine or the physical sciences,[6][dead link] and research into the concept ceased with the end[when?] History[edit] The concept of orgone belongs to Reich's later work, after he immigrated to the US. Reich with one of his cloudbusters, a device which supposedly could influence weather by altering levels of atmospheric orgone. Evaluation[edit] In popular culture[edit] J.D.

www.dictionary (when used before a singular noun, usually preceded by the) the remaining (one or ones in a group of which one or some have been specified)I'll read the other sections of the paper laterthe other (as pronoun; functioning as sing)one walks while the other rides (a) different (one or ones from that or those already specified or understood)he found some other house; no other man but you; other days were happier additional; furtherthere are no other possibilities (preceded by every) alternate; twoit buzzes every other minute other than apart from; besidesa lady other than his wife different fromhe couldn't be other than what he is Archaic form: other from no other archaic nothing elseI can do no other or other (preceded by a phrase or word with some) used to add vagueness to the preceding pronoun, noun, noun phrase, or adverbsome dog or other bit him; he's somewhere or other other things being equal conditions being the same or unchanged the other day a few days ago

www.merriam-webster 1a : being the one (as of two or more) remaining or not included held on with one hand and waved with the other one b : being the one or ones distinct from that or those first mentioned or implied taller than the other boys 2: not the same : different any other color would have been better something other than it seems to be 3: additional sold in the U.S. and 14 other countries 4a : recently past the other evening 5: disturbingly or threateningly different : alien, exotic 1 : a different or additional one the others came later 2a : one that remains of two or more b : a thing opposite to or excluded by something else went from one side to the other nature as the other of culture 3a : one (such as another person) that is psychologically differentiated from the self b often capitalized : one considered by members of a dominant group as alien, exotic, threatening, or inferior (as because of different racial, sexual, or cultural characteristics) 1 : a different or additional one something or other

Villisca, Iowa Villisca is a city in Montgomery County, Iowa, United States. The population was 1,252 at the 2010 census. It is most notable for the unsolved axe murders that took place in the town during the summer of 1912. Geography[edit] Villisca is located at WikiMiniAtlas According to the United States Census Bureau, the city has a total area of 1.90 square miles (4.92 km2), all of it land.[1] Demographics[edit] 2010 census[edit] There were 525 households of which 30.5% had children under the age of 18 living with them, 48.6% were married couples living together, 10.3% had a female householder with no husband present, 4.2% had a male householder with no wife present, and 37.0% were non-families. 31.6% of all households were made up of individuals and 16.9% had someone living alone who was 65 years of age or older. 2000 census[edit] The median income for a household in the city was $26,694, and the median income for a family was $34,345. Villisca Axe Murders[edit] Josiah B. References[edit]

CosmicConsciousness Quantum Physics of God: How Consciousness Became the Universe and Created Itself Rhawn Joseph Cosmology.com For thousands of years humans have gazed into the heavens pondering the nature of universe, with some arguing the Universe was created, and others championing an eternal, infinite cosmos in continual flux and change and with no beginning and no end. This latter view, developed by the Greek "atomists", and the ancient Hindus and Buddhists, was the prevailing theory accepted by most scientists until the 20th century, when the creationists, with the backing of the Catholic Church, came up with a scientific explanation for "the creation" which was eventually accepted by the majority of scientists. Ironically, it was Fred Hoyle, a leading proponent of an infinite universe, who dismissively coined the phrase which popularized the creationist theory. It was in 1927 that Monsignor Georges Lemaitre, published what became known as the theory of the big bang. The Universe was created. Bohr.

Vanishing hitchhiker The Vanishing Hitchhiker (or variations such as the ghostly hitchhiker, the disappearing hitchhiker, the phantom hitchhiker or simply the hitchhiker) story is an urban legend in which people traveling by vehicle meet with or are accompanied by a hitchhiker who subsequently vanishes without explanation, often from a moving vehicle. Vanishing hitchhikers have been reported for centuries and the story is found across the world, with many variants. The popularity and endurance of the legend has helped it spread into popular culture. Public knowledge of the term expanded greatly with the 1981 publication of Jan Harold Brunvand's book The Vanishing Hitchhiker, which helped launch public awareness of urban legends. The archetypal modern vanishing hitchhiker is a figure seen in the headlights of a car traveling by night with a single occupant. Variations[edit] In such tellings, the garment borrowed is often subsequently found draped over a gravestone in a local cemetery. Classifications[edit] A.

daily.jstor Sigmund Freud died 80 years ago this week, and his 1923 study, The Ego and the Id, which introduced many of the foundational concepts of psychoanalysis, entered the public domain earlier this year. Freud’s ideas have long been absorbed by popular culture, but what role do they continue to play in the academy, in the clinical profession, and in everyday life? To answer those questions, this roundtable discussion—curated by Public Books and JSTOR Daily—asks scholars about the legacy of The Ego and the Id in the 21st century. • Elizabeth Lunbeck: Pity the Poor Ego! Pity the Poor Ego! Elizabeth Lunbeck It would be hard to overestimate the significance of Freud’s The Ego and the Id for psychoanalytic theory and practice. Type “id ego superego” into a Google search box and you’re likely to be directed to sites offering to explain the terms “for dummies”—a measure of the terms’ ubiquity if not intelligibility. The Freudian ego sought to harmonize relations among the mind’s agencies. Todd McGowan

Valentich disappearance The Valentich disappearance refers to the disappearance of 20-year-old Frederick Valentich while on a 125-mile (235 km) training flight in a Cessna 182L light aircraft over Bass Strait in Australia on 21 October 1978. Described as a "flying saucer enthusiast", Valentich radioed Melbourne air traffic control that he was being accompanied by an aircraft about 1,000 feet (300 m) above him, that his engine had begun running roughly, and finally reported, "It's not an aircraft."[1] There were belated reports of a UFO sighting in Australia on the night of the disappearance, however Associated Press reported that the Department of Transport was skeptical a UFO was behind Valentich's disappearance, and that some of their officials speculated that "Valentich became disorientated and saw his own lights reflected in the water, or lights from a nearby island, while flying upside down Frederick Valentich[edit] Details[edit] Search and rescue[edit] Investigation[edit] Proposed explanations[edit]

journalpsyche The Freudian Theory of Personality Sigmund Freud is considered to be the father of psychiatry. Among his many accomplishments is, arguably, the most far-reaching personality schema in psychology: the Freudian theory of personality. It has been the focus of many additions, modifications, and various interpretations given to its core points. Despite many reincarnations, Freud’s theory is criticized by many (e.g. for its perceived sexism) and it remains the focus of hot discussions on its relevance today. Etymology Freud was a one of a kind thinker. Definition Human Personality: The adult personality emerges as a composite of early childhood experiences, based on how these experiences are consciously and unconsciously processed within human developmental stages, and how these experiences shape the personality. Not every person completes the necessary tasks of every developmental stage. Stages of Development These stages are: Oral (0 – 1.5 years of age): Fixation on all things oral.

en.m.wikipedia Although the model is structural and makes reference to an apparatus, the id, ego and super-ego are purely symbolic concepts about the mind and do not correspond to actual somatic structures of the brain (such as the kind dealt with by neuroscience). The concepts themselves arose at a late stage in the development of Freud's thought: the "structural model" (which succeeded his "economic model" and "topographical model") was first discussed in his 1920 essay Beyond the Pleasure Principle and was formalized and elaborated upon three years later in his The Ego and the Id. Freud's proposal was influenced by the ambiguity of the term "unconscious" and its many conflicting uses. Id[edit] According to Freud the id is unconscious by definition: In the id, "contrary impulses exist side by side, without cancelling each other out. ... Developmentally, the id precedes the ego; i.e., the psychic apparatus begins, at birth, as an undifferentiated id, part of which then develops into a structured ego.