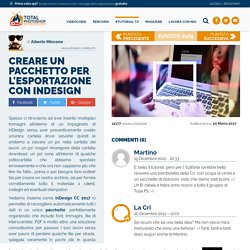 Sia per creare un nostro archivio, sia per fornire correttamente tutto il materiale a clienti, colleghi ed eventuali stampatori. Esportare PDF per la stampa - Guida definitiva. Inserire un'immagine in un titolo con InDesign ⋆ Total Photoshop. InDesign: Copy an entire layer from one file to another - Redokun. If you have ever worked with InDesign documents that needed to be produced in other languages, you are likely to have encountered the need to copy an entire layer from one InDesign document to another. 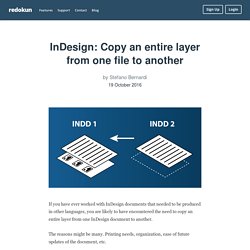 How to use live captions in InDesign. InDesign CS5 and later versions have an array of features that are often overlooked and under-used. 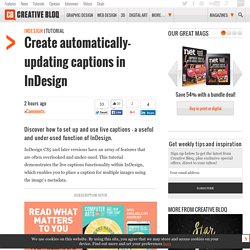 This tutorial demonstrates the live captions functionality within InDesign, which enables you to place a caption for multiple images using the image's metadata. Subscription offer In this example, I'll show you how to display the image's title as a caption. Creating live captions means that if you replace one of the images with another, the caption will automatically be updated. The function has various other uses too: it's particularly useful when creating contact sheets as the metadata can be used to display the shutter speed, ISO or even the brand of camera that the image was taken with. 01. Place one or more images into InDesign, and decide where you want the caption for the images to be positioned within the design. 02. When you are happy with the layout, select the images. 03. 04. Next, select where you would like the caption to be positioned in relation to the image. 05.

Liked this? 10 pro tips for working with type in InDesign. When it comes to typography, everyone has their own preferences, from typefaces to weight to alignment. 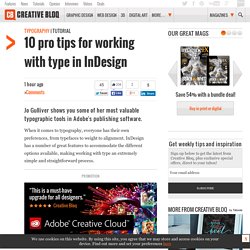 InDesign has a number of great features to accommodate the different options available, making working with type an extremely simple and straightforward process. Promotion In this tutorial, I'm going to walk through some of the features I've found most useful in my everyday work on Computer Arts magazine. Focusing mainly on the Character Formatting control panel, I'll show you how these options can be used on a day-to-day basis to help speed up your workflow. 01.

The majority of typefaces, particularly serifs, will contain ligatures. 02. Found in the flyout menu of the Control panel, the Underline Options dialog box can be used to adjust the alignment and appearance of any underline. 03. The Underline Options dialog box also provides a great way to apply a highlight to text. 04. 05. Adobe Paragraph and Adobe Single-line Composer are alternative ways of controlling copy flow.

Mastering grids in InDesign CC. Creating the perfect grid takes a bit of planning, but it's worth investing this time as it can improve your design by giving it balance. 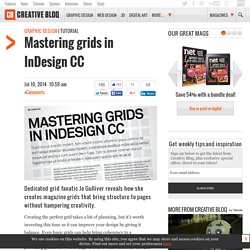 Even basic grids can help bring coherency to a multi-page document by giving your pages structure and providing guides for you to align text and other elements to. And a well-planned grid should in no way limit your creativity. Throughout this workflow guide I'll explain the processes I use to create grids for magazines. The main thing to remember when using a grid is that it's there for reference and as a guide – sometimes the rules can be broken. 01. First, you need to use some basic maths to work out a document grid that fits the width of your page perfectly. 02. Eleven Tricks That Will Help Your Workflow in InDesign.

Today we have a collection of useful InDesign tips will help or enhance your operating skills. 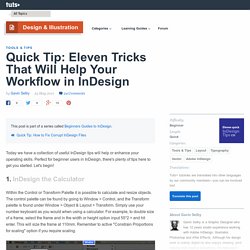 Perfect for beginner users in InDesign, there's plenty of tips here to get you started. Let's begin! Within the Control or Transform Palette it is possible to calculate and resize objects. The control palette can be found by going to Window > Control, and the Transform palette is found under Window > Object & Layout > Transform. Simply use your number keyboard as you would when using a calculator. To place an object in the absolute center of the page, select your object using the selection tool, cut (Command + X), go to View > Fit Page in Window (Command + 0) and then Paste (Command + V). 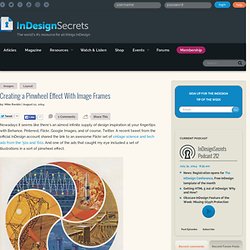 A recent tweet from the official InDesign account shared the link to an awesome Flickr set of vintage science and tech ads from the ’50s and ’60s. And one of the ads that caught my eye included a set of illustrations in a sort of pinwheel effect. I’m sure that the intent was to convey a sense of energy, progress, and the coordinated nature of the company’s diverse offerings (at least that’s the kind of stuff I would say if I were pitching the design). Anyway, I loved the retro feel of the ad and felt compelled to recreate it with InDesign. Copy and paste the circle in place. Switch the reference point to the bottom and double-click the Rotate tool. Now you have two overlapping circles that are half the diameter of the original. Copy the rotated circle to your clipboard.

Design.tutsplus. Adobe InDesign is a remarkable tool for many print and marketing design projects. 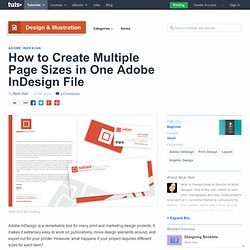 It makes it extremely easy to work on publications, move design elements around, and export out for your printer. However, what happens if your project requires different sizes for each item? Letterhead is a great example of this. Inspire. No one likes to fail. 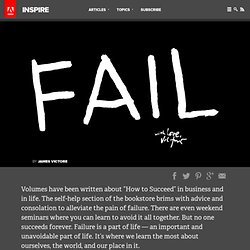 No one enjoys the feelings of embarrassment, the deflated ego, or the idea that your future is slowly swirling to financial ruin. Design.tutsplus. Adobe InDesign is a diverse software programme for creating beautiful designs for print and digital. 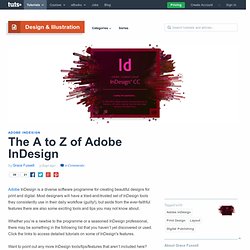 Most designers will have a tried-and-trusted set of InDesign tools they consistently use in their daily workflow (guilty!) , but aside from the ever-faithful features there are also some exciting tools and tips you may not know about. Whether you’re a newbie to the programme or a seasoned InDesign professional, there may be something in the following list that you haven’t yet discovered or used. Watch the Online Video Course InDesign Secrets. If you've been using InDesign for any appreciable amount of time, then you have probably created some custom settings for yourself. Settings that you would like to, say, transfer to a second computer that you're using, like a laptop. Or maybe you want to share with other people in your workgroup, put it on the server for other people to use. Like custom workspaces or saved find change queries and so on. Design Striking Layouts for Your Own Cookery Book Using InDesign.

In this tutorial we’ll create a variety of layouts for a Cookery Book intended for self-publishing, either in print or as an eBook, using Adobe InDesign. I’ll show you how you can showcase simple, striking photos to create minimal, colourful designs for your pages. Let’s get cooking! Beginners Guides to InDesign - Tuts+ Design & Illustration Tutorials. InDesign tutorial: How to design a magazine cover with Pantone colours and spot varnishes.