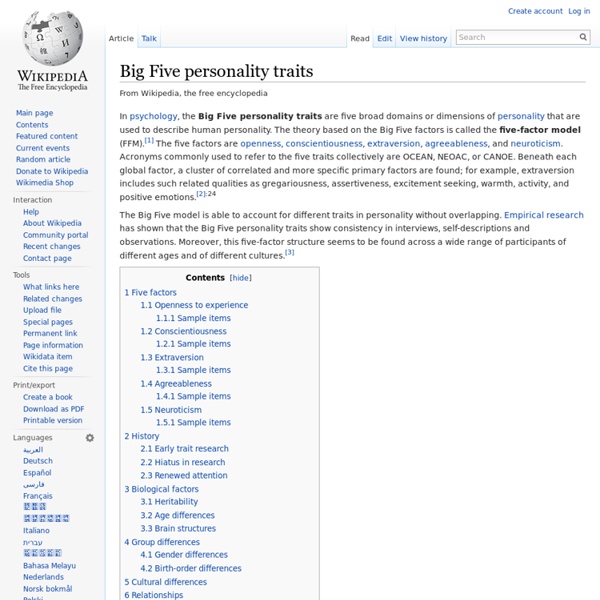 In psychology, the Big Five personality traits are five broad domains or dimensions of personality that are used to describe human personality. The theory based on the Big Five factors is called the five-factor model (FFM).[1] The five factors are openness, conscientiousness, extraversion, agreeableness, and neuroticism. Acronyms commonly used to refer to the five traits collectively are OCEAN, NEOAC, or CANOE. Beneath each global factor, a cluster of correlated and more specific primary factors are found; for example, extraversion includes such related qualities as gregariousness, assertiveness, excitement seeking, warmth, activity, and positive emotions.[2]:24 The Big Five model is able to account for different traits in personality without overlapping. Empirical research has shown that the Big Five personality traits show consistency in interviews, self-descriptions and observations. §Five factors[edit] Openness to experience: (inventive/curious vs. consistent/cautious).

Resources for GRADEpro HELP files We highly recommend using the HELP files found in the GRADEpro software. The HELP files provide specific information to create Summary of Findings (SoF) Tables and use the GRADE approach to grade the quality of the evidence. The Big Five Project - Personality Test Directions: The following statements concern your perception about yourself in a variety of situations. Your task is to indicate the strength of your agreement with each statement, utilizing a scale in which 1 denotes strong disagreement, 5 denotes strong agreement, and 2, 3, and 4 represent intermediate judgments. In the boxes after each statement, click a number from 1 to 5 from the following scale: Strongly disagreeDisagreeNeither disagree nor agreeAgreeStrongly agree There are no "right" or "wrong" answers, so select the number that most closely reflects you on each statement.

Myers-Briggs Type Indicator Model of personality types A chart with descriptions of each Myers–Briggs personality type and the four dichotomies central to the theory The Myers–Briggs Type Indicator (MBTI) is an introspective self-report questionnaire indicating differing psychological preferences in how people perceive the world and make decisions.[1][2][3] The original versions of the MBTI were constructed by two Americans, Katharine Cook Briggs and her daughter Isabel Briggs Myers.[4] The MBTI is based on the conceptual theory proposed by Swiss psychiatrist Carl Jung,[5] who had speculated that people experience the world using four principal psychological functions – sensation, intuition, feeling, and thinking – and that one of these four functions is dominant for a person most of the time.[6] The four categories are Introversion/Extraversion, Sensing/Intuition, Thinking/Feeling, Judging/Perception.

The sketchnote revolution « Dachis Group Collaboratory I’ve got an idea for a new year’s resolution: Join the sketchnote revolution. Sketchnotes are a visual form of note-taking that can include drawings, various lettering sizes and styles, color, icons, arrows, boxes and more — whatever works for you. I’d say that sketchnoting is officially a movement — maybe you’ve seen some from SXSWi or other conferences. Big Five factors Explanations > Preferences > Big five factors The Big Five | Discussion | So what? The 'Big Five' were derived as a simplified set of personality indicators. The Big Five

Two-factor models of personality Beginnings[edit] The Roman physician Galen mapped the four temperaments (sanguine, phlegmatic, choleric and melancholic) to a matrix of hot/cold and dry/wet, taken from the four classical elements.[1] Two of these temperaments, sanguine and choleric, shared a common trait: quickness of response (corresponding to "heat"), while the melancholic and phlegmatic shared the opposite, a longer response (coldness). The melancholic and choleric, however, shared a sustained response (dryness), and the sanguine and phlegmatic shared a short-lived response (wetness).

Designing conference posters » Colin Purrington A large-format poster is a big piece of paper or wall-mounted monitor featuring a short title, an introduction to your burning question, an overview of your novel experimental approach, your amazing results in graphical form, some insightful discussion of aforementioned results, a listing of previously published articles that are important to your research, and some brief acknowledgement of the tremendous assistance and financial support conned from others — if all text is kept to a minimum (less than a 1000 words), a person could fully read your poster in 5-10 minutes. Section content • DOs and DON’Ts • Adding pieces of flair • Presenting • Motivational advice • Software • Templates • Printing • Useful literature • Organizing a poster session What to put in each section Below, I’ve provided rough tips on how many words each of these sections might have, but those guesses are assuming you have a horizontal poster that is approximately 3×4′. Adjust accordingly.

Education Week Opinion By Carol Dweck For many years, I secretly worked on my research. I say “secretly” because, once upon a time, researchers simply published their research in professional journals—and there it stayed. However, my colleagues and I learned things we thought people needed to know. We found that students’ mindsets—how they perceive their abilities—played a key role in their motivation and achievement, and we found that if we changed students’ mindsets, we could boost their achievement.