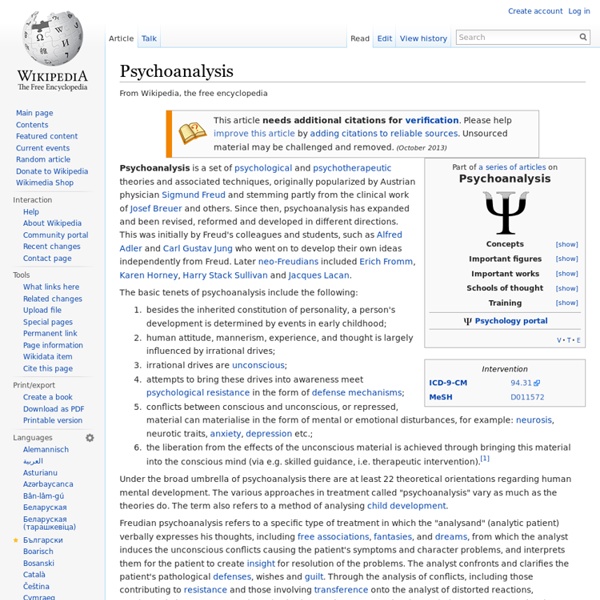 Psychoanalysis is a set of psychological and psychotherapeutic theories and associated techniques, originally popularized by Austrian physician Sigmund Freud and stemming partly from the clinical work of Josef Breuer and others. Since then, psychoanalysis has expanded and been revised, reformed and developed in different directions. This was initially by Freud's colleagues and students, such as Alfred Adler and Carl Gustav Jung who went on to develop their own ideas independently from Freud. Later neo-Freudians included Erich Fromm, Karen Horney, Harry Stack Sullivan and Jacques Lacan. The basic tenets of psychoanalysis include the following: Under the broad umbrella of psychoanalysis there are at least 22 theoretical orientations regarding human mental development. Psychoanalysis has received criticism from a wide variety of sources. History[edit] 1890s[edit] The idea of psychoanalysis first started to receive serious attention under Sigmund Freud. 1900–1940s[edit] 1940s–present[edit] Related:  The problems with philosophy

Obsessive–compulsive disorder Obsessive–compulsive disorder (OCD) is an anxiety disorder characterized by intrusive thoughts that produce uneasiness, apprehension, fear, or worry; by repetitive behaviors aimed at reducing the associated anxiety; or by a combination of such obsessions and compulsions. Symptoms of the disorder include excessive washing or cleaning; repeated checking; extreme hoarding; preoccupation with sexual, violent or religious thoughts; relationship-related obsessions; aversion to particular numbers; and nervous rituals, such as opening and closing a door a certain number of times before entering or leaving a room. These symptoms can be alienating and time-consuming, and often cause severe emotional and financial distress. The acts of those who have OCD may appear paranoid and potentially psychotic. However, OCD sufferers generally recognize their obsessions and compulsions as irrational and may become further distressed by this realization. Signs and symptoms Obsessions Primarily obsessional Causes

Josef Breuer Josef Breuer (German: [ˈbʁɔʏɐ]; 15 January 1842 – 20 June 1925) was a distinguished physician who made key discoveries in neurophysiology, and whose work in the 1880s with his patient Bertha Pappenheim, known as Anna O., developed the talking cure (cathartic method) and laid the foundation to psychoanalysis as developed by his protégé Sigmund Freud.[1] Early life[edit] Born in Vienna, his father, Leopold Breuer, taught religion in Vienna's Jewish community. Neurophysiology[edit] Breuer, working under Ewald Hering at the military medical school in Vienna, was the first to demonstrate the role of the vagus nerve in the reflex nature of respiration. Independent of each other[3] in 1873, Breuer and the physicist and mathematician Ernst Mach discovered how the sense of balance (i.e. the perception of the head’s imbalance) functions: that it is managed by information the brain receives from the movement of a fluid in the semicircular canals of the inner ear. Anna O. Family[edit] Works[edit]

Dialectic of Enlightenment Dialectic of Enlightenment (German: Dialektik der Aufklärung) is a work of philosophy and social criticism written by Frankfurt School philosophers Max Horkheimer and Theodor W. Adorno and first published in 1944. One of the core texts of Critical Theory, it explains the socio-psychological status quo that had been responsible for what the Frankfurt School considered the failure of the Age of Enlightenment. Historical context[edit] One of the distinguishing characteristics of the new Critical Theory, as Adorno and Horkheimer tried to elaborate it in Dialectic of Enlightenment, is a certain ambivalence concerning the ultimate source or foundation of social domination. Yet, contrary to Marx’s famous prediction in the Preface to a Contribution to the Critique of Political Economy, this shift did not lead to "an era of social revolution," but rather to fascism and totalitarianism. Topics and themes[edit] Editions[edit] See also[edit] Notes[edit] Jump up ^ Adorno, T. External links[edit]

28 Dignified Ways to Impress Everyone Around You post written by: Marc Chernoff Email Far more often than any of us like to admit, our actions are driven by an inner desire to impress other people. This desire is often reflected in the brand name products we use, the bars and restaurants we frequent, the houses and cars we buy and the careers we choose. But are name brand products, fancy bars, houses and cars really that impressive? What about a person who holds an elite position in a career field they dislike? Why? Consider the following questions: He drives a Porsche, but can he truly afford the car payment? You get the idea. Now take a moment and imagine a person who loves what he does for a living, smiles frequently and bleeds passion in every breath he takes. Here are 28 dignified ways to impress everyone around you. We make a living by what we get. Be authentic. Of course, the coolest thing about this list is that everything you need to impress everyone around you is already contained within you. Photo by: Khalid

Psychopathology Psychopathology is the scientific study of mental disorders, including efforts to understand their genetic, biological, psychological, and social causes; develop classification schemes (nosology) which can improve treatment planning and treatment outcomes; understand the course of psychiatric illnesses across all stages of development; more fully understand the manifestations of mental disorders;[a] and investigate potentially effective treatments.[b][1] At least conceptually,[c] psychopathology is a subset of pathology, which is the "... scientific study of the nature of disease and its causes, processes, development, and consequences. History[edit] Early explanations for mental illnesses were influenced by religious belief and superstition. The Greek physician Hippocrates was one of the first to reject the idea that mental disorders were caused by possession of demons or the devil. As the study of psychiatric disorders[edit] The four Ds[edit] The p factor[edit] As mental symptoms[edit]

Dot-com bubble The period was marked by the founding (and, in many cases, spectacular failure) of a group of new Internet-based companies commonly referred to as dot-coms. Companies could cause their stock prices to increase by simply adding an "e-" prefix to their name or a ".com" to the end, which one author called "prefix investing."[3] A combination of rapidly increasing stock prices, market confidence that the companies would turn future profits, individual speculation in stocks, and widely available venture capital created an environment in which many investors were willing to overlook traditional metrics, such as P/E ratio, in favor of basing confidence on technological advancements. The collapse of the bubble took place during 1999–2001. Bubble growth[edit] Soaring stocks[edit] "But did the kids [the often young dotcom entrepreneurs] dupe the establishment by drawing them into fake companies, or did the establishment dupe the kids by introducing them to Mammon and charging a commission on it?"

Psychology theories, articles, personality tests and more at Psychologist World - Psychologist World The Interpretation of Dreams The Interpretation of Dreams (German: Die Traumdeutung) is an 1899 book by Sigmund Freud, the founder of psychoanalysis, in which the author introduces his theory of the unconscious with respect to dream interpretation, and discusses what would later become the theory of the Oedipus complex. Freud revised the book at least eight times and, in the third edition, added an extensive section which treated dream symbolism very literally, following the influence of Wilhelm Stekel. Freud said of this work, "Insight such as this falls to one's lot but once in a lifetime The book was first published in an edition of 600 copies, which did not sell out for eight years. Because of the book's length and complexity, Freud also wrote an abridged version called On Dreams. Background[edit] Freud spent the summer of 1895 at Schloss BelleVue[3] near Grinzing in Austria, where he began the inception of The Interpretation of Dreams. Overview[edit] Sources of dream content[edit] On Dreams[edit] Contents[edit]