Apple - How to store a string in KeyChain , iOS? Kishikawakatsumi/UICKeyChainStore. Using the Keychain to store passwords on iOS. When people need to save a password or any other type of sensitive information in an iOS app I see them way too often just storing it in plain text in the NSUserDefaults. 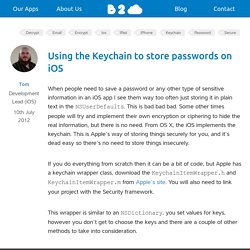 This is bad bad bad. Some other times people will try and implement their own encryption or ciphering to hide the real information, but there is no need. From OS X, the iOS implements the keychain. This is Apple’s way of storing things securely for you, and it’s dead easy so there’s no need to store things insecurely. If you do everything from scratch then it can be a bit of code, but Apple has a keychain wrapper class, download the KeychainItemWrapper.h and KeychainItemWrapper.m from Apple’s site. This wrapper is similar to an NSDictionary, you set values for keys, however you don’t get to choose the keys and there are a couple of other methods to take into consideration.

SimpleKeychain: A keychain library with iOS 8 & TouchID support. A few weeks back we released the first version of our native iOS SDK to help you add authentication to your app. 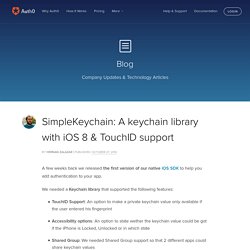 We needed a Keychain library that supported the following features: TouchID Support: An option to make a private keychain value only available if the user entered his fingerprintAccessibility options: An option to state wether the keychain value could be got if the iPhone is Locked, Unlocked or in which stateShared Group: We needed Shared Group support so that 2 different apps could share keychain values As there was no library that fulfilled our needs, we decided to build SimpleKeychain. Let’s see some of the different use cases that we’ve created and used. CocoaDocs.org - A0SimpleKeychain Class Reference. Overview A simple helper class to deal with storing and retrieving values from iOS Keychain. 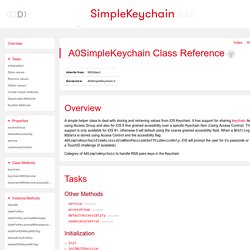 It has support for sharing keychain items using Access Group and also for iOS 8 fine grained accesibility over a specific Kyechain Item (Using Access Control). The support is only available for iOS 8+, otherwise it will default using the coarse grained accesibility field. When a NSString or NSData is stored using Access Control and the accesibility flag A0SimpleKeychainItemAccessibleWhenPasscodeSetThisDeviceOnly, iOS will prompt the user for it’s passcode or pass a TouchID challenge (if available). Category of A0SimpleKeychain to handle RSA pairs keys in the Keychain Properties accessGroup @property (readonly, nonatomic) NSString *accessGroup Discussion Access Group for Keychain item sharing. 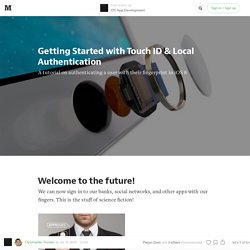 At the Apple WWDC (World Wide Developer Conference) they announced that developers could now use Touch ID in their apps. As you may remember, some developers looked into the private frameworks in iOS 7 and found a framework called BiometricsKit. This got us developers giddy with anticipation, hoping and praying for third party access. Introducing LocalAuthentication.framework.

This is the framework that allows you to authenticate with TouchID (and potentially other types of local authentication). Storing information in the iOS Keychain. Many applications in the AppStore handle account information and other private data. 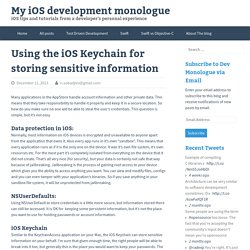 This means that they take responsibility to handle it properly and keep it in a secure location. So how do you make sure no one will be able to steal the user’s credentials. This question is simple, but it’s not easy. Data protection in iOS: Normally, most information on iOS devices is encrypted and unavailable to anyone apart from the application that owns it. NSUserDefaults: Using NSUserDefault to store credentials is a little more secure, but information stored there can still be accessed. iOS Keychain Similar to the KeychainAccess application on your Mac, the iOS Keychain can store sensitive information on your behalf. Using the Keychain services API Unfortunately, using the API for storing data in the keychain is not a easy as many of you would hope. Generic Keychain The Generic Keychain sample code contains the KeychainItemWrapper class. Let me explain. SimpleKeychain: A keychain library with iOS 8 & TouchID support. 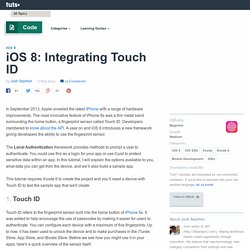 The most innovative feature of iPhone 5s was a thin metal band surrounding the home button, a fingerprint sensor called Touch ID. Developers clambered to know about the API. A year on and iOS 8 introduces a new framework giving developers the ability to use the fingerprint sensor. The Local Authentication framework provides methods to prompt a user to authenticate. You could use this as a login for your app or use it just to protect sensitive data within an app. This tutorial requires Xcode 6 to create the project and you’ll need a device with Touch ID to test the sample app that we'll create. Touch ID refers to the fingerprint sensor built into the home button of iPhone 5s.

The Touch ID sensor is able to scan your fingers at a resolution of 500 pixels per inch, allowing it to put each print into one of three categories, arch, whorl, or loop. Enter a name for your project, I've called mine Auth.