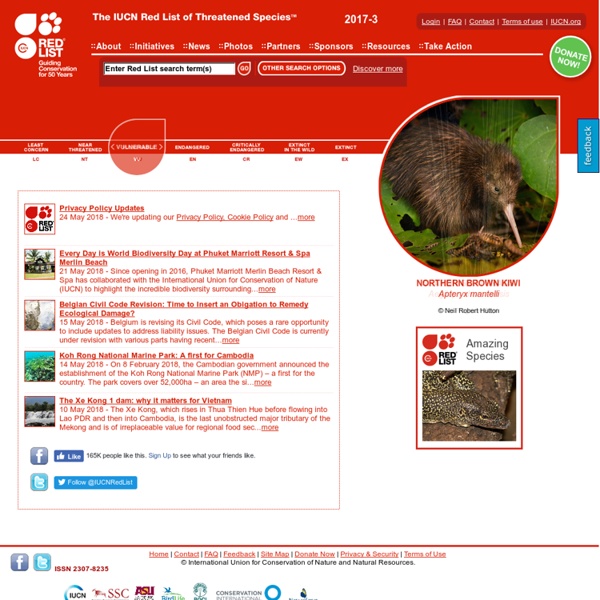 User:Tillman/Favorite minerals From Wikipedia, the free encyclopedia Favorite mineral photos Goethite after pyrite, Utah Blue fluorite, China Copper "sword", Kazakhstan Mockingbird Mine, California Johachidolite, a calcium aluminum borate, from Burma. Per Rob Lavinsky, "this specimen is an incredible rarity." The Adventures Of Tom Sawyer by Mark Twain 1 previous: Preface No answer. "What's gone with that boy, I wonder? You TOM!" The old lady pulled her spectacles down and looked over them about the room; then she put them up and looked out under them. Politics Blog : Lies, Half-Truths and Contradictions: Mac Invented the Blackberry Yes, this is a ridiculous one, but we have to throw it on the LHC pile. When talking with reporters Tuesday morning, Sen. John McCain’s chief economic adviser, Douglas Holtz-Eakin, held up his Blackberry and said, “You’re looking at the miracle that John McCain helped create.” Nowt that’s impressive.

Extreme Environments - StumbleUpon People Get Thirsty in Winter, Too by Karen Berger from GORP In cold weather camping, one of the best things you can do to stay healthy is develop a drinking habit. I'm talking water, not wine. Adequate hydration is key to avoiding hypothermia and altitude sickness. Cubic Symmetric Graph A cubic symmetric graph is a symmetric cubic (i.e., regular of order 3). Such graphs were first studied by Foster (1932). They have since been the subject of much interest and study. Since cubic graphs must have an even number of vertices, so must cubic symmetric graphs.

V R Main on the truth behind Manet's favourite model, Victorine Meurent Picture the predicament. She is 18, working-class, poor, with a secret ambition to become an artist. He is 30, rich, aristocratic, and a painter. The year is 1862; the setting, his studio in Paris. She is modelling for him, and, as they talk, their ideas merge. Two of the paintings he produces with her will become among the most famous in the world. Mind-to-mind thought talking possible by 2030, scientist says Today we enjoy basic conversations with our smart phone, desktop PC, games console, TV and soon, our car; but voice recognition, many believe, should not be viewed as an endgame technology. Although directing electronics with voice and gestures may be considered state-of-the-art today, we will soon be controlling entertainment and communications equipment not by talking or waving; but just by thinking! Forget Siri, if future-thinking researchers have their way, your brain could soon be chatting away on the phone. A new implant developed by UC-Berkeley neuroscientist, Robert Knight, could create a game-changing relationship between you and your machines. You may soon be able to transmit thoughts via the Internet using a translator chip implanted in the brain that converts thoughts into words.