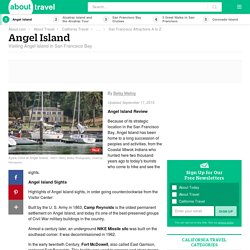 Angel Island Review Because of its strategic location in the San Francisco Bay, Angel Island has been home to a long succession of peoples and activities, from the Coastal Miwok Indians who hunted here two thousand years ago to today's tourists who come to hike and see the sights. Angel Island Sights Highlights of Angel Island sights, in order going counterclockwise from the Visitor Center: Built by the U. Almost a century later, an underground NIKE Missile silo was built on the southeast corner.

In the early twentieth Century, Fort McDowell, also called East Garrison, replaced Fort Reynolds. It lay unused until the Cold War. Perhaps the most famous and interesting chapter in Angel Island's history was its life as Immigration Station from 1910 to 1940. Between 1910 and 1930, a million new immigrants were processed before beginning their lives in America. Guided tours of most of these locations are offered on weekends and holidays. Hike Yosemite in a Week - Backpacker. Clouds Rest, Yosemite National Park (Photo by Michael Lanza) We’re floating on a granite cloud. 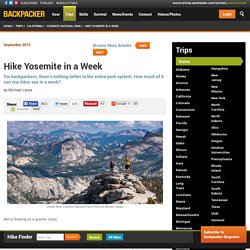 At least, that’s the sensation we get walking across the slender spine of 9,926-foot Clouds Rest, which levitates between sphincter-puckering abysses of deep air in the heart of Yosemite National Park. Below my left elbow, the rock plunges several hundred feet to forest. Below my right elbow, a cliff face sweeps downward a dizzying 4,000 feet—that’s 1,000 feet taller than El Capitan. Half Dome lies just a few miles away and below us—a view that makes anyone with a camera feel like Ansel Adams. We can’t help but linger over the vista, which is something considering how rarely we’ll slow down in the coming days. And we’ll do it all in a week. Todd, Mark, and Jeff share my enthusiasm for hiking distances that most people associate with forced marches or bird migrations.

After all, Yosemite is not just any flagship national park—it helped jump-start the very idea of national parks. I swallow hard. 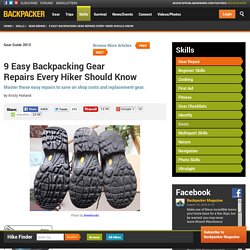 Apply a generous amount of Gear Aid’s Freesole Urethane Shoe Repair ($7; 1 oz.; gear-aid.com) to the worn area (A). Use a plastic knife to spread the goo and level it with the original sole (B). Then, keeping the boots perfectly level (arrange a cradle of bricks or boxes before you start), let the glue cure for 48 hours, remove tape, and hit the trail. Seal a Leaky ShellTiny burns/holes (Less than ¼-inch) First, clean the area with an alcohol prep pad, then back the hole with a piece of tape so the adhesive doesn’t seep through. Medium-size tears and rips (Less than 3 x 3 inches) Trim loose or fraying threads and wipe down the area around the hole with an alcohol pad. Sticky teeth/coilsInspect the cause of the stoppage and remove it. Loose zipperPack lid won’t stay shut?

The Coastal trail to Alamere Falls. A leisurely, scenic, entertaining hike that scales very well for people of different levels of fitness. 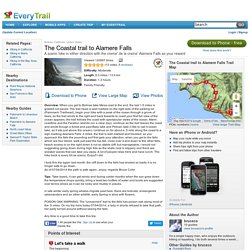 My friends and I arrived around 1:45pm, but were told that there was a high wave warning and were recommended not to go to the beach. You know wha they say, right? YOLO. The first part of the hike is elevated and right along the coast. The view and air is very refreshing, while the walk is relatively leveled. As the trail continues, it alternates between closed off forested areas and wide open spaces. Then there comes the part when you need to make a left onto an unmaintained trail in order to make it to the falls.

The view is stunning. Getting to actual beach is not necessary difficult, but does require some sliding and scrambling. Untitled. The Arroyo Seco Gorge River Hike Arroyo Seco is a full immersion canyoning trip and contrary to its name the arroyo flows all year. 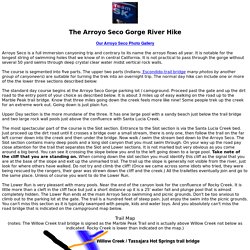 It is notable for the longest string of swimming holes that we know of in central California. It is not practical to pass through the gorge without several 50 yard swims through deep crystal clear water midst vertical rock walls. The course is segmented into five parts. The upper two parts (Indians- Escondido-trail bridge many photos by another group of canyoneers) are suitable for turning the trek into an overnight trip.