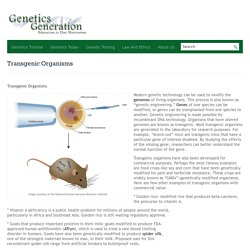 This process is also known as “genetic engineering.” Genes of one species can be modified, or genes can be transplanted from one species to another. Genetic engineering is made possible by recombinant DNA technology. Transgenic organisms have also been developed for commercial purposes. . * Golden rice: modified rice that produces beta-carotene, the precursor to vitamin A. * Vitamin A deficiency is a public health problem for millions of people around the world, particularly in Africa and Southeast Asia. . * Goats that produce important proteins in their milk: goats modified to produce FDA- approved human antithrombin (ATryn), which is used to treat a rare blood clotting disorder in humans. .

* Vaccine producing bananas: genetically engineered bananas that contain a vaccine. CLICK HERE to learn more about recombinant DNA technology. Transgenic Crops: An Introduction and Resource Guide. Introduction to DNA The underlying reason that transgenic plants can be constructed is the universal presence of DNA (deoxyribonucleic acid) in the cells of all living organisms. 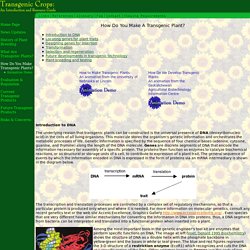 This molecule stores the organism's genetic information and orchestrates the metabolic processes of life. Genetic information is specified by the sequence of four chemical bases (adenine, cytosine, guanine, and thymine) along the length of the DNA molecule. Genes are discrete segments of DNA that encode the information necessary for assembly of a specific protein.

The proteins then function as enzymes to catalyze biochemical reactions, or as structural or storage units of a cell, to contribute to expression of a plant trait. The transcription and translation processes are controlled by a complex set of regulatory mechanisms, so that a particular protein is produced only when and where it is needed. [Top] Locating Genes for Plant Traits Designing Genes for Insertion Transforming Plants Source: Ohio State University. How to make a transgenic plant. 1. 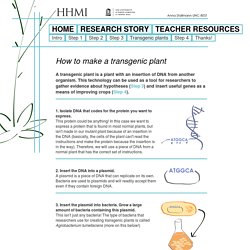 Isolate DNA that codes for the protein you want to express. This protein could be anything! In this case we want to express a protein that is found in most normal plants, but isn't made in our mutant plant because of an insertion in the DNA (basically, the cells of the plant can't read the instructions and make the protein because the insertion is in the way).

Therefore, we will use a piece of DNA from a normal plant that has the correct set of instructions. 2. 3. 4. Agrobacteria have evolved to be able to transfer part of their DNA into plant cells. 6. At this point, we have plants with a specific piece of DNA inserted! These particular plants and the protein that we have been studying throughout the research story represent one small piece in the puzzle of plant immunity. Transgenic animals. Importance Transgenic animals are routinely used in the laboratory as models in biomedical research. 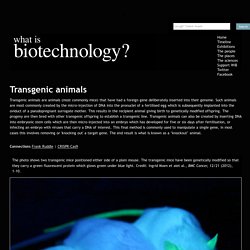 Over 95 per cent of those used are genetically modified rodents, predominantly mice. They are important tools for researching human disease, being used to understand gene function in the context of disease susceptibility, progression and to determine responses to a therapeutic intervention. Mice have also been genetically modified to naturally produce human antibodies for use as therapeutics. Seven out of the eleven monoclonal antibody drugs approved by the FDA between 2006 and 2011 were derived from transgenic mice. Discovery The ability to produce transgenic animals is reliant on a number of components. Application Since the mid-1980s transgenic mice have become a key model for investigating disease.

Methods of Producing Transgenic Mouse (With Diagram) Read this article to learn about the method of producing transgenic mouse. 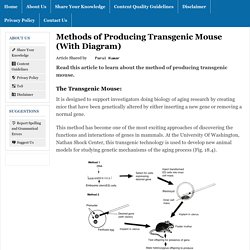 The Transgenic Mouse: It is designed to support investigators doing biology of aging research by creating mice that have been genetically altered by either inserting a new gene or removing a normal gene. This method has become one of the most exciting approaches of discovering the functions and interactions of genes in mammals. At the University Of Washington, Nathan Shock Center, this transgenic technology is used to develop new animal models for studying genetic mechanisms of the aging process (Fig. 18.4). During the previous year, transgenic mouse production has focused on constructs with enhanced defense against free radical injury in aging (e.g., catalase, superoxide dismutase, glutathione S-transferase), Werner Syndrome, adult onset diabetes, Alzheimer’s disease, thrombospondin, and rheumatoid arthritis in aging.