KILLER WHALES (Orcinus orca) - Scientific Classification. Class - Mammalia Mammals are characterized by the following features: Cetacea is a scientific order of large aquatic mammals that have forelimbs modified into flippers, a horizontally flattened tail, one or two nostrils at the top of the head for breathing, and no hind limbs. 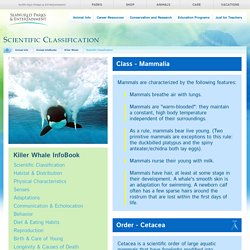 Some scientists suggest that since cetaceans genetically and morphologically fall within the artiodactyl clade, they should be included in the Order Cetartiodactyla with Cetacea as an unranked taxon. Living cetaceans are further divided into two suborders: the Odontoceti (toothed whales) and the Mysticeti (baleen whales). Killer whale - Facts and information. Orcas are the most widely distributed of all whales and dolphins, found in every ocean. 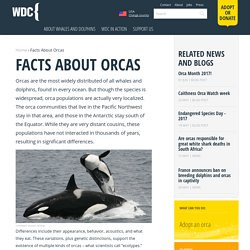 But though the species is widespread, orca populations are actually very localized. The orca communities that live in the Pacific Northwest stay in that area, and those in the Antarctic stay south of the Equator. While they are very distant cousins, these populations have not interacted in thousands of years, resulting in significant differences. Differences include their appearance, behavior, acoustics, and what they eat. These variations, plus genetic distinctions, support the existence of multiple kinds of orcas – what scientists call “ecotypes.” What is an orca? An orca is a marine mammal. What we now know is that not all orcas prey on other cetaceans. What do orcas eat? Killer Whale Evolution - Killer Whale Facts and Information. Killer whales are the only species in the genus Orcinus. 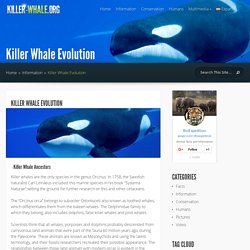 In 1758, the Swedish naturalist Carl Linnaeus included this marine species in his book “Systema Naturae” setting the ground for further research on this and other cetaceans. The “Orcinus orca” belongs to suborder Odontoceti also known as toothed whales, which differentiates them from the baleen whales. The Delphinidae family to which they belong, also includes dolphins, false killer whales and pilot whales. Scientists think that all whales, porpoises and dolphins probably descended from carnivorous land animals that were part of the fauna 60 million years ago, during the Paleocene. 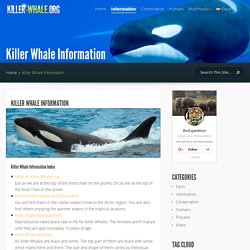 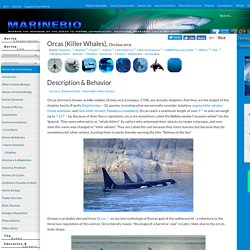 And they are the largest of the dolphin family (Family Delphinidae ~ 32 species, including what we normally consider dolphins, pygmy killer whales, Feresa attenuata, and false killer whales, Pseudorca crassiddens). Orcas reach a maximum length of over 9 m and can weigh up to 7,257 kg. Because of their fierce reputation, orca are sometimes called the Ballena asesina ("assassin whale") by the Spanish. Orcinus is probably derived from Orcus , an ancient mythological Roman god of the netherworld—a reference to the ferocious reputation of this animal. Orca are seen usually traveling in pods of between 3-25 individuals, usually including at least one large male (a male is shown in the foreground of the photo above, notice the difference in the shapes of the dorsal fins). Next to humans, orcas are the most widely distributed mammal. Km up the Columbia River in search of fish.

Orca. About the Orca Orcas, or killer whales, are the largest of the dolphins and one of the world's most powerful predators. 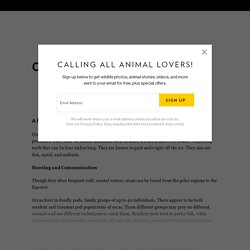 They feast on marine mammals such as seals, sea lions, and even whales, employing teeth that can be four inches long. They are known to grab seals right off the ice. They also eat fish, squid, and seabirds. Hunting and Communication Though they often frequent cold, coastal waters, orcas can be found from the polar regions to the Equator. Orcas hunt in deadly pods, family groups of up to 40 individuals. Whales make a wide variety of communicative sounds, and each pod has distinctive noises that its members will recognize even at a distance. Killer Whale Species Guide - Whale and Dolphin Conservation. Orcinus orca Classification: The orca is the apex predator of the sea and the largest member of the dolphin family. 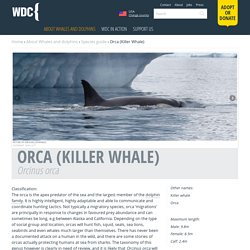 It is highly intelligent, highly adaptable and able to communicate and coordinate hunting tactics. Not typically a migratory species, orca ‘migrations' are principally in response to changes in favoured prey abundance and can sometimes be long, e.g between Alaska and California. Depending on the type of social group and location, orcas will hunt fish, squid, seals, sea lions, seabirds and even whales much larger than themselves. Appearance: The orca, also known as a killer whale, is distinctive in appearance with a large black body, a white underside, a white patch above and behind the eye, and a grey 'saddle patch' behind the dorsal fin At up to nearly 10 metres long, male orcas are larger than females and have a tall dorsal fin - up to nearly 2 metres in height. Behaviour: Orcas are extremely fast swimmers and have been recorded at speeds of up to 54km/h.

Distribution: Killer whale. The killer whale (Orcinus orca), also referred to as the orca whale or orca, and less commonly as the blackfish, is a toothed whale belonging to the oceanic dolphin family. 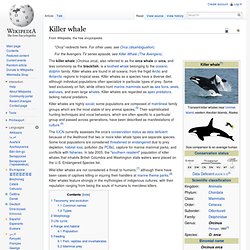 Killer whales are found in all oceans, from the frigid Arctic and Antarctic regions to tropical seas. Killer whales as a species have a diverse diet, although individual populations often specialize in particular types of prey.