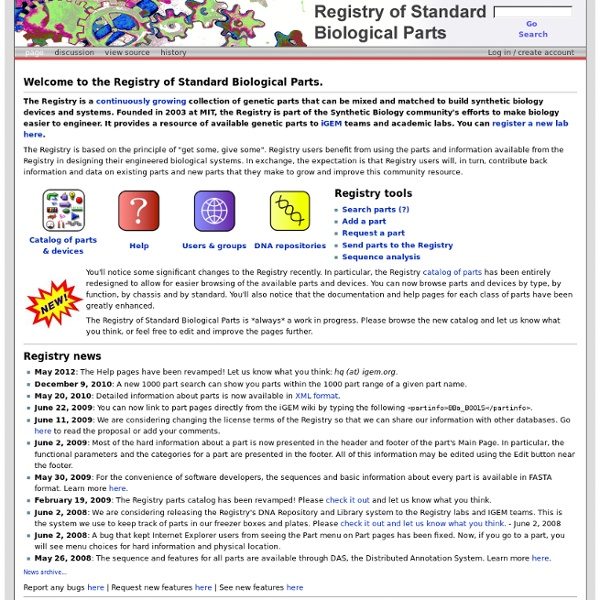 Lasersaur Lasersaur The Lasersaur is an open source laser cutter. We designed it to fill the need of makers, artist and scientist who wanted a safe and highly-capable machine. Unlike others it comes fully loaded with knowledge to run, maintain, and modify. Since its conception, Nortd Labs and the Lasersaur community has generated knowledge to develop a comprehensive system. How can you Contribute? Unlike software, hardware RD is costly even when living off of Ramen. Short on cash? $32 Beta Access: Support the project and get full access to design documents, community (mailing list), and software before the project goes fully open source. $(any) Project Support: Simply want to support the project? We Accept Bitcoin! Credits Mad props to reprap.org, www.cnczone.com, arduino.cc, grbl, buildlog.org, and their giants' shoulders.

Mr. Tompkins Mr. Tompkins in Wonderland where c = 10 km/hr There are many pictures so it may take a few minutes to download this page. The hands of the big clock on the tower down the street were pointing almost to noon and the streets were nearly empty. A single cyclist was coming slowly down the street and, as he approached, Mr Tompkins' eyes opened wide with astonishment. Mr Tompkins did not notice that he gained much in speed, but, as the result of his effort, he flattened still more and went down the street looking exactly like a picture cut out of cardboard. Then, Mr Tompkins felt very proud because he could understand what was happening to the cyclist-- it was simply the contraction of moving bodies about which he had just learned. "Evidently nature's speed limit is lower here," he concluded, "that is why the bobby on the corner looks so lazy, he need not watch for speeders." [It has much more power than a bicycle, so the dilation is greater to observers.] "By Jove! “Speed limit?” “Well ! “Oh!

Generation FAB by Matthew Gardiner on Prezi Kugelblitz (astrophysics) In theoretical physics, a kugelblitz (German: "ball lightning", not to be confused with ball lightning) is a concentration of light so intense that it forms an event horizon and becomes self-trapped: according to general relativity, if enough radiation is aimed into a region, the concentration of energy can warp spacetime enough for the region to become a black hole (although this would be a black hole whose original mass-energy had been in the form of radiant energy rather than matter). In simpler terms, a kugelblitz is a black hole formed from energy as opposed to mass. According to Einstein's general theory of relativity, once an event horizon has formed, the type of mass-energy that created it no longer matters. A kugelblitz is so hot it surpasses the Planck temperature, the temperature of the universe 5.4×10−44 seconds after The Big Bang. A kugelblitz is an important plot element in Frederik Pohl's novel Heechee Rendezvous.

Wiki RepRap is humanity's first general-purpose self-replicating manufacturing machine. RepRap takes the form of a free desktop 3D printer capable of printing plastic objects. Since many parts of RepRap are made from plastic and RepRap prints those parts, RepRap self-replicates by making a kit of itself - a kit that anyone can assemble given time and materials. It also means that - if you've got a RepRap - you can print lots of useful stuff, and you can print another RepRap for a friend... RepRap is about making self-replicating machines, and making them freely available for the benefit of everyone. We are using 3D printing to do this, but if you have other technologies that can copy themselves and that can be made freely available to all, then this is the place for you too. Reprap.org is a community project, which means you are welcome to edit most pages on this site, or better yet, create new pages of your own. RepRap was voted the most significant 3D-printed object in 2017.

DIYLILCNC Arduino - HomePage OpenCola (drink) OpenCola is a brand of open-source cola, where the instructions for making it are freely available and modifiable. Anybody can make the drink, and anyone can modify and improve on the recipe as long as they, too, license their recipe under the GNU General Public License. Since recipes are, by themselves, not copyrightable, the legal basis for this is untested.[1] The flavouring formula for OpenCola is:[2][3] Ingredients of OpenCola 2.36 kg plain granulated white table sugar2.28 L water30.0 mL caramel color17.5 mL (3.50 tsp.) 75% phosphoric acid or citric acid10.0 mL (2.00 tsp.) flavouring formula2.50 mL (0.50 tsp.) caffeine (optional)[2][3] After mixing up the concentrate to the prescribed recipe (including all recommended safety precautions – see links), the syrup is diluted 5:1 with ("preferably sodium-free") soda water to make the finished drink; at this dilution, the above combination of ingredients will yield approximately 24 litres of OpenCola.

How to Make OpenCola Steps Part 1 of 4: Making The Flavoring 1Mix the oils together.Ad 2Add gum arabic and mix.3Add water and mix well. For this step, use a hand mixer or blender to mix thoroughly. Part 2 of 4: Making The Acid Solution from Powder You can make a larger batch for future use or just what is needed, either way you want 75% of the total weight to be the powder and 25% water. 1Measure 13 grams of the acid powder and place in a small glass jar.2Boil a small amount of water (you can microwave 10-20 ml water for about a minute)3Add 4.5 ml of hot water to the powdered acid (enough to bring the total weight up to 17.5 g).4Swirl the solution carefully until the powder is dissolved. Part 3 of 4: Making The Concentrate Part 4 of 4: Making The Soda 1Mix 1 part concentrate with five parts water. Tips Ad Warnings Gum arabic is available in two forms: art grade and food grade.