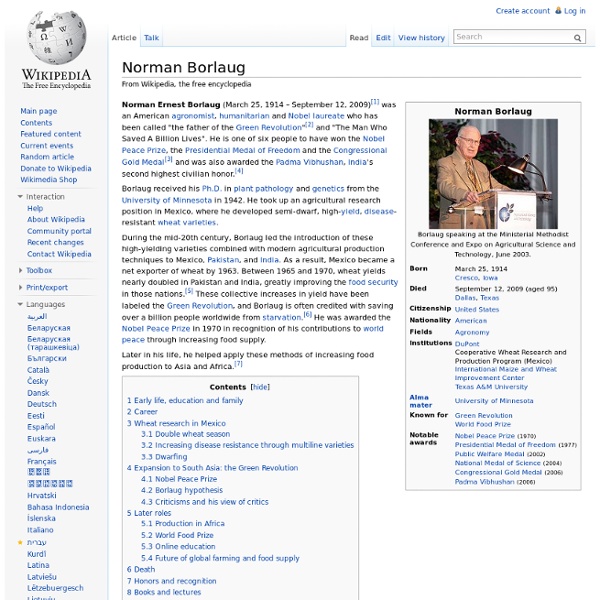 Norman Ernest Borlaug (March 25, 1914 – September 12, 2009)[2] was an American biologist, humanitarian and Nobel laureate who has been called "the father of the Green Revolution",[3] "agriculture's greatest spokesperson"[4] and "The Man Who Saved A Billion Lives".[5][6] He is one of seven people to have won the Nobel Peace Prize, the Presidential Medal of Freedom and the Congressional Gold Medal[7] and was also awarded the Padma Vibhushan, India's second highest civilian honor.[8] During the mid-20th century, Borlaug led the introduction of these high-yielding varieties combined with modern agricultural production techniques to Mexico, Pakistan, and India. As a result, Mexico became a net exporter of wheat by 1963. Later in his life, he helped apply these methods of increasing food production to Asia and Africa.[11] Early life, education and family[edit] Borlaug had the great-grandchild of Norwegian immigrants to the United States. "Wrestling taught me some valuable lessons ...

Green Revolution Increased use of various technologies such as pesticides, herbicides, and fertilizers as well as new breeds of high yield crops were employed in the decades after the Second World War to greatly increase global food production. The Green Revolution refers to a series of research, and development, and technology transfer initiatives, occurring between the 1940s and the late 1960s, that increased agriculture production worldwide, particularly in the developing world, beginning most markedly in the late 1960s.[1] The initiatives, led by Norman Borlaug, the "Father of the Green Revolution" credited with saving over a billion people from starvation, involved the development of high-yielding varieties of cereal grains, expansion of irrigation infrastructure, modernization of management techniques, distribution of hybridized seeds, synthetic fertilizers, and pesticides to farmers. History[edit] Wheat yields in developing countries, 1950 to 2004, kg/HA baseline 500. IR8 and the Philippines[edit]

Haber process The Haber process, also called the Haber–Bosch process, is the industrial implementation of the reaction of nitrogen gas and hydrogen gas. It is the main industrial procedure to produce ammonia:[1] Nitrogen is a strong limiting mineral nutrient in plant growth. Carbon and oxygen are also critical, but are easily obtained by plants from soil and air. Even though air is 78% nitrogen, atmospheric nitrogen is nutritionally unavailable because nitrogen molecules are held together by strong triple bonds. Nitrogen must be 'fixed', i.e. converted into some bioavailable form, through natural or man-made processes. Fertilizer generated from ammonia produced by the Haber process is estimated to be responsible for sustaining one-third of the Earth's population.[6] It is estimated that half of the protein within human beings is made of nitrogen that was originally fixed by this process; the remainder was produced by nitrogen fixing bacteria and archaea.[7] History[edit] The process[edit] energy diagram

Fritz Haber Fritz Haber (9 December 1868 – 29 January 1934) was a German chemist of Jewish origin, who received the Nobel Prize in Chemistry in 1918 for his development for synthesizing ammonia, important for fertilizers and explosives. The food production for half the world's current population depends on this method for producing fertilizer. Haber, along with Max Born, proposed the Born–Haber cycle as a method for evaluating the lattice energy of an ionic solid. Early life, education and early career[edit] Haber was born in Breslau, Prussia (now Wrocław, Poland), into a Hasidic Jewish family. Nobel Prize[edit] During his time at University of Karlsruhe from 1894 to 1911, Fritz Haber and Carl Bosch developed the Haber process, which is the catalytic formation of ammonia from hydrogen and atmospheric nitrogen under conditions of high temperature and pressure.[3] He was awarded the 1918 Nobel Prize in Chemistry for this work (he actually received the award in 1919).[4] World War I[edit] Post-war[edit]

Forgotten Benefactor of Humanity - Gregg Easterbrook Norman Borlaug, the agronomist whose discoveries sparked the Green Revolution, has saved literally millions of lives, yet he is hardly a household name AMERICA has three living winners of the Nobel Peace Prize, two universally renowned and the other so little celebrated that not one person in a hundred would be likely to pick his face out of a police lineup, or even recognize his name. The universally known recipients are Elie Wiesel, who for leading an exemplary life has been justly rewarded with honor and acclaim, and Henry Kissinger, who in the aftermath of his Nobel has realized wealth and prestige. America's third peace-prize winner, in contrast, has been the subject of little public notice, and has passed up every opportunity to parley his award into riches or personal distinction. And the third winner's accomplishments, unlike Kissinger's, are morally unambiguous. NORMAN BORLAUG was born in Cresco, Iowa, in 1914. At the same time, the Midwest was becoming the Dust Bowl.