List of Endangered Bird Species. Thaumatibis gigantea Conservation Attention: Limited Number one on the EDGE birds list, this huge ibis is critically endangered with a population of just over 200 adults. 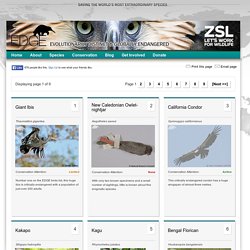 Aegotheles savesi None With only two known specimens and a small number of sightings, little is known about this enigmatic species. Gymnogyps californianus Active This critically endangered condor has a huge wingspan of almost three metres. Strigops habroptila Found only in New Zealand, this charismatic, flightless parrot is slowly being brought back from the edge of extinction. Rhynochetos jubatus This ash-white bird is mainly found in the dense, humid forests of New Caledonia and is known locally as the ‘ghost of the forest’. Houbaropsis bengalensis The Bengal Florican is one of the most threatened bustards in the world.

Heteroglaux blewitti This little owlet was thought to be extinct, until its rediscovery in 1997, almost 113 years after the last confirmed record. Pithecophaga jefferyi Fregata andrewsi Carpococcyx viridis. Push to prevent a last dance for the lesser prairie chicken. HEALY, KANSAS—At first, there's no sound or motion on the dance floor, just the far-off howl of a lone coyote and the rhythmic thump of a distant oil well. 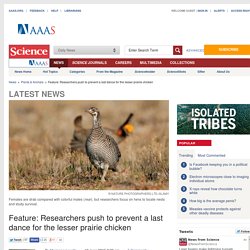 So the scientists wait, keeping a close watch on a scraggly patch of grassland lit only by a crescent moon. Spatial ecologist Tom Lipp, a graduate student at Bowling Green State University (BGSU) in Ohio, sets a sound recorder in a clearing. Avian ecologist Samantha Robinson, who is doing her graduate work at Kansas State University (KSU), Manhattan, zips herself into a snug tent-style blind with a thermos of coffee and a notebook. The coffee is cold by the time the first gobbles ripple through the predawn darkness and the dancers strut in. Soon, nearly a dozen male lesser prairie chickens are cackling, stamping, and showing off fluffy yellow eye combs and the bright red air sacs that balloon from their necks. “That's the scary and exciting part about doing this work right now,” says ecologist Andrew Gregory of BGSU. 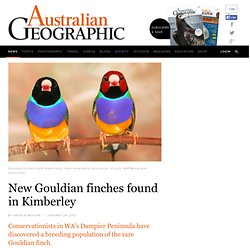 The Gouldian finch (Erythrura gouldiae) was once common in the savannah woodlands across northern Australia, but numbers have dwindled in the past 50 years. The 2500 or so remaining are mostly scattered in the eastern Kimberley around Wyndham, and in parts of the Northern Territory and northern Queensland. But the birds change their breeding and feeding spots from year to year, depending on conditions. Not a transient population Trevor Sampi an indigenous ranger with the Bardi Jawi people says that locals had reported seeing the brightly-coloured birds, but it wasn't until he went to do fieldwork in the bush that he saw them for himself. "The fact that they're breeding there means that the population isn't just a transient population," says Louise Beames, Environs Kimberley projects coordinator. Vulture populations plummet across Africa. One of nature’s best scavengers is under serious threat in Africa, largely from poison. 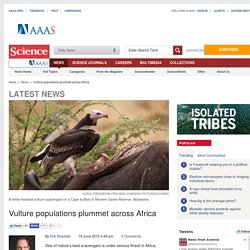 According to the first analysis of African vultures, populations of seven species have fallen by 80% or more over three generations. Most of these species may qualify as critically endangered. “The rates of decline stand out as being pretty rapid,” says conservation biologist Rhys Green of the University of Cambridge in the United Kingdom, who was not involved in the new analysis. The situation for African vultures, he says, “is not yet irrecoverable, but it is serious.” Despite their gloomy reputation, vultures provide valuable services. Worried by reports of vulture declines across the continent, members of the International Union for Conservation of Nature's (IUCN’s) vulture specialist group decided to pull together all the data to figure out the long-term population trends. The main threat appears to be poison. Vultures are also killed for use in traditional medicine. Marvelous Hummingbird of Peru. Teens kill endangered birds, setting back conservation efforts 10 years.

KAPA’A, Hawaii - The first of the bodies was discovered by a hiker who snapped a photo of the suspicious scene with his cellphone. 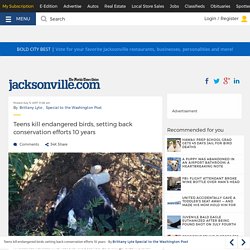 Buried in a nest on the westernmost spit of the Hawaiian island of Oahu was a dead bird the size of a human child. On the ground next to it was a large stick. State conservation officers would later determine that more than a dozen birds had been bloodied and dismembered with a bat, a machete and a pellet gun. Nearby, several smashed eggs were scattered about the craggy, lava rock coast.

That gruesome sight in December 2015 soon became a crime scene, one that eventually implicated six students and recent graduates of a prestigious Honolulu prep school whose alumni include former president Barack Obama. The night of destruction set conservation efforts back nearly a decade and caused more than $200,000 in damage, state and federal investigators say.