Interview with the Vampire: The Vampire Chronicles (1994 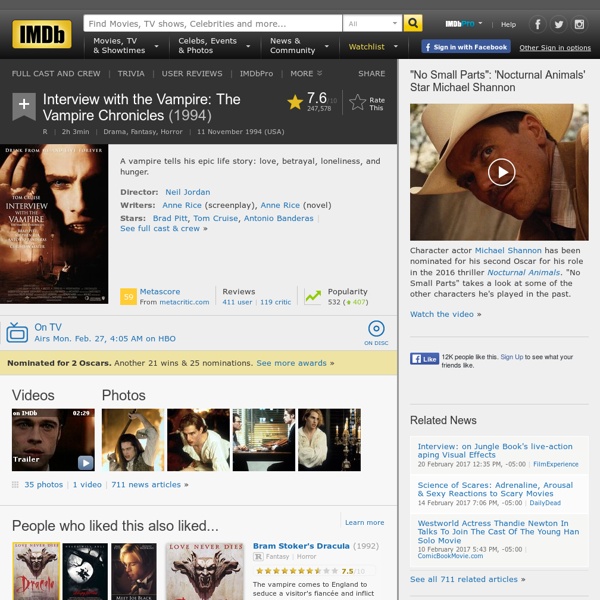 Mary Shelley Mary Shelley (née Mary Wollstonecraft Godwin; 30 August 1797 – 1 February 1851) was an English novelist, short story writer, dramatist, essayist, biographer, and travel writer, best known for her Gothic novel Frankenstein: or, The Modern Prometheus (1818). She also edited and promoted the works of her husband, the Romantic poet and philosopher Percy Bysshe Shelley. Her father was the political philosopher William Godwin, and her mother was the philosopher and feminist Mary Wollstonecraft. Mary Godwin's mother died when she was eleven days old; afterwards, she and her older half-sister, Fanny Imlay, were raised by her father. In 1816, the couple famously spent a summer with Lord Byron, John William Polidori, and Claire Clairmont near Geneva, Switzerland, where Mary conceived the idea for her novel Frankenstein. Biography Early life Page from William Godwin's journal recording "Birth of Mary, 20 minutes after 11 at night" (left column, four rows down) Percy Bysshe Shelley Bath and Marlow

CARMILLA by J. Sheridan LeFanu An Early Fright In Styria, we, though by no means magnificent people, inhabit a castle, or schloss. A small income, in that part of the world, goes a great way. Eight or nine hundred a year does wonders. Scantily enough ours would have answered among wealthy people at home. My father was in the Austrian service, and retired upon a pension and his patrimony, and purchased this feudal residence, and the small estate on which it stands, a bargain. Nothing can be more picturesque or solitary. Over all this the schloss shows its many-windowed front; its towers, and its Gothic chapel. The forest opens in an irregular and very picturesque glade before its gate, and at the right a steep Gothic bridge carries the road over a stream that winds in deep shadow through the wood. Respecting the cause of the desertion of this striking and melancholy spot, there is a legend which I shall relate to you another time. I was now for the first time frightened, and I yelled with all my might and main. A Guest

Gothic Literature Bram Stoker's Dracula Bram Stoker's Dracula is a 1992 American horror fantasy erotic drama film directed and produced by Francis Ford Coppola, based on the novel Dracula by Bram Stoker.[3][4][5] It stars Gary Oldman as Count Dracula, Winona Ryder as Mina Harker, Anthony Hopkins as Professor Abraham Van Helsing, and Keanu Reeves as Jonathan Harker. Bram Stoker's Dracula was greeted by a generally positive critical reception and was a box office hit, although Reeves' performance has been widely criticised. Its score was composed by Wojciech Kilar and featured "Love Song for a Vampire" by Annie Lennox, which became an international hit, as the closing credits theme. Plot[edit] In 1462, Vlad Dracula, a member of the Order of the Dragon, returns from a victory against the Turks to find his wife, Elisabeta, has committed suicide after receiving a false report of his death. In 1897, newly qualified solicitor Jonathan Harker takes the Transylvanian Count Dracula as a client from his colleague R. Cast[edit] [edit]