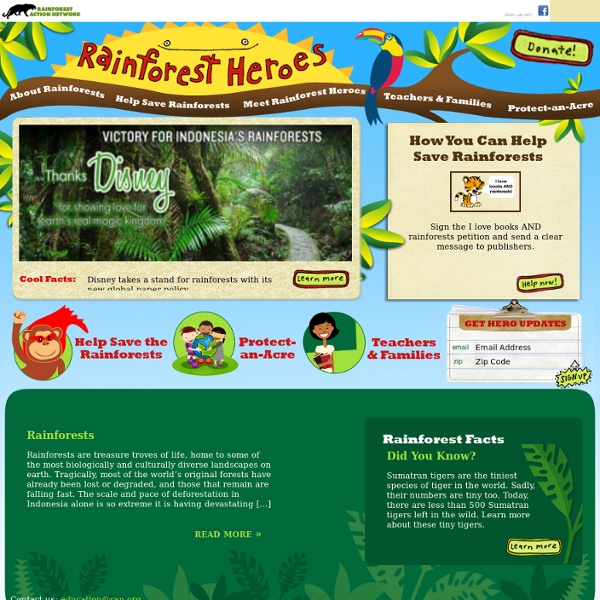 Parcours - Voyages virtuels avec Google Earth Rain Forest Threats, Rain Forest Species More than half of Earth’s rain forests have already been lost forever to the insatiable human demand for wood and arable land. Rain forests that once grew over 14 percent of the land on Earth now cover only about 6 percent. And if current deforestation rates continue, these critical habitats could disappear from the planet completely within the next hundred years. The reasons for plundering rain forests are mainly economic. Wealthy nations drive demand for tropical timber, and cash-strapped governments often grant logging concessions at a fraction of the land’s true value. Threats Solutions WWF: Wildlife Trade What is wildlife trade? Whenever people sell or exchange wild animal and plant resources, this is wildlife trade. It can involve live animals and plants or all kinds of wild animal and plant products. Wildlife trade is easiest to track when it is from one country to another because it must be checked, and often recorded, at Customs checkpoints. Why do people trade wildlife? People trade wildlife for cash or exchange it for other useful objects - for example, utensils in exchange for wild animal skins. For a more detailed list of the various uses of wildlife, visit the TRAFFIC website. What is wildlife trade worth financially? This is a difficult estimate to make. What is the scale of wildlife trade? The trade involves hundreds of millions of wild plants and animals from tens of thousands of species. Why is wildlife trade a problem? Wildlife trade is by no means always a problem and most wildlife trade is legal. Recent overexploitation of wildlife for trade has affected countless species.

Accueil jeux en ligne gratuits de géographie News: Rain Forest For centuries, humans have relied on rain forests for a variety of products. Foods such as tomatoes, peppers, corn, rice, coconuts, bananas, coffee, cocoa, tapioca, beans, and sweet potatoes all originally came from the rain forest. Many civilizations have exploited the timber in rain forests and cleared the land for farms. Some preliterate tribes have actually lived in the rain forests for thousands of years. Today people rely on tropical rain forests for a variety of everyday products: paper (7 percent of all paper pulp comes from the rain forest); rubber (used in tires and other products); wax (used in plastics); mahogany and teak (used in wood products such as furniture); and many other items. Destructive Activities Unfortunately, human activities have taken a toll on the rain forest. Farming. Cattle ranching also poses a danger to rain forests. Logging. Other activities. Destruction Aftermath Soil and erosion. Flora and fauna. Climate. Copyright © 2002 Grolier Incorporated.

Rain Forest In Brazil, which houses 30 percent of the remaining tropical rain forest on Earth, more than 50,000 square miles of rain forest were lost to deforestation between 2000 and 2005. Biologists worry about the long-term consequences. Drought may be one. Some rain forests, including the Amazon, began experiencing drought in the 1990s, possibly due to deforestation and global warming. Efforts to discourage deforestation, mainly through sustainable-logging initiatives, are underway on a very limited basis but have had a negligible impact so far. The rain forest is nearly self-watering. Plants in the rain forest grow very close together and contend with the constant threat of insect predators. The National Cancer Institute (NCI) estimates that 70 percent of the anti-cancer plants identified so far are rain forest plants. Many trees and plants, like orchids, have been removed from the rain forest and cultivated.