The Rate of Extinction: 3 Species per Hour 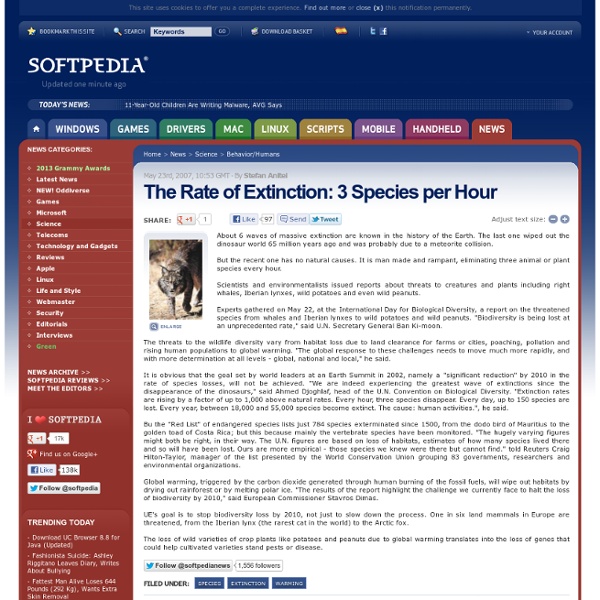 About 6 waves of massive extinction are known in the history of the Earth. The last one wiped out the dinosaur world 65 million years ago and was probably due to a meteorite collision. But the recent one has no natural causes. It is man made and rampant, eliminating three animal or plant species every hour. Scientists and environmentalists issued reports about threats to creatures and plants including right whales, Iberian lynxes, wild potatoes and even wild peanuts. Experts gathered on May 22, at the International Day for Biological Diversity, a report on the threatened species from whales and Iberian lynxes to wild potatoes and wild peanuts. The threats to the wildlife diversity vary from habitat loss due to land clearance for farms or cities, poaching, pollution and rising human populations to global warming. determination at all levels - global, national and local," he said. UE's goal is to stop biodiversity loss by 2010, not just to slow down the process. Related:  Recent Extinctions (1600 - 2022) • Endangered Animals

Scottish Wildcat Association Tasmanian tiger DNA 'lives' again Seventy years after the ferocious Tasmanian tiger went extinct, its marsupial DNA has been resurrected inside mice. This is the first time that genetic material from an extinct animal has functioned inside a living host. The technique has huge potential, say the researchers. For instance, it might help to reveal how dinosaurs or Neanderthals looked. Andrew Pask at the University of Melbourne, Australia, and colleagues extracted DNA from four 100-year-old Tasmanian tiger, or thylacine, samples. The samples were taken from three infant animals preserved in alcohol and one adult pelt. The DNA was badly fragmented, but the team managed to isolate one specific DNA sequence from each of the animals. Bigger questions The team then copied the DNA snippet, coupled it with a gene that produces a blue pigment, and injected it into very early mouse embryos. "We could see it very clearly in the developing cartilage," says Pask. This work isn't a step towards cloning the entire thylacine, Pask stresses.

Amur leopard cub is born in Germany The birth of an Amur leopard cub at Germany's Leipzig Zoo is huge news for her species, which is critically endangered. The cub, a female who hasn't yet been named, was born at the zoo in late June. Amur leopards, native to eastern Russia, parts of China and the Korean Peninsula, have been driven nearly to extinction, primarily as a result of habitat loss and fragmentation. In a period of less than 15 years during the 1970s and '80s, about 80% of its Russian habitat was lost. Another issue facing the species is poaching, since their impressively patterned coats fetch high prices on the black market. Today, it's estimated that fewer than 40 Amur leopards remain in the wild in Russia, and an even smaller number are thought to remain in China. See more photos of the Leipzig Zoo's cub after the jump. RELATED CUTE CUBS: Your morning adorable: Clouded leopard cubs make their debut at Paris zoo Your morning adorable: Lion cubs get a checkup at Israeli zoo -- Lindsay Barnett

Saola Caught in Asia 16 September 2010Last updated at 14:59 By Katia Moskvitch Science reporter, BBC News There may only be a few dozen of Saola left in the wild An extremely rare animal known as the "Asian unicorn" - in spite of having two horns - has been caught by villagers in Laos. No biologist has ever reported seeing the rare Saola in the wild and there are none of them in captivity. The animal was discovered in the forests of South-East Asia as recently as 1992. There have only been a few photos of the Saola taken so far, by villagers and automatic camera traps. The Saola - Pseudoryx nghetinhensis - is believed to inhabit the Annamite Mountains of Laos and Vietnam, and that is where villagers from Laos' central province of Bolikhamxay caught the unfortunate adult male earlier this August. They brought the mammal back to the village. Unfortunate death Surprised by the odd-looking animal, the villagers took a few photos and notified the Lao authorities. New species Not much time

Extinct frog hops back into the gene pool In what may be considered an early Easter miracle, an extinct species of native frog has begun its rise from the dead. Australian scientists have grown embryos containing the revived DNA of the extinct gastric-brooding frog, the crucial first step in their attempt to bring a species back to life. The team from the aptly named Lazarus project inserted the dead genetic material of the extinct amphibian into the donor eggs of another species of living frog, a process similar to the technique used to create the cloned sheep Dolly. Extict since 1983: The bizarre gastric-brooding frog. "This is the first time this technique has been achieved for an extinct species," said one of the project scientists, conservation biologist Michael Mahony. Advertisement While many scientists have argued it would be impossible to bring a species back from the dead like in the film Jurassic Park, the Lazarus project's breakthrough suggested the revival of extinct species was no longer the realm of science fiction.

Iberian Lynx, Most Endangered Wild Cat (ENDANGERED SPECIES) Hope for the world’s most endangered wild cat, the Iberian lynx, has arrived! For the first time, scientists have successfully collected and preserved the feline’s embryos which may help save the species. The cat’s declining population is in critical condition with less than 200 accounted for a decade ago. Scientists hope that by preserving the embryos, they may be able to use surrogate mothers from closely related species to boost the Iberian lynx population. The Iberian lynx is the world’s most endangered wild cat. Live Science, Megan Gannon It seems counterintuitive that castration could help save a species facing extinction. Conservationists are hoping the fertilized eggs could be implanted into a surrogate mother of a closely related species, possibly a Eurasian lynx female. But immediately after Azahar’s castration surgery, scientists say they obtained embryos and ovarian pieces from the feline in a process adapted from one used on domestic cats.

Shocking Study Finds Lions are Nearly Extinct in West Africa Physically and emotionally demanding. That’s how Philipp Henschel, Lion Program Survey Coordinator for the big-cat conservation organization Panthera, describes the six years he and other researchers spent combing the wilds of 17 nations looking for the elusive and rarely studied West African lion. The results of their quest were disheartening to say the least. Back in 2005, before the survey began, West African lions were believed to live in 21 different protected areas. But now a paper about the survey, published today in PLoS One, confirms that lions actually exist in just four of those sites. Worse still, the researchers estimate that the total population for West African lions is only about 400 animals, including fewer than 250 mature individuals of breeding age. Although shocking, the news of the lions’ near extinction should probably not come as a surprise given the context of the region. Devastating Realization But their work was not completely in vain. The Counts What Comes Next?

Elephant bird Description[edit] Size of Aepyornis maximus (centre, in purple) compared to a human, an ostrich (second from right, in maroon), and some non-avian theropoddinosaurs. Each gridline is one meter in height The elephant birds, which were giant ratites native to Madagascar, have been extinct since at least the 17th century. Étienne de Flacourt, a French governor of Madagascar in the 1640s and 1650s, mentions an ostrich-like bird said to inhabit unpopulated regions.[2] The explorer and traveler Marco Polo also mentions very large birds in accounts of his journeys to the East during the 12th and 13th centuries. These earlier accounts are today believed to describe elephant birds.[3] Aepyornis, believed to have been more than 3 m (10 ft) tall and weighing close to 400 kg (880 lb),[4] was at the time the world's largest bird. Species[edit] Genus Aepyornis Genus Mullerornis Etymology[edit] Mullerornis agilis The ancient Malagasy name for the bird is vorompatra, meaning "bird of the Ampatres".

First U.S. Bumblebee Officially Listed as Endangered It’s official: For the first time in the United States, a bumblebee species has been declared endangered. The rusty patched bumblebee (Bombus affinis), once a common sight, is “now balancing precariously on the brink of extinction,” according to the U.S. Fish and Wildlife Service. Advocates for the rusty patched bumblebee’s listing are abuzz with relief, but it may be the first skirmish in a grueling conflict over the fate of the Endangered Species Act under the Trump administration. On January 11, the U.S. The delay had been the subject of a tense legal battle: On February 14, the Natural Resources Defense Council filed suit against the U.S. “The Trump administration reversed course and listed the rusty patched bumblebee as an endangered species just in the nick of time. Busy as a Bee The threats facing those seven species are similar to the ones that have depleted rusty patched bumblebee populations: loss of habitat, diseases and parasites, pesticides, and climate change. The U.S.

Extinct Galapagos Giant Tortoises Could Be Brought Back To Life When Lonesome George died in 2012, it was thought that so did the last Pinta Island giant tortoise. Discovered roaming the rocky island in the Galapagos archipelago on his own in 1972, it was believed that he was the last of his subspecies. Despite a global search to find him a mate, it proved fruitless over the 80 years of his life. Now, Yale researchers think that his DNA might live on (or at least that of his relatives), diluted in hybrid tortoises found on another island descended from tortoises thrown overboard 150 years ago. The tortoises, originally found living on seven of the Galapagos Islands, are divided into 15 subspecies, of which only 11 survive to this day. Divided into two different types depending on the shape of their shell, the tortoises are known as either domed or saddlebacked. Giant galapagos turtle munching on Floreana. But how did the original purebred tortoises get so far from the islands on which they originated?