This collection of websites is based on the list of endangered species from the Melbourne Zoo. 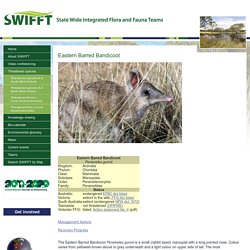 Colour varies from yellowish-brown above to grey underneath and a light colour on upper side of tail. The most distinguishing feature is the three or four pale bars on the hindquarters. Formerly widespread throughout western Victoria, the Eastern Barred Bandicoot is now considered 'extinct in the wild' in Victoria (DEPI 2013). Eastern Barred Bandicoots are extinct in South Australia but still occur in Tasmania, although are genetically different to the Victorian population. Habitat & ecology Natural habitat comprises tall, dense native grasslands and grassy woodlands, although remnant populations have adapted to modified habitats provided there is adequate shelter and effective control of predators. In Victoria, home range varies between 13 to 20 hectares for males and 2 to 3 hectares for females with some overlap in areas. Threats Back to top. Earless dragon. 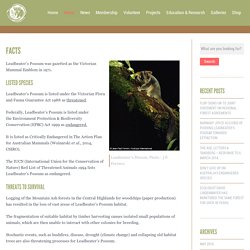 The IUCN (International Union for the Conservation of Nature) Red List of Threatened Animals 1994 lists Leadbeater’s Possum as endangered. Threats to Survival Logging of the Mountain Ash forests in the Central Highlands for woodchips (paper production) has resulted in the loss of vast areas of Leadbeater’s Possum habitat. The fragmentation of suitable habitat by timber harvesting causes isolated small populations of animals, which are then unable to interact with other colonies for breeding. Juvenile Leadbeater’s Possum. Mountain Pygmy Possum Habitat, Diet & Reproduction. The Mountain Pygmy-possum is mainly grey-brown with paler grey/brown to cream underneath. 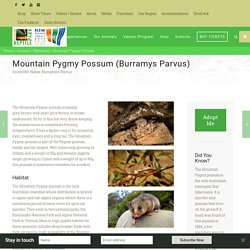 Its fur is fine but very dense keeping the animal warm in sometimes freezing temperatures. It has a darker ring of fur around its eyes, rounded ears and a long tail. The Mountain Pygmy-possum is part of the Pygmy-possum family and the largest. With males only growing to 110mm and a weight of 55g and females slightly larger growing to 111mm and a weight of up to 80g this possum is sometimes mistaken for a rodent. Habitat The Mountain Pygmy-possum is the only Australian mammal whose distribution is limited to alpine and sub-alpine regions where there is a continuous period of snow cover for up to six months. 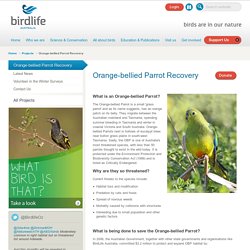 The Orange-bellied Parrot is a small 'grass parrot' and as its name suggests, has an orange patch on its belly. They migrate between the Australian mainland and Tasmania, spending summer breeding in Tasmania and winter in coastal Victoria and South Australia. Orange-bellied Parrots nest in hollows of eucalypt trees near button grass plains in south-west Tasmania. Sadly, the OBP is one of Australia's most threatened species, with less than 50 parrots thought to exist in the wild today. It is protected under the Environment Protection and Biodiversity Conservation Act (1999) and is listed as Critically Endangered. Why are they so threatened? Current threats to the species include: Habitat loss and modification Predation by cats and foxes Spread of noxious weeds Mortality caused by collisions with structures Inbreeding due to small population and other genetic factors.

Regent Honeyeater. Pseudomys fumeus (Smoky Mouse) Menkhorst and Broome (2006) noted that ‘there are no data on which to base population estimates or to estimate trends, but some studied populations have clearly declined’. 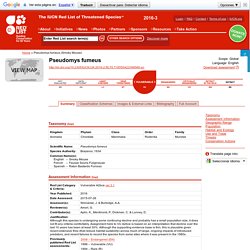 Menkhorst et al. (2008) considered that there were fewer than 2,500 mature individuals, and no subpopulation contained more than 250 mature individuals, but the assessment of population size is likely to be a substantial under-estimate, given recent results from remote camera studies in the Eastern Highlands (P. Menkhorst pers. comm. in Woinarski et al. 2014). Far larger populations were evident at some sites in recent decades, notably at Mt William in the Grampians where Cockburn (1981a) reported 701 captures from 9,600 trap-nights at two grids totalling about six hectares, over the period 1976 to 1979.

However, this abundance was not typical of other sites, and the species has declined substantially at Mt William since (Menkhorst 1995, Nelson et al. 2009). Distribution – Corroboree Frog. Frogs of Australia > Search for a frog.